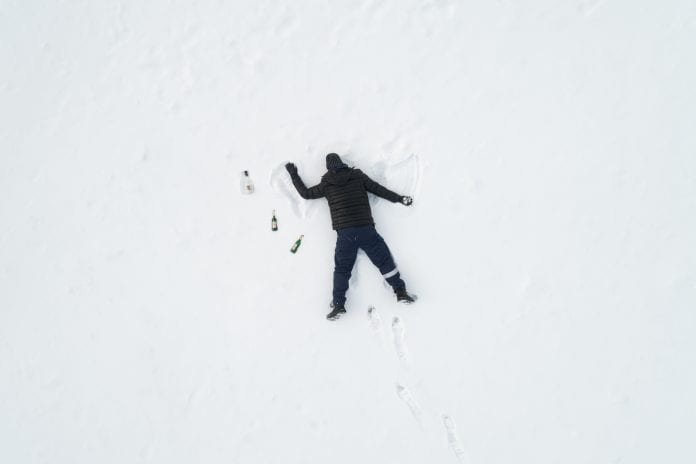 The pure joy that skiing brings is a powerful force, calling people to travel thousands of miles from home to experience that perfect turn. Some people uproot their lives in order to be closer to better terrain, more snow, and a certain type of ski culture.

I know, because I am one of them, moving from the east coast slopes I grew up on to the blower powder and mega terrain of Utah.

Waking up at midnight to hike hours in the dark for a perfect day of skiing is one of my favorite activities, as well as asking a liftie at the end of the day if I could take the very last chair.

I have in years gone by always ended up being about on par or often at least a little bit better than everybody else I was with. In my mind I had to hold something over somebody all the time.

Like life, I originally saw skiing as a competition and I had to make it known that I lead the pitch, I organised the ride, and I could ski it better than you.

While I was never a big bar guy, I loved having people over after skiing for food and beers. It was cheaper and it was certainly more fun to fall asleep at home, rather than figure out rides.

But because I always had something to prove, I was always on a mission to be the drunkest one.

If I didn’t drink the most beers numerically, I still had to be the drunkest, then charge through the next day on skis.

Sometime during a ski season, I noticed that it was harder to wake up after trying to not drink too much (then drinking too much). So I started drinking more coffee, then I was late time and time again to ski meetings.

Doing another run fell away to the early bird special at the bar earlier and earlier in the day, and I started to relish driving back home from the ski area with a healthy buzz. After all, in my mind, everybody else was doing the same thing.

It took a few of these earlier and earlier après days, plus the realisation that I was sucking down beers on the way to my retail job as well as on the clock, for me to realize that I needed to slow down. So I took a month off.

Most months have 30 days, so I decided to celebrate my sober month on day 28. Another two days would have been easy, anybody can do that. I couldn’t, and life started to suck. Drinking wasn’t fun anymore, but it was the only way I knew how to not be unhappy.

Nothing felt fulfilling, I had no idea what I was going to do after I graduated from college, and the feeling to socialise on a level more intimate than a chairlift ride was gone.

I was lonely and blacking out four nights a week.

What really pushed me over the edge was the night I blew off my best friend. We had not recreated together in a solid while, and it was a beautiful summer evening. I got invited to go to a party with the words “there will be more free booze than you can drink” and dropped his ass faster than an empty bottle.

I didn’t know anybody at the party except for the guy who invited me, all the people there were married so I probably wasn’t getting laid, and we brought sleeping bags because we planned on getting sloshed and then sleeping in the back of his truck. When I realized that I had blown off my best friend in exchange for free booze, it was some hazy hour of the night.

I found that the only thing I could do after this realization was to pick up another beer and suck it down fast enough, and when I realized that my solution to the problem I created was to drown it, a white-hot anger seared through me.

That was my last drink.

For a few months, I lived the same way, but replaced the booze and weed with adrenaline. Free soloing easy climbing routes that summer, but trying to get my time down lower and lower.

Blowing people off because what they wanted to do wasn’t rad enough for me, but in retrospect, I was pretty mediocre at all of it.

I made stupid choices that any young adult male might make, but coupling it with the selfishness, isolation, and general assholeness, it was a very unsustainable and hard way of living. After weeks and weeks of bottle free living, I was pretty healthy. I could run faster, climb harder and longer, and had done incredible things that I never thought I would do. It was awesome and I was on top of the world.

Then after a few months of kicking ass and taking names and not drinking, I proudly reached out to a friend who had posted that he had over 20 years of sobriety. I told him that I had 7 months of not drinking, and he congratulated me, then asked me if I was working a program of some kind.

Of course not, programs and support groups are for losers who get sent to them by judges and angry family members. Everybody knows that. This guy quickly informed me that he works a program and goes to support groups, and that there are all kinds of them out there to suit different needs.

He told me that we needed to go to one together. So I did, and I can still feel the cold aluminum of the door handle when I walked into my first Alcoholics Anonymous meeting. It was by far the scariest thing I had ever done to date.

I learned a lot that night, and at a few other meetings I went to. People who I never would have cared for said some really pertinent things.

As a skier, I could not fathom taking any kind of advice from somebody who lived in a hot flat state, but a man from Texas got up and told his story of living a selfish, isolating, irritable life before he made some major changes.

I hated that man for making so much sense.

After hearing people in meetings speak with complete honesty and having their stories resonate strongly with how I felt, I started to re-examine my life. I had swapped the booze and weed for recreation. While I was physically healthier, I was burning bridges and I was not emotionally healthy at all.

There was a serious few months in my life that I thought that I would have to give up what I had built my identity around so much. I would die if I had to give up skiing and climbing and riding bikes and playing in the hills. I was using them the same way I was using alcohol and booze. I wanted to numb my emotions with sweat and fear and leave my problems behind, unsolved.

After laying this matter before some of my new friends, they suggested that I just plain keep skiing and climbing and whatever else. Changing one thing at a time would be enough, and to focus on the simple things.

I could still go skiing and solve my problems like an adult. I could include other people and help them and be grateful for the opportunity to slide on snow and fly through the air, rather than fuss about not being better than last time. Ambition did not have to go away, but I did need to learn to not rub my conquests of the useless in the faces of others, or put others down.

Turning to skiing and the mountains to carry me through my initial sobriety followed by questioning if they were healthy for me to participate in was a real emotional roller coaster.

When the shit hits the fan or a deadline is coming up or the traffic sucks, going into the mountains to “ski it off” or “climb about it” seemed like a great activity. It turned out to be far easier to go into the hills with a clearer conscious, and I could perform noticeably better.

It might be a few more years of maturity and a more grown together frontal lobe, but putting the booze away certainly makes me think clearer.

Life feels precious and worth preserving, rather than losing like a martyr for recreation. Instead of making a day about what I can do, it feels much better to see what I can do with the day.

If you are experiencing addiction issues or struggling with alcohol this is a useful page of resources to help.

Please help SnowsBest remain your independent source of snow news this winter with a “Covid contribution“, from as little as $1, so we can continue to deliver the news and content you value in a season when we need each other most. Contribute here.

READ MORE
Adrenaline, depression and death in the snow world
Share with your crew
533FacebookTwitterLinkedInEmailPinterest
533
SHARES