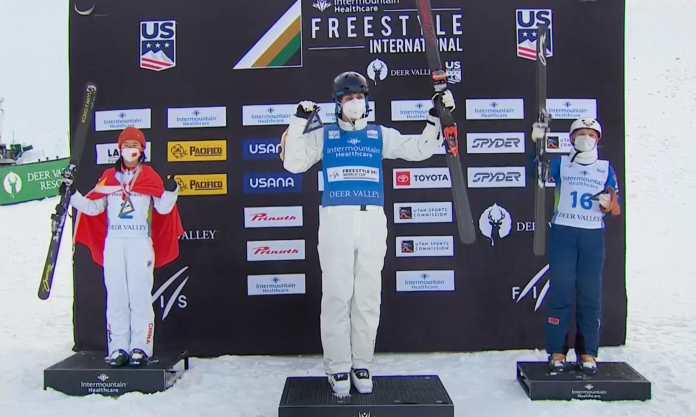 The first day of competition at the Intermountain Healthcare FIS Freestyle Skiing moguls World Cup at Deer Valley Resort (USA) went down in a big way.

Peel then came in for the big final win with one of the highest scores seen in the women’s aerial competition in recent years, 118.05.

Despite struggling with landings so far in the World Cup campaign, Peel’s resilience and patience paid off big time in Deer Valley, after the 32-year-old stomped a squeaky clean Full-Full-Full, for which she received the massive score.

The Australia outscored the rest of the field by over 35 points. The second place went to China’s Kong Fanyu, who continues to showcase a steady and high form with her fourth top-3 finish so far in 2021/22. In the big final on Wednesday, however, Kong failed to land her Lay-Full-Full properly, throwing a little front flip on the landing, and with crash score of 84.58 points she finished in a runner-up position.

Hanna Huskova, who will be defending her gold Olympic medal from PyeongChang in just over three weeks from now, rounded out the women’s podium in third place with 82.65 points for her Lay-Full.

Scott finished the event fourth with a score of 80.27 for a back full full full.

This is the final event before the Beijing Oympics next month.

READ MORE
Hakkoda ski resort and beyond, the best of Aomori in Japan
Share with your crew
FacebookTwitterLinkedInEmailPinterest

The good, the bad and the downright ugly of the Beijing Games

Gallery: Team Australia wraps up with the Beijing Closing Ceremony