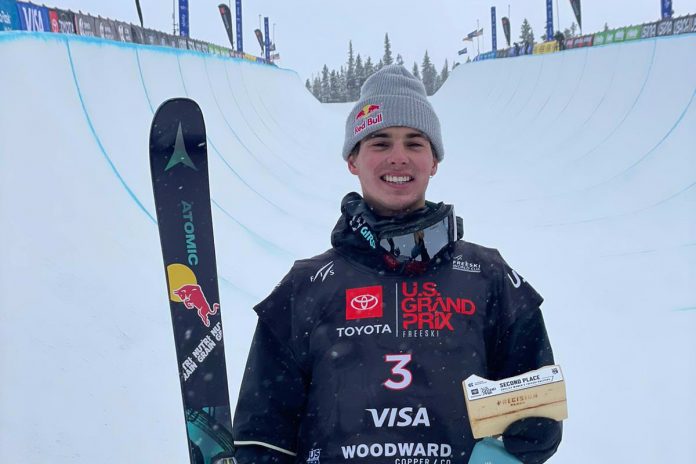 Nico Porteous has claimed his first Freeski Halfpipe World Cup medal of the 2021/22 season with a second-place finish at Copper Mountain, Colorado.

The ten finalists had three runs to put down their best score, judged on the difficulty, variety and execution of their tricks and the amount of amplitude they could gain above the lip of the 22-foot high superpipe.

Top qualifier, Nico was the last competitor to drop into the pipe and had a first-run score of 93.5 to beat, with PyeongChang silver medallist Alex Ferreira (USA) holding the lead. A clean run incorporating his left double cork 1620 was good for a score of 92.25, landing the Kiwi into second place with a step up run still up his sleeve.

Stormy conditions meant the pipe was running slow and competitors struggled to get the amplitude they needed for their biggest tricks. Nico added a new switch double 900 on his second run, giving him five doubles in one run for the first time, but the execution wasn’t clean enough to improve his first run score or nudge the American out of the top spot.

Unable to get a clean run down on his final attempt Nico would finish his day with a World Cup silver medal,  a positive start to the season and good training ahead of the upcoming Beijing Olympic Winter Games in February.

“I’m really happy with the way I skied,” he said. “I gave it my all. I’ve never done a full run of doubles before, so I was happy with that. They weren’t the cleanest so that’s something to work on in the future.”

Only two points separated the podium placegetters with Alex Ferreira taking gold with 93.5, Nico Porteous silver with 92.25 and Canadian Brendan Mackay in bronze on 91.50 points.