What it’s really like skiing the world’s most iconic resorts?

We asked Abi Butcher to give us her rundown on the bucket list destinations of Chamonix, Verbier and Jackson Hole.

She gave us the pros and cons of each, so you can decide which to tick off your list first.

Ever since Greg Stump skied the Couloir Poubelle off the Aiguille du Midi in the Blizzard of Aahhhs, Chamonix has been hailed as one of — if not the best freeride resort in the world, and one that no self-respecting skier should leave off their bucket list. Sitting in the shadow of the famous Mont Blanc, the scenery in “Cham” is dramatic and the skiing steep — it’s every bit as good as the movies. Chamonix is of course home to the Vallée Blanche, the most famous off-piste descent in the world, and definitely one of the longest, at 18km.

The downside of all this is that the place gets busy, with a lot of testosterone and competition especially when the forecast is for snow…

Chamonix town is big and bustling, so it’s a place to sit and absorb. This is a place for extreme skiers, mountain guides and mountaineers — even the equipment left outside bars is next-level. But this comes with benefits: there are numerous mountain guides/training schools teaching mountain craft and off-piste skills, much of which is set up for solo skiers or small groups so very affordable (don’t ever think about going off-piste / venturing into the backcountry without a mountain guide here).

Because of its size, Chamonix is also relatively affordable and it’s also easy to reach — just an hour from Geneva airport with great bus links.

Gnarly skiing — serious challenges and steeps for adventurers
Authentic French town with a real adventure vibe
Home of the famous Vallée Blanche, one of the world’s longest off-piste runs
Masses of mountain schools to upskill

Separate mountains with bus travel required
Not great for piste skiers especially of different abilities
Serious race for first tracks after snowfall, queues can build at lifts
Chamonix town gets busy and only one lift/mountain directly from the town

Verbier has it all: gnarly skiing, serious freeride terrain and epic nightlife, but also reasonable amounts of piste skiing, runs that the Swiss call “itineraries” that are essentially avalanche-patrolled “off-piste” — such as the famous Tortin or Vallon d’Arbi.

The skyline is epic, with views from the summit of Mont Fort, the highest peak in the 4 Vallées, taking in the Matterhorn and Mont Blanc, as well as the Rhone Valley.

You need stamina for this Swiss gem. It is a serious skier’s town — the final stop and birthplace of the Freeride World Tour — but Verbier is also serious party town attracting celebs and royals in equal measure, many of whom you might be rubbing shoulders with at the end of the night in its infamous nightclub, The Farm.

Verbier’s town is purpose-built, but not in the big purpose-built block way once favoured by the French; the chalets, hotels and apartment blocks are (in the main) charmingly clad in wood and stone. It’s not the cheapest place to stay, but there are some good-value hostels, huts, 3* hotels and Airbnb’s dotted around if you look hard enough.

Because it’s such an iconic destination, Verbier gets busy, especially at the peak times of Christmas and New Year, but with a ski area spread over 412km (for which you need a 4 Vallées ski pass, not just Verbier) so there is masses of skiing for all levels, all day long.

Switzerland is immaculate, and everything runs like clockwork (yes, really)
The terrain is steep, with itineraries offering avalanche-patrolled off-piste
Attractive town, slick transport and efficient lift network directly from the village
Verbier knows how to party

Pricey to eat, drink, ski, stay and party
Elbows out after a dump — everything gets tracked out quickly
Glitzy side to the resort is somewhat off-putting
Ski area gets busy especially at peak periods

Where else might you come across a 700kg moose while skiing, drop into the most famous couloir in the world and then sit in a western ranching saddle, sipping a beer? Only in Jackson Hole. This Wyoming resort is so next level for just about everything: scenery, steepness, snow record, party atmosphere and serious skiing that it’s not hard to nail down exactly why this deserves its place at the top of skiers’ To Do lists.

Start the day by riding the iconic Jackson Hole Tram and stopping for a coffee and Top Of The World Waffle at Corbet’s Cabin, a tradition in itself, and the best way to savour the 360-degree views of the Tetons and Jackson Hole Valley. Without going out of the gates, there’s more than enough steep, double-black diamond chutes and tree runs to keep a good skier busy, accessing some of the most challenging skiing on the planet without the expense of hiring a guide.

Jackson Hole is part of the Ikon Resorts conglomerate (so the lift ticket is cheaper if you have an Ikon Pass), but sadly means that weekends are busy with American skiers flocking by car to the Big Hills, so ski mid-week.

The main town filled with cowboy saloons, pool halls and wooden walkways is a half-hour drive from the base of the ski area — which is a fun spot as well — but the two, like many US resorts, are a bus ride away from each other.

Make the most of your time there and visit the Yellowstone and Grand Teton National Parks and make sure to come home with a Stetson. 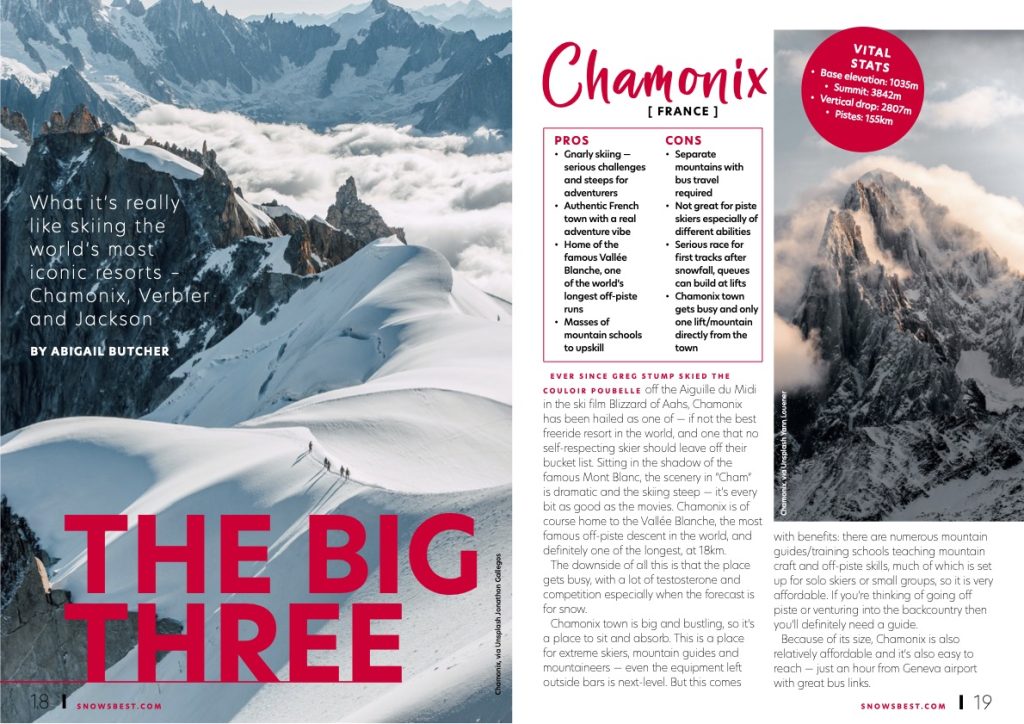