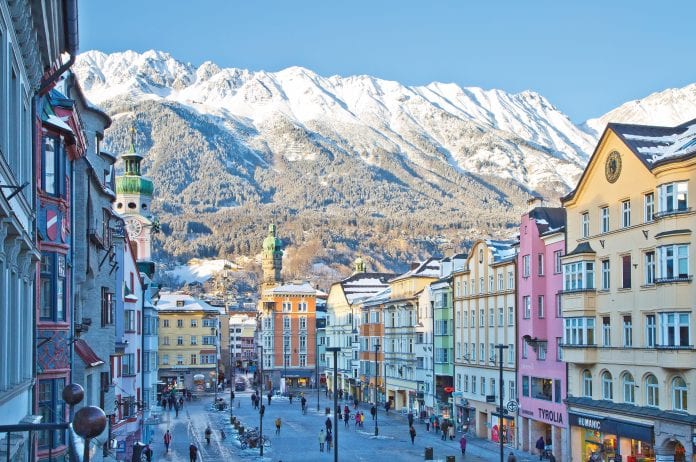 Some ski and snowboard destinations tug at the soul with majestic peaks and cobble-laned towns steeped in centuries old history. If you long for ski towns of old then you’ve come to the right place.

Welcome to Innsbruck, Austria, where skiing and boarding comes with backdrops from Mother Nature just begging for your Instagram. This picture perfect city is set in an ampthitheatre of Austrian Alps where you can mix powder pitches by day with urban style by night and sleep downtown in city lights or in charming villages that surround the outskirts.

Here’s 9 reasons you need Innsbruck and the Ski Plus City pass in your life this winter, next or every winter.

13 ski areas on the one pass

Not just any ski areas, either. Austrian ski areas, the home of big mountain landscape skiing and boarding. Hit the largest glacier in the country, the Stubai Glacier for alpine skiing. Take the cable car from Innsbruck to Nordkette for family skiing combined with freeriding with a city view.

Burn the thighs on 46 kilometres of piste at Kühtai, take the kids to Hochötz or ski through a forest at Muttereralm and challenge yourself on the Elferbahnen ski and tobbogan area or drink in the views at Bergeralm. 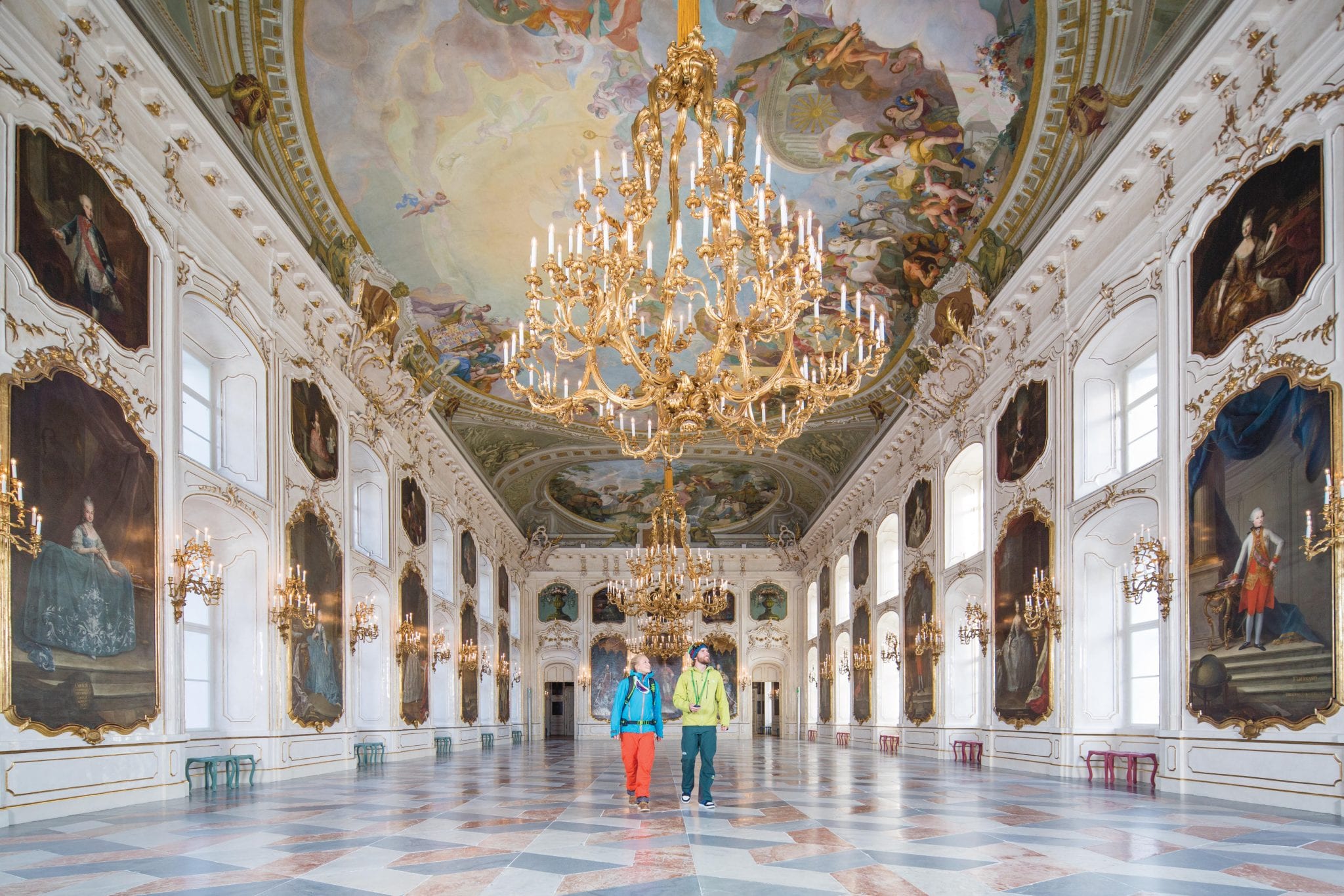 When the chairlifts stop for the day or you need some down time then hit up any of the 22 tourist adventures included on the pass – from the Imperial Palace to the city’s numerous museums, castles, ice skating and even a bell foundry. Take a 3 hour bike hire (also included) and cycle the city. 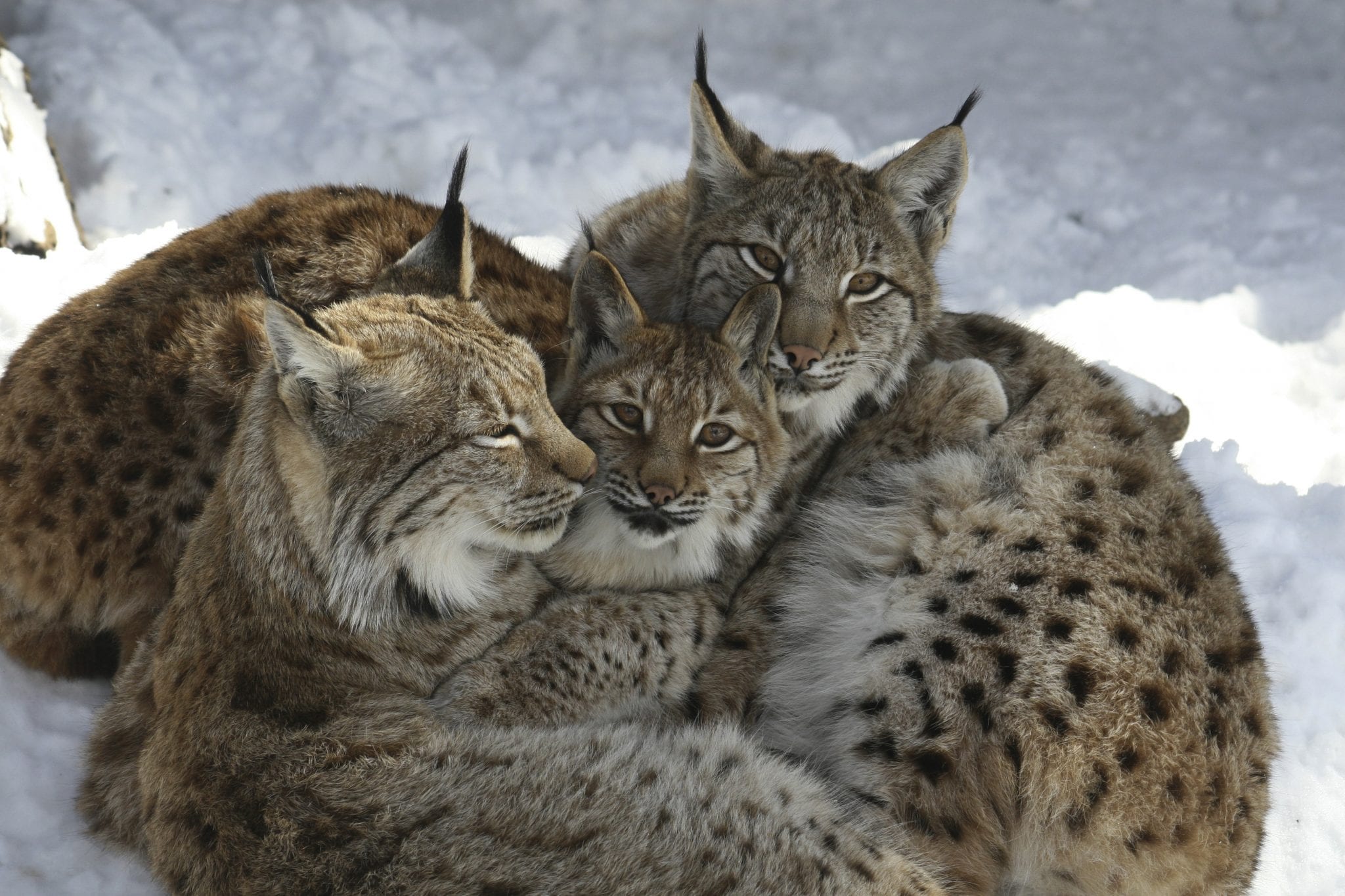 The Alpine Zoo is the highest zoo in Europe and included on your Ski Plus City pass. The zoo is dedicated to species conservation and features chamois, marmots, bears, lynx, otters and birds of prey. The Golden Eagle was nearly wiped out in the 19th Century and you can see them up close at the Alpine Zoo. 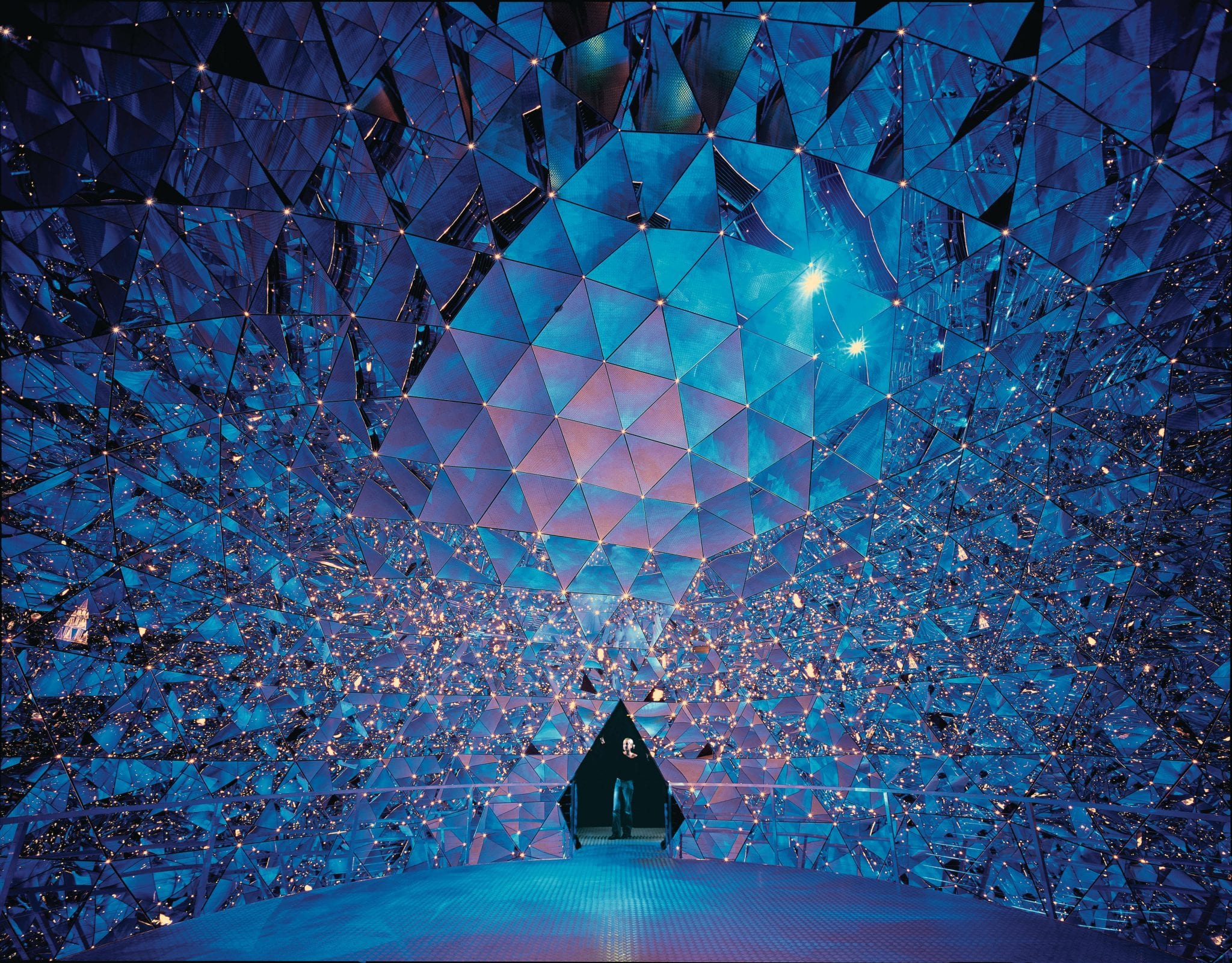 Picture a Crystal Cloud of 800,000 hand mounted floating crystals, add a Mirror Pool, feature garden and you have Swarovski Crystal Worlds, just east of Innsbruck (yes, it’s included on your pass). There’s even a play tower for children so you can peruse and shop while they’re entertained and, yes, it’s all on the pass. 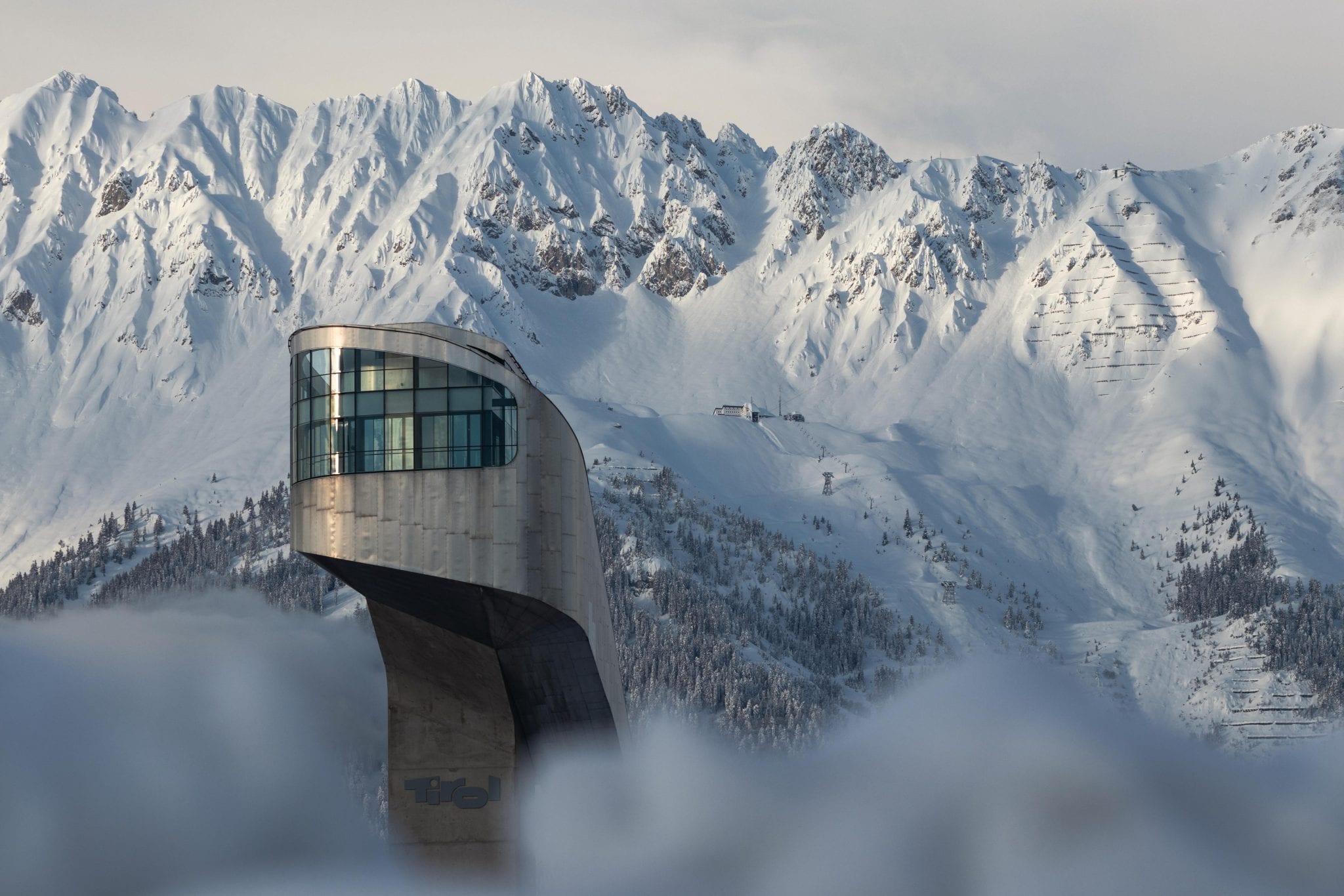 This construction masterpiece in its current form was designed by female Iraqi architect, Zaha Hadid, the same name behind the Tomigaya Building in Tokyo and Reina Sofia Museum in Madrid. The Bergisel Stadium combines a jump tower, cafe and in-run to form a skyline sculpture above the Olympic city of Innsbruck.

The centre is also a FIS World Cup ski jump facility with space for 28,000 spectators. The entire facility, including the funicular, the tower lift, the panoramic café and the viewing terrace on the jump tower, is open to the public daily year round and is included on the Ski Plus City pass. 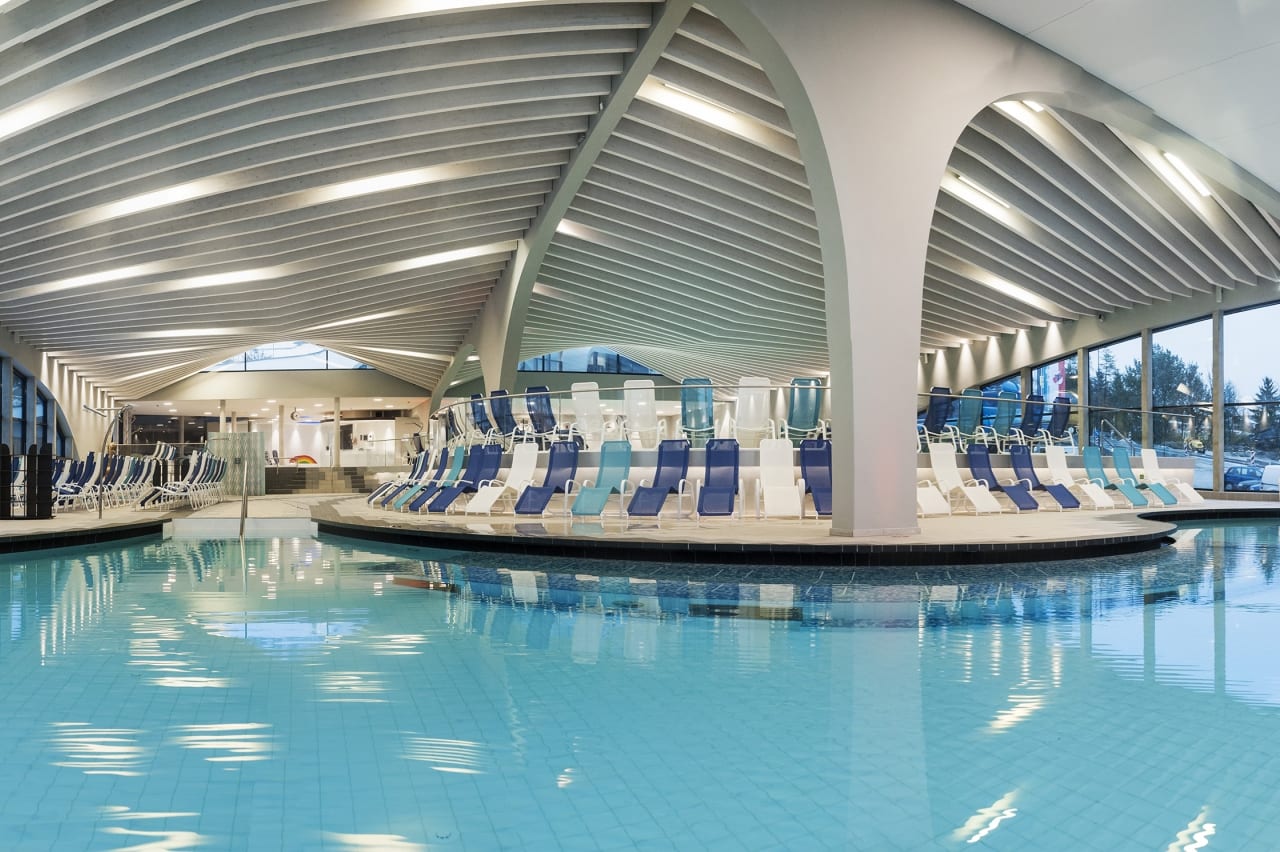 Soak in the waters of Innsbruck’s three indoor pool and sauna destinations – the Neustift Leisure Centre, Stubay sauna and bathing paradise and Axams indoor pool. The perfect respite for your ski weary legs from time spent on the mega slopes of Innsbruck’s ski resorts. Entry is included on your Ski Plus City pass.

There is something so special about a white Christmas, surrounded by snow laden peaks and colourful lights. Innsbruck’s seven Christmas markets are world famous and nestled between medieval buildings. Sip on mugs of mulled wine and dine on Christmas pastries as you peruse 70 market stalls for decorations that will become family heirlooms.

The ski bus takes Ski Plus City pass holders on multiple routes from Innsbruck to the Ski plus City resorts. It is a quick and easy way to get to the slopes and back to your hotel in the afternoon. Plus you can treat yourself to a drink or two during après-ski before heading back down into town.

A two day Ski Plus City pass will set you back €111 (AUD$182) and a five day pass €230 (AUD$379).  This includes 13 ski areas, 22 lifestyle, cultural and sightseeing attractions, admission to three indoor swimming pools as well as the hop-on, hop-off Sightseer Innsbruck bus and all ski bus routes. The SKI plus CITY Pass offers a 25% discount on night skiing.