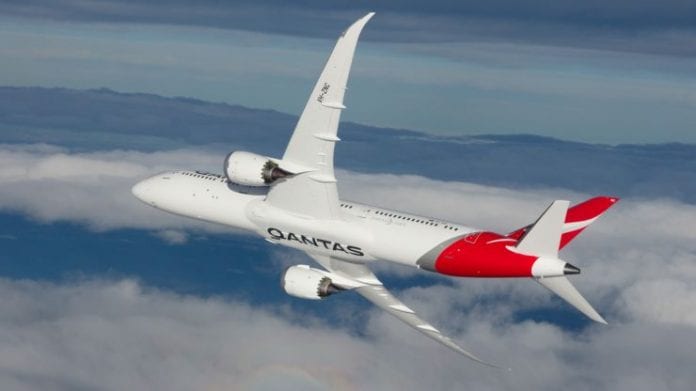 It’s a big day for aviation today with Qantas’ first Project Sunrise research flight set to take off from New York to Sydney this evening.

The aim? To discover if flying almost 20 hours non stop can be bearable for passengers and crew.

The Qantas Flight 7879, with 50 passengers and crew on board, will depart New York’s John F Kennedy Airport at 9pm New York.

The purpose of the record-breaking flight is to conduct scientific research on passengers and crew on an ultra-long haul flight, with the aim of increasing health and wellness, minimising jetlag and identifying optimum crew rest and work periods.

Six of the 50 passengers will act as jet lag guinea pigs with recipes, lighting, temperatures and exercises to combat jet lag all utilised to try to reduce flying fatigue.

Inflight meal service will be delayed by six hours to try to get passengers onto Sydney time. Cuisine designed to temper alertness, nutmeg pannacottas, hot chocolates, will then be served before sleep.

When passengers are on Sydney’s day light time then food will have more spice and kick.

Attention and focus during key time zones on the flight will be measured by their prowess and ability on the “Whack a Mole” game app. Light colours and temperatures will also play a large role in alertness and sleep.

It is all part of Qantas’ ongoing quest to launch commercial flights between the east coast of Australia (Sydney, Melbourne and Brisbane) and New York and London. The direct flights would save passengers up to four hours in total travel time and follow the successful Perth-London route, which started in March 2018 and is the only direct link between Australia and Europe.

While not designed for the 16,200 kilometre (10,200 mile) journey from New York to Sydney, the 787-9 being used for today’s research flight will take off with maximum fuel and a restricted passenger and baggage load (and no cargo) to allow the aircraft to operate the flight non-stop.

The flight will take around 19 and a half hours with four pilots on rotation. Two additional pilots will be in the cabin, having flown the aircraft to New York. Total flight hour experience on the aircraft is 67,000.

The aircraft will operate with a maximum fuel load of approx. 101,000kg. Projected fuel remaining upon landing is approximately 6,000kg which translates to about 90 minutes of flight time.

All carbon emissions from this flight, and two additional research flights from New York and London to Sydney in November and December, will be offset.

The flight will travel at 85% the speed of sound which is around 930 kilometres an hour.

Airbus and Boeing have pitched aircraft (the A350 and 777X respectively) with the range to operate Project Sunrise flights on a commercial basis.

These pitches, together with findings from the research flights and other streams of work, will form part of a business case being developed by Qantas to inform a final yes/no decision on Project Sunrise expected by the end of this year. If approved, flights would start in 2022/23.

Findings on crew wellbeing will be shared with the Australian Civil Aviation Safety Authority to help inform regulatory requirements associated with ultra-long-haul flights over 20 hours.

You can follow Qantas 7879 New York to Sydney non-stop including a live update from the cockpit on Flightradar24.