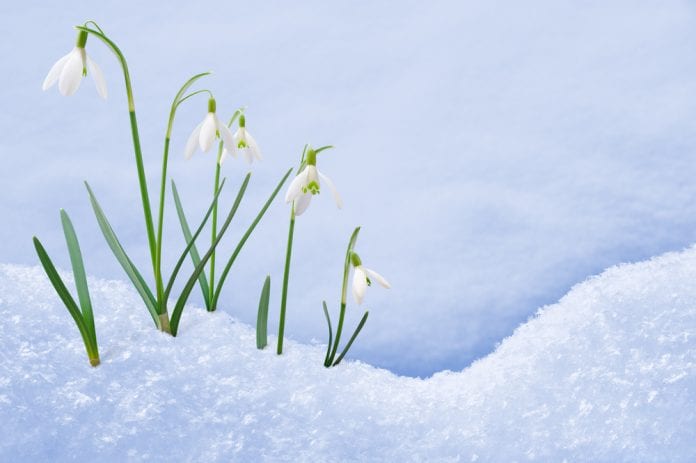 Share with your crew
17FacebookTwitterLinkedInEmailPinterest
17
SHARES
The first week of Spring is days away and there is good news for snow on higher slopes in Australia to welcome the new season in. But it’s touch and go as the front isn’t the coldest in the season. Our resident meteorologist, Alex Zadnik, reveals the snow forecast week ahead.

There’s been some extremely cold mornings through the Victorian and NSW resorts this week, with temperatures near -10C at Hotham during the early hours of Tuesday and Wednesday. The -9.8C minimum at Hotham on Wednesday morning was the second coldest temperature recorded there since the early 1990’s. Perisher Valley dipped to -14.2C on Wednesday morning, which is the coldest morning there in at least 8 years.
A high pressure system brought light winds and clear skies to southeastern Australia through the first half of this week, setting up the conditions for the cold nights. Low humidity levels also contributed to the frosty nights.
On the flip side, days have been sunny and perfect for the groomers. The freeze and melt cycle means that off piste conditions are generally challenging, particularly for the lower slopes and north facing aspects.
On Thursday, an increase in wind and cloud is expected through the day, particularly in Victoria, with the approach of a cold front from the west. Temperatures will also climb above zero through the day, creating soft spring-like snow conditions into the afternoon.
Friday is a tricky day from a forecasting perspective. The cold front will bring a gradual drop in temperatures through the day as it passes through, but probably not enough for this to be a good snow-bearing system.
Rain is most likely for the lower slopes of all the resorts and snow is probably going to be confined to the higher runs at Hotham, Falls, Perisher and Thredbo.
It’s touch and go for the big snowfalls predicted as the airmass isn’t especially cold. The highest runs of Hotham, Falls, Thredbo and Perisher (above approximately 1800m) could see over 20 centimetres on Friday but anything below this may get zero.
Fresh to strong winds will ease back a little on Friday once the front passes through, but overall it’s looking like a good indoor rest day.
A second cold front should bring a further drop in temperatures and light snow falls to all the resorts during Saturday, particularly during the afternoon and evening. Winds will be fresh and gusty but it should be a reasonable day to get out on the slopes.
Sunday will probably be the pick of the weekend, with easing winds, clearing skies and some fresh snow to play with. Buller and Baw Baw may remain a little cloudy with a southwesterly airflow but could also pick up the best falls with this second front.
A large high pressure system should bring lighter winds and clear skies to Victoria and NSW on both Monday and Tuesday, creating nice conditions for those in the mountains.
Another big front is looming for mid to late next week, but it’s still a little early to be sure of what this will deliver in terms of snow.
We’ll look at this in more detail in next week’s update.

It’s been a quiet week for snow falls on the South Island, while Ruapehu on the North Island did have some hefty falls of over half a metre with last week’s frontal system. Turoa was closed on Wednesday due to strong winds, while Whakapapa was still open despite challenging weather conditions.
A low pressure system over the Tasman Sea will approach New Zealand during Wednesday, bringing heavy rain to the North Island. Snow should fall on the higher slopes of Turoa and Whakapapa but rain is expected below 1700 metres.
The low should also bring some stronger winds and showers to the South Island during Wednesday and Thursday, with snow falling to lower levels than is expected on the North Island. Around 5-10cm of fresh snow is possible for the Remarkables, Treble Cone, Cardrona and Mt Hutt over this two day period.
Thursday should be a more pleasant day for most of New Zealand’s ski fields, with winds easing in the wake of the low. Friday should be similar with generally lighter winds and mostly clear skies.
Saturday will see an increase in winds and temperatures across New Zealand with the approach of a strong cold front from the west. It might be best to get out on the slopes early in case some lifts go on wind hold into the afternoon. There may also be some rain late in the day as the front draws closer.
The good news is that this next front looks like bringing very cold air and snow falls to both the North and South Islands during Sunday and Monday.
10-20 centimetres is likely for most New Zealand ski fields across this two day period.
The South Island will probably be the first to see an easing of winds in the wake of the front, so both Monday and Tuesday look very good for the ski fields around Wanaka and Queenstown.
Stronger winds may persist for the North Island into the start of next week, so skiers and boarders planning a trip to Ruapehu should keep an eye on the forecast and resort conditions closer to the day.
Share with your crew
17FacebookTwitterLinkedInEmailPinterest
17
SHARES