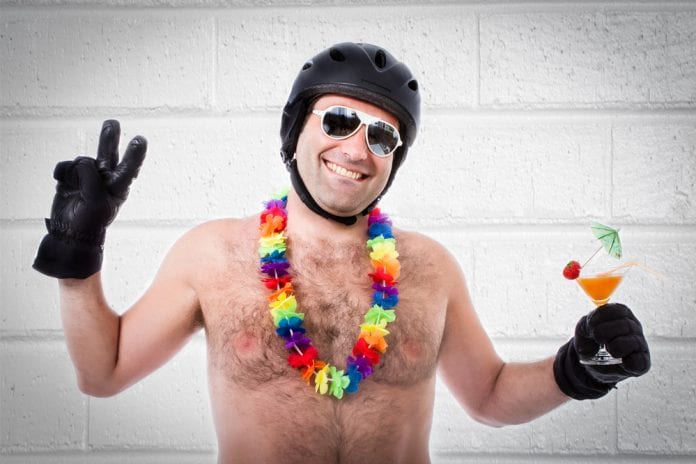 I am wearing a pair of pants this season that on anyone else would spell style and technical chic but on me just spell Jerry. The problem is the knee pads.

These sleek pants in a must-have-now-shade of granite grey blue are too long for my stumpy legs and those cool textured knee pads are more like ankle pads, sagging like an old man’s nether regions. The trouble is the waist line, mine not the pants. You have to sacrifice length for girth or vice versa and well, you get the deal. It’s hard enough shopping for a turn, let alone ski pants.

It was a cold day in Fernie when my Jerry moment happened. So cold that I had traded in my technical ski jacket that screamed mountain pro for an arctic street jacket that shouted Michelin man in New York. At minus twenty five degrees celcius far-shun goes out the window in favour of function.

So here I am pants too long, street jacket that spells rookie, hair roots greying in the wind in need of a dye, and separated from my group on first tracks at Fernie in Canada. Trouble is I’m on an invite only First Tracks run exclusively for the snow improvement camps that run here each week. The same camp I’m currently on.

Lost from my group and perfectly happy skiing solo on untracked corduroy, I stop at other groups and ask for directions down to the chairlift from which I first came where I know my group will eventually end. Bad move.

Clearly taken by my fetching appearance the instructor approached me as you would a wounded deer, speaking calmly and clearly, luring me in before grabbing his radio and calling in the rogue skier caught in his lair.

Taking one look at my attire and fearful I was out of my ski league on a blue groomed run, he insisted I ride the chair with him and once he had me secured under the bar, called me in on the radio, again.

When I got off the chair at the top where I was told to wait, quietly, not move, stay put until the radioed help arrived, a young girl from the group that I had gate crashed approached me.

“Are you ok?” she asked mouthing her words deliberately in my face lest I, you know, have hearing issues.

Who can blame her, really. I looked like a total Jerry. Assumptions had clearly been made about my skiing ability, experience and age and none of them were flattering, or accurate.

It’s not the first time my Jerry ways have outed me.

There was that time at Treble Cone when I spotted a friend’s ski racing daughter over from the USA to train at the resort. Calling out, I skied across to say hi, crossed my tips, fell, skidded down the slope straight into the legs of her future Olympic racing friend who was, shall we say, less than impressed.

Or when I used to only ski in sun glasses even during snow storms because I hated the bags of fluid I’d get under my eyes from wearing goggles. When I got professional shots of myself with my hair out, no beanie, no helmet, but wearing goggles over my locks or that time I insisted I be photographed with my ski jacket undone because I liked the colours of the base layers I had on underneath. What the actual?

That time I had to google Shane McConkey before skiing with him, because, you know, clueless, or that other time I name dropped Shane McConkey in a Jerry article just so you know I skied with him.

Truth is we’re all Jerries at heart, or at least we start as one. How do you know not to leave a gaper gap unless you know what a gaper gap is?

I say celebrate the Jerry within for that Jerry reminds us all that it’s our flaws that make us funny or interesting or human or in need of a hyper vigilant ski instructor with a radio and a secure chairlift bar.

You do you and I’ll do Jerry, clearly.