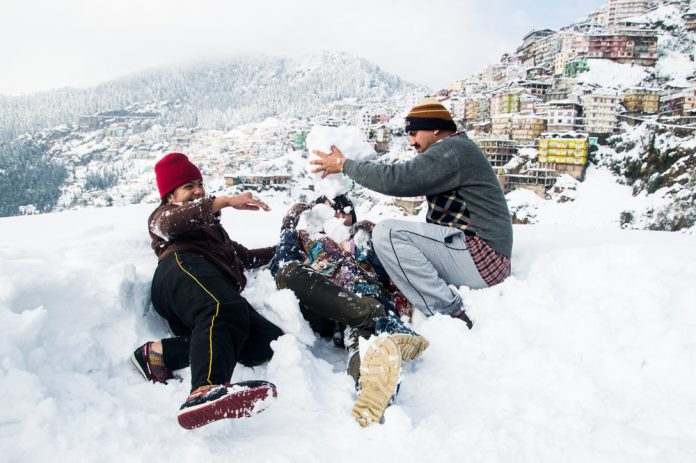 Keen to try skiing in India, I thought Manali could be a little less overrun by overseas visitors than Gulmarg so after reaching out to a few local operators I locked in a week of backcountry skiing in the Himachal region.

I’d be lying if I said I wasn’t terrified I would arrive in Manali to discover it was all a scam and the man I’d been chatting to via email and had transferred money to, not only wasn’t there to meet me when I arrived, but in fact didn’t exist at all.

As a skier you know that Mother Nature is ridiculously unpredictable and you have to suck up whatever snow conditions are served up, and ahead of any ski trip I prepared for the worst-case scenario: terrible snow.

What I stupidly didn’t wrap my head around ahead of my India trip was the almost inevitable risk of Delhi belly.

The dreaded tummy gurgles hit before my Himalayan adventure had even begun as I stumbled off an overnight train from Varanasi to Delhi. A persistent nausea followed me that evening to the barely lit suburban Delhi bus stop on the side of a chaotic highway, where I’d arrived far too early for an overnight bus, which I later found out was two hours delayed.

I tensely waited for four hours, never taking my eyes off my ski bag (aka street dog bed), surrounded by men, some helpfully asking where my chaperone was. When my bus finally arrived, I was in no mood for the attempt to rip me off 300 rupees for stowing my ski bag under the bus.

I nervously crossed my fingers my skis would greet me at the other end. They did, as did my guide, Rinku.

He was a quiet type and I did a lot of the talking, which I imagine sounded like a lot of “blah, blah, blah” to him. He only revealed his true skills in short bursts, saying “I have lived amongst these mountains forever and know them back to front,” or “I’ve ice climbed that peak over there three times during the summers” as he pointed across to a huge mountain range and a peak that was scarily rocky, steep and seemed unclimbable to me.

Eventually we arrived at the small village of Solang Nullah and Hotel Iceland, which would be home for the next four nights.

Day one amongst the Himalayan snow, I woke feeling very ordinary. After frequent sprints to the loo from 3am, I almost gagged on my breakfast. Meanwhile, Rinku was pacing around, energised to climb the nearest slope. Not wanting to let that excited face down, with nothing in the tank I slowly pulled my ski gear on and packed my backpack, and off I trudged in his wake.

We started our first climb, right next to a national high school ski race competition. The ropeway (aka gondola) wasn’t in action yet so the kids had to boot pack up with their retro skis on their shoulders. There were looks of confusion as Rinku and I glided past them on our skis with skins and we were asked for photos of our weird style of upward climbing.

After 200 metres of up I was already a dry mouthed wreck, who had to sit in the shade to have a moment so I called it: it was time to retreat and take cover in the bathroom. 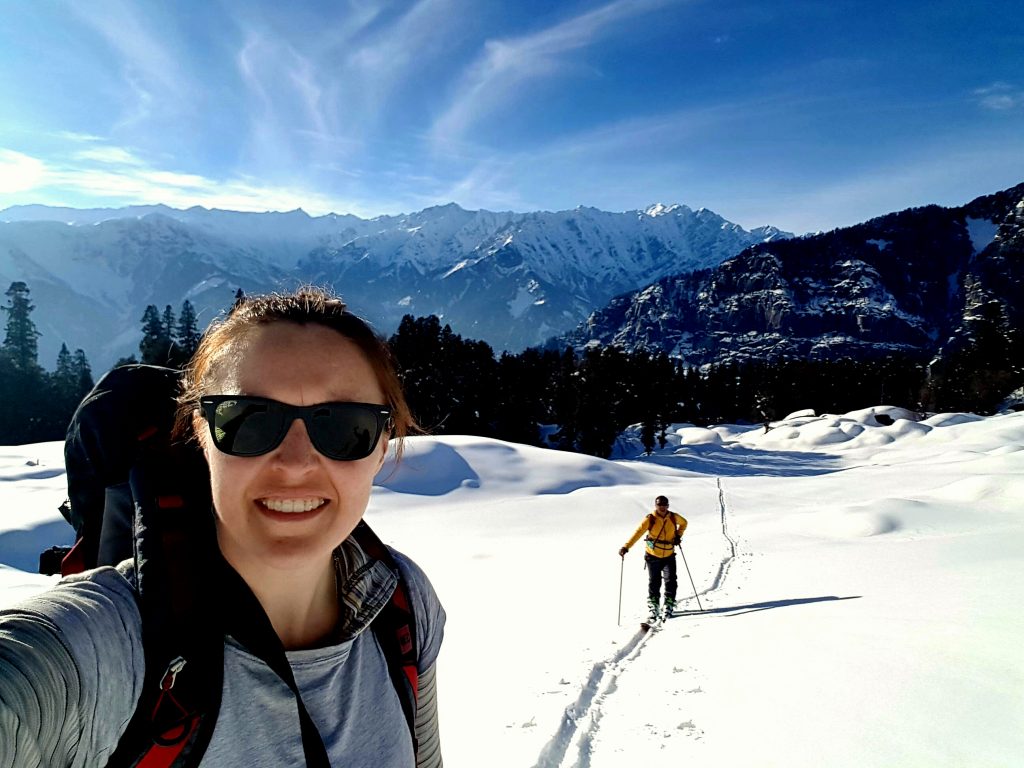 Two days later, finally feeling better, we set off on a hike from the hotel through slippery, icy snow tracks to get to the nearby tiny village from which we could put our skins on our skis to climb across streams, hard melt/freeze ice under trees and some really steep faces.

It had snowed heavily a couple of days before my arrival, but the days had warmed up, so out in the open sections, the snow was deep and soft. The views back along the Solang Valley and to Manali, as we slowly criss-crossed up the mountain, were amazing. Our plan was to get to just above treeline. It was early season and with recent snowfall the avalanche risk was too high beyond that point. As we climbed, I had moments when I thought the tree cover may never end.

We climbed up to a clear ridge above the trees and had 360 degree views, including Pathalsu Peak, which was sitting up above us with a swirling cloud backgrounding it. I was elated to have climbed 1,000 metres vertical from 2,479 metres to an altitude of 3,480 metres.

It was the first of many highlights. Including the tiny village of Setan (reached by chaotic switchback driving on unsealed roads covered in ice). It was a teeny weeny village of one  guest lodge, a few tiny shops and a few huts, that mostly existed for the summer hiking crowd. The family that ran the very basic lodge we were staying in were sitting outside in the warm sun and we joined them after being greeted by two adorable fluffy puppies.

The next morning I poked my head out from under the two blankets I had cocooned myself in, wearing every warm layer I had packed due to a lack of heating in my room. The night before I’d left the curtains open wide, so as I blinked my sleepy eyes open my mind was immediately distracted from the cold by the view of the Himalayan mountain range opposite, which was glowing in the dark against the just lightening sky.

Rinku and I headed out after breakfast and started climbing in a forest near the village up past some little stone huts, with Buddhist flag bunting fluttering in the wind. Rinku seemed in a hurry and set a fast pace. We climbed continuously to 3500 meters with only short breaks to pull off layers.

This was the highest altitude I had ever skinned or skied.

Mesmerised by the surrounding mountains shining in the bright sun, we skied back down near the trees where we had crossed over some nice powder pockets on the way up. We managed to stick with the powder for quite a while before we hit some ice under the trees that we scraped and gritted our teeth through before popping out onto some sun warmed spring snow.

That is life in India, it’s never perfect, it throws up variable challenges daily but the cultural aspect alone is worth it. From the big hearts of the local people to the wide eyed kids in third hand ski gear. I learnt about my physical limits, was surprised by my resilience and I definitely improved my skiing.

I’m a glutton for punishment and pleasure so I will definitely be back.

I visited Manali for a week early in their ski season in January, and due to frequent and heavy recent snowfall was only able to climb to and ski down from tree line due to avalanche danger. I was told by Rinku that to be able to venture further and do multi-day trips it was better to go in March when the weather had settled into Spring ski conditions.

How to get there

A number of private bus companies, as well as the government bus company, run regular services to Manali from different locations in Delhi. These can be booked online in advance, but be sure to do some research on bus stop locations as Delhi is a huge city with bad traffic to get around in.

Both bus trips (to and from Manali) I got an overnight 12 hour bus, which worked well to sleep through some of the very windy sections of the drive. Be sure to allow for delays, which as I found out, are very common, and be aware that not all buses have on-board toilets and they may only make two to three stops along the way.

Please help SnowsBest survive  2020 and remain your independent source of snow news with a “Covid contribution“, from as little as $1, so we can continue to deliver the news and content you value in a year when we need each other most. Contribute here.