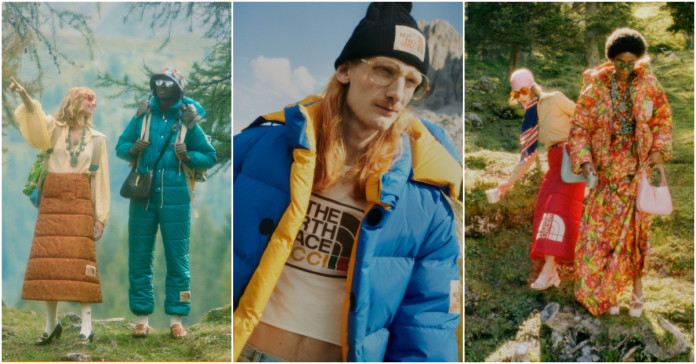 So our most loved adventure friends at The North Face have gone and hooked up with the swanky folks at Gucci. It’s like Bear Grylls spawning with Anna Wintour, sort of.

We asked the funniest person in FARSHUN, the divine Fashion Critical, to critique the 70s inspired sustainable collection EXCLUSIVELY for SnowsBest, in the name of, uh, good fun.

FC: Great news gang! Gucci has done a collab with The North Face, so now you can pay even more for outdoor wear and call it FARSHUN!

Dan Andrews may have put The North Face back on the mainstream map but now I can confirm that it is NOTHING at all unless it’s also stamped with GUCCI, darling.

From the catwalk to the Catskills, this designer adventure garb will set you back a mere AUD$270 for a pair of socks, while the likes of the hiking boots will require a more sizeable investment of AUD$1985.

What?  It’s not like you can travel anywhere?  What else are you planning to spend your money on?

Don’t even get me started on the puffer skirt.  Who knew THAT was a thing!?  Totes gonna rock that this winter.

The collection isn’t called “doona chic” for nothing.*

(* the collection is not called Doona Chic. )

↑ Considering a day hike?  Look no further than this back pack. Starting at around AUD$4550, you’ll find it extra roomy and light weight, given you’ll have no money left to put anything in it.

A nice heavy woollen skirt, inspired by Mrs Doubtfire will also keep those legs warm should the weather take a turn for the chilly.

↑ Somewhere, Nanna is squinting into the sun as her 1970s drapes have been STOLEN from her windows and fashioned into this number.

Both lightweight and floral, pairs well with fluffy Gucci slippers (best known for their rugged outdoorsy capabilities), small bucket hat to keep out  0.02% of that harsh mountain glare and giant sunglasses with only the slightest hint of tint just in case you still wanted your retinas later.

It’s FARSHUN OKAY – nobody said anything about functionality.  (Okay maybe they did but I didn’t really read the press release)

↑ When being my most FARSHUN in the wilderness, I like to be as warm as possible, while still showing a cheeky hint of skin.   Because do you even understand frostbite until you’ve had it on your snail trail?  NO YOU DO NOT.

Ol’ Napoleon Dynamite here has had his hair straightened and is totally rocking this lewk.  Thank GOD, the T shirt is super affordable at only 400 pounds sterling.

Honestly, the combination of the two logos is actually inspirational and I would 100% wear this T shirt ironically with some ripped denim shorts and knee high ugg boots, Paris Hilton style. And look, if you were going to rock a puffer, this one isn’t half bad.

↑ 11 out of 10 hikers would not take directions from any of these people.

↑ Bet you never considered wearing this versatile raincoat dress – but think of the benefits – while you’re feeling a little moist from the inclement weather on your next outdoorsy adventure, your nether regions can maintain a clear flow of ventilation.

I mean it might feel a little humid up there but imagine wearing actual pants on an expedition?

↑ For the love of all that is holy, whaddya call this loves?

When you’re hitting the trails, you know only bright stockings and a lil’ kitten heel will do.

Also very very long pants that will act as a trip hazard, should your unfavourable footwear not provide enough adventure and risk on this particular outing.

↑ Legit would roll around in this jacket – it’s EPIC.  But honestly, what temperature are we creating here?  Bare toes and hands and a jacket designed to get you through an arctic blizzard. *shrugs*

*Once again, I refer to the kitten heel as a sensible choice for your next hike.

↑ Woah – not even hating the print on this puffer.

↑ Legitimately, if I was going to get all Sound of Music and run into them there hills, I would probably wear this.  It really translates from the runway to running away. Simply zip up that floral jacket, tuck your knees in and you have yourself a sleeping bag. Unzip in the morning and you’re ready to forage for a rustic brunch with the girls.

↑ “Look skyward friend, above that peak!  That’s where I left my dignity when I put on this puffer skirt.”

“Ah yes, I see it.  Mine is buried between my socks and sandals” said the man in the puffer onesie, carrying a designer handbag.

↑ I honestly feel like this looks like someone who would have been teased and laughed at in a 1980s high school movie.  Cost of entire outfit though:  $500 Zillion clams.  Who’s laughing now eh?

Love the collab? You’d better be quick! We’ve called dibs on the floral puffer. The pop up The North Face x Gucci is open globally this month and in Sydney and Melbourne until January 24, 2021, then a limited capsule will be available online in Australia.