Home The latest AU/NZ Is this gnarly line a first ski descent in Australia’s backcountry? 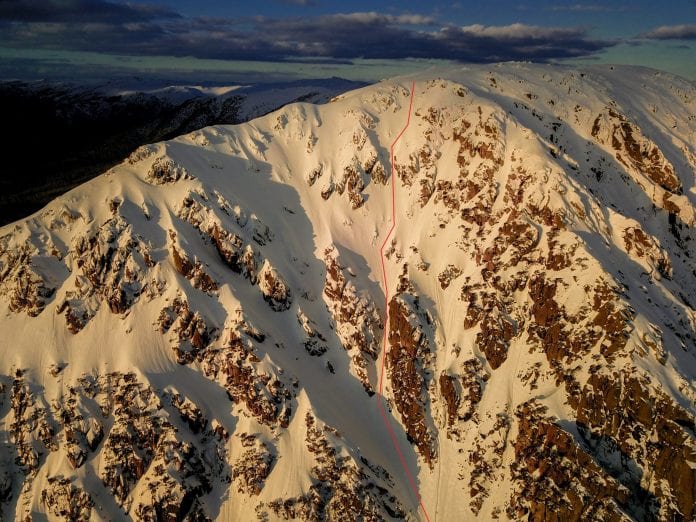 You’d be forgiven for thinking this image, and the line skied by Hugh Newall yesterday, is from the steeps of North America or the wilds of the Swiss Alps. It’s not. This photo (and the line) is in Australia.

Newall, 25, is a freelance photographer and mountaineer originally from Canberra and now based in Jindabyne. He’s experienced enough to travel the world regularly to pursue his mountaineering passion as a sponsored athlete with Sea to Summit Distribution.

“I just got back from a mountaineering expedition to Peru, and building skills for a Mt Cook attempt this summer, with a big mission in Antarctica as the long haul goal” said Newall when we spoke to him this week, after his expedition out to Australia’s Watson Crags in Kosciuszko National Park where this image was taken.

While the Crags have been skied by many an adventurous (and extreme) backcountry skier and boarder, this line has apparently not. Certainly plenty of skiers explored the area in the 70s and 80s but nothing is documented to prove this line itself. Newall believes he may, just may, be the first to have bagged it, or so we hope, because damn that would be cool.

“My belief so far is due to a few reasons: I had asked around the clan of the current guys most active out on the western faces and nobody had been near it, or knew of anyone who had skied it. The only one being Jake Sims, who said that area had been skied in the 80s, but Jake then confirmed that the published book only showed another adjacent line” explains Newall who would love to hear other’s experiences of that region.

“Due to it being on the SW facing Watsons, there isn’t much enthusiasm for that whole face because there’s barely an hour of sun on it during winter. In spring it has sun, but i feel confident that the chute wouldn’t have skiable snow in spring. I’m probably the only one mad enough right now to try it in its current conditions anyway.”

Conditions that were described this week by regular backcountry snow hound, Jake Sims on his Instagram, as a mix of spring corn, boilerplate ice and tons of sluff.

It’s some of the most isolated and steepest terrain Australia has.

Newall hasn’t seen anything documented online, nor mention of this line being skied, though he knows that doesn’t mean it hasn’t been. Talk is that it may (or may not) just be the wider lines around it that have definitely been “had”.

“The photo’s angle makes it look like the premier line, it is quite hidden – from above, the sides and totally obscured from approach” says Newall.

“The ski was 50/50 split between corn and sheet ice, had a sluff chute straight down the middle of the second chute, which increased the danger of a slip beyond my risk threshold, but I was already committed in a no retreat zone.

It was dangerous to turn, because the sluff chute was about 10cm deep and 30cm wide and right in the middle, with ice on one side and corn on the other. Sluff almost swept me a couple times.”

Even more surprising is that Newall and his backcountry ski tour buddy, fellow photographer Adam Flower, had not planned for either of them to ski that line on that day.

“We camped overnight East of Mt Twynam. I didn’t plan on skiing it. We had already skied two lines that day” says Newall. “But we went over to scope out potential lines and take some sunset photos.”

“I asked Adam [also an experienced backcountry skier] if I should give it a go, and he fully supported it. I skied right on sunset around 5.30, it was dark soon after i got my crampons on. I climbed out by headtorch with axes and crampons on boilerplate ice up another chute and we got back to the tent at 9.20pm.”

What makes this feat even more amazing is that Newall suffers from narcolepsy.

“If I’m not out doing things, I’m mega tired” says Newall. Adventuring keeps him on top of the condition that he sustained after an alpine racing crash in Canada resulted in head trauma.

A high percentage of narcolepsy sufferers in their twenties and thirties are at high risk of chronic depression because the symptoms lead them to feel a lack of meaning and purpose to their lives. The best treatment costs $1600 a month and is not subsidised in Australia.

“The plan is to prove that just because of the difficulties of an individual’s circumstances, it is no cause to give up” says Newall of his mountaineering.

“My analogy is that we all have unique journeys and unique burdens. We can think of those burdens like backpacks, my pack may be a little heavier, but it is no cause to give up on my journey.”

The tradition with first descents is you ski it first you name it. If it turns out this specific line has not been bagged before then Newall says he’d name it “The Safety Line.”

Either way it’s a cool story with some cool photos to show his grand kids. That one time I skied this first descent, or did I?

Hmmm, I can feel a documentary coming on.

Do you think you have already skied this line? Know someone who says they did now or back in the day and has the pics or trip report? We’d love to hear from you.