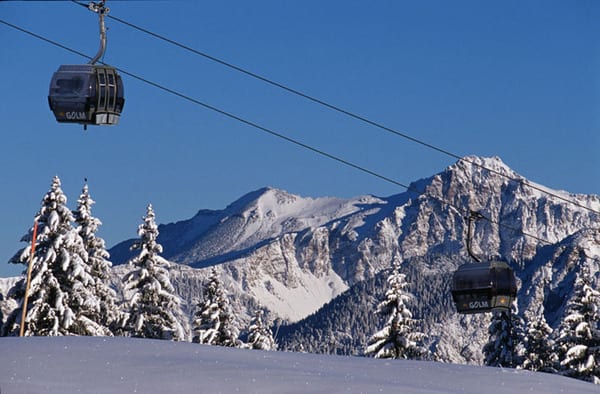 How do you pack more value into a ski pass which already includes world-class destinations like Vail, Beaver Creek, Breckenridge, Park City and Heavenly? Make it the only multi-resort pass to offer significant access to European skiing and snowboarding.

Today Vail Resorts announced it will add Les 3 Vallees, Paradiski and Tignes-Val d’Isere in France, Skirama Dolomiti Adamello Brenta in Italy, 4 Vallees in Switzerland, and Arlberg in Austria to the 2016-2017 lineup of the Epic Pass.

WHAT DO YOU GET

Now they also have this. 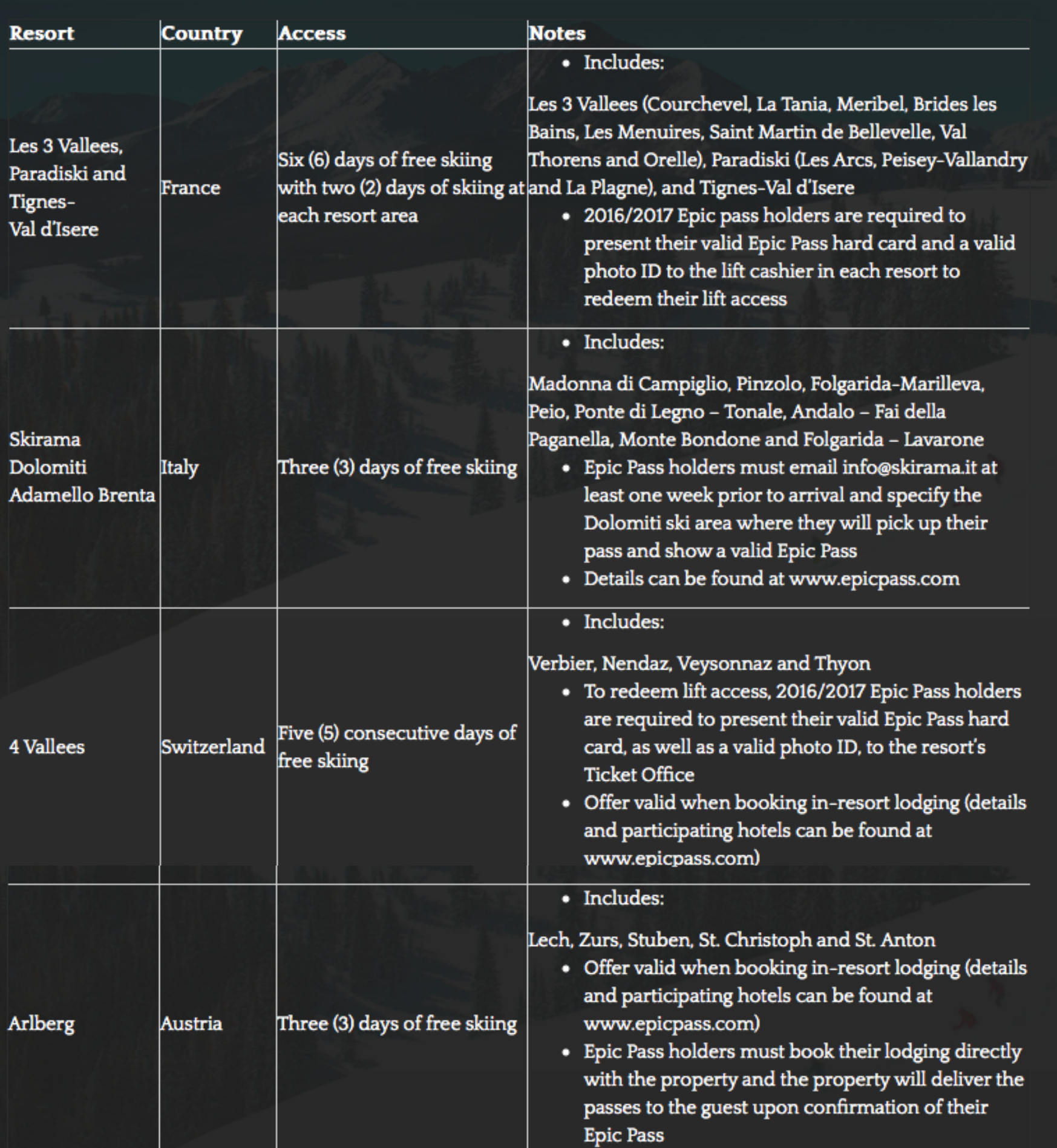 France’s largest ski areas, Les 3 Vallees, Paradiski and Tignes-Val d’Isere, offer a unique playground to skiers and snowboarders from all over the world, accessing five glaciers, 391 ski lifts and over 800 miles of marked runs for all ability levels within a 30-mile radius. The three areas combine high-altitude skiing guaranteeing quality snow from November to May with stunning views of Mont Blanc and a 360-degree panorama of the French, Swiss and Italian Alps. 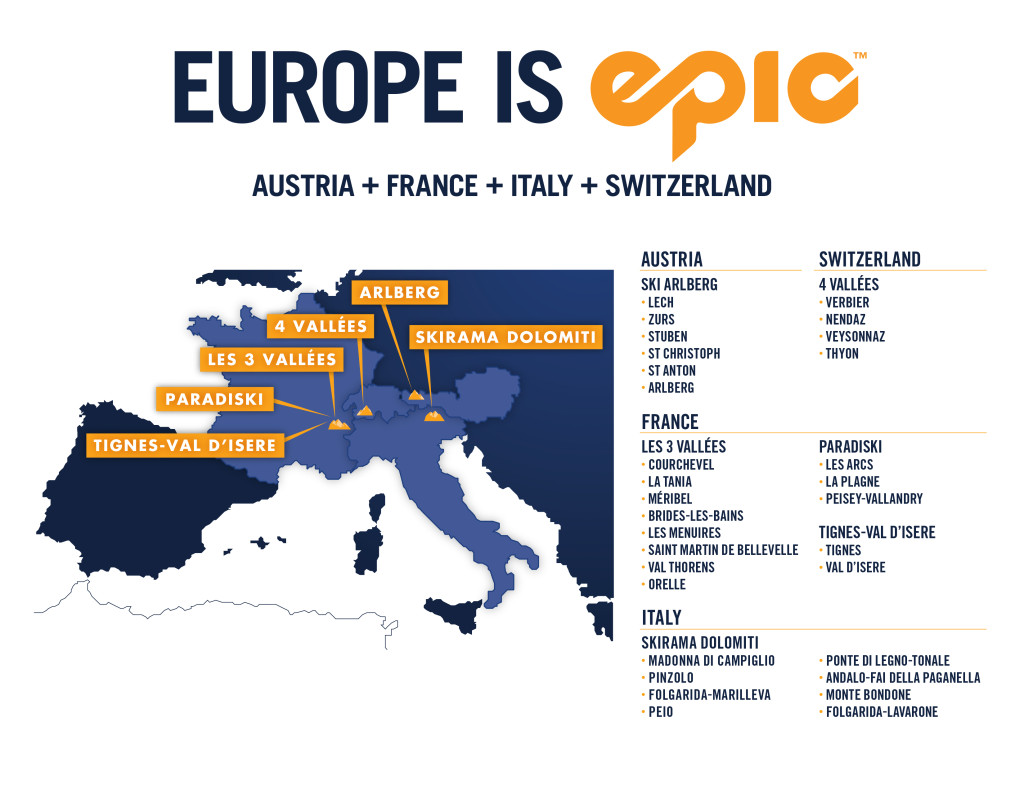 “This partnership with Vail Resorts gives skiers and snowboarders access to some of the most iconic winter destinations the world has to offer,” said Vincent Lalanne, General Manager of Association Les 3 Vallees. “We couldn’t be more excited to provide this type of value to our dedicated guests who want to experience the best skiing in Europe and the U.S.”

South of the Alps, nestled amongst some of the most beautiful mountain peaks in the world such as the Brenta Dolomites and Adamello (11,666 feet), is some of the best skiing in Italy. Skirama Dolomiti Adamello Brenta is home to 150 lifts and 236 miles of ski slopes that make up acclaimed resorts such as Madonna di Campiglio and Pinzolo in Val Rendena; Folgarida-Marilleva, Peio and Tonale in Val di Sole; Ponte di Legno, Andalo-Fai della Paganella, Monte Bondone and Folgaria-Lavarone. The winter offering is enriched by the high-quality cuisine and the exclusive “Italian style.”

Verbier, part of the 4 Vallees ski area, is the largest resort in the Swiss Alps, is acknowledged as one of the premier “off piste” resorts in the world, and is home to a number of professional freeride competitions. Above and beyond this reputation, Verbier is well-known internationally for its electrifying, cosmopolitan nightlife, and the resort is proud of its legendary apres-ski and its lively clubs. While skiers and snowboarders from all over the world rave about this off-piste paradise and fun evenings, families also appreciate the resort’s social atmosphere and family-friendly offerings.

For decades, the mountain range between Tyrol and Vorarlberg, which is home to Arlberg, has been a highly sought-after metropolis for international ski and snowboard enthusiasts. Arlberg is widely considered the cradle of modern skiing and in December 2016, thanks to the opening of four new cable cars, it will be Austria’s largest linked ski area. Also the birthplace of champions, athletes from Ski Club Arlberg have garnered an incredible 83 medals at various Olympic Games and World Championships.