Home The latest Coronavirus The story of an Aussie stuck in a French ski town this... 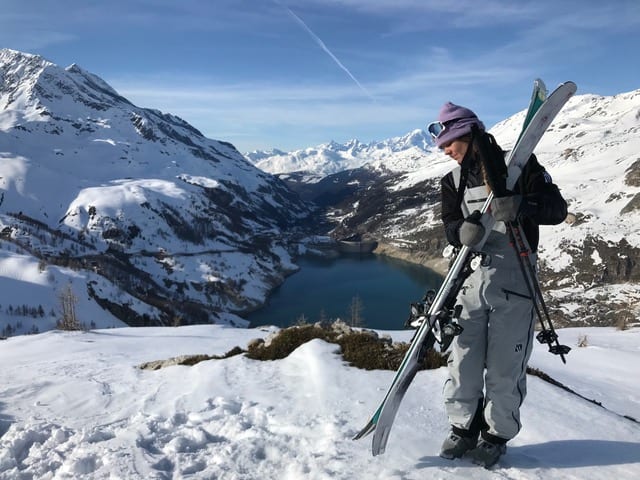 Every northern winter Australian private chef, Hannah Tooke, works in the French ski resort of Val d’Isere. This would have been her sixth season, if the lifts were turning. Instead the Melbournian is, along with the rest of France’s ski resorts, spending the winter in lockdown.

Hannah met a Frenchman in her first season abroad, six years ago, and has been with him ever since. It is love that has kept her in France and Covid that makes it difficult to leave.

Having survived the last minute (six hours) Covid closures of the 2019/2020 ski season, and then a summer in the south of France, devoid of the private chef work she would normally be slammed, Hannah returned to Val D’Isere in the hope the lifts would turn this season.

So far, they haven’t.

This is Hannah’s story.

WE ARE NOW into February and the chairlifts will not be opening this month, and are ‘highly unlikely’ to open at all this winter.

Because of Covid there are so few jobs in France at the moment. Almost all of my friends are unemployed or on ‘chomage’ from their employers. The tourism and hospitality sectors have been completely decimated by all of the restrictions and the loom of a third potential lockdown.

What makes us all anxious is not knowing when things will open up again, and when we’ll be able to work again. None of us would have thought that this would be lasting for a year, with still no real end in sight.

Skiing is often viewed as a superfluous activity for rich kids, so I doubt there’ll be much sympathy here, but so many of us have built our lives and livelihoods around the mountains. We’ve developed specific skills and undertaken training to be able to work here.

I had a chunk of money that I had saved during the last few years. The intention was to use to it get married here, or to apply for my partner’s spouse visa for Australia, to start a business, or to train as a yoga instructor. But instead that money has paid for food and living expenses this year while work has been so limited.

It feels like a waste, but I guess that’s why they call it ‘saving for a rainy day’. This has just been a rainy old year. The chalet company I work for each winter is usually frequented by guests from the UK and runs a traditionally British holiday with hosting and cleaning by chalet girls, cooked breakfasts, afternoon tea cakes and wonderful four-course dinners. But with the UK border being closed, and the EU disallowing visitors from outside EU countries, there are no guests to fill our chalets.

I am in the process of applying for a ‘carte de sejour’ or residency (which has just been granted) which you become eligible for after living in France for more than five years. My five years was last November, so I couldn’t leave before then without having ‘wasted’ my time here.

Normally I return home to Aus for a month each October but this last year, obviously, I couldn’t. Even if I wanted to go home, so many of the flights cost more that $15,000, more than I have in my bank account, and there is a quota on how many citizens per day. It’s a whole nightmare, that I’m rather glad I don’t have to contend with.

It makes me laugh how easily I used to jump on planes all over the world, without ever worrying about it. I think because of this, I never really got home sick. Ever.  I mean I missed my family and friends, and I often craved food from my favourite restaurants, but I never longed for home in that way because there was always another adventure to be had where I was.

Before Covid, home was only a flight away and if necessary I could be there within 24 hours, because it was always possible. It’s a very strange and surreal feeling when your country closes its border.

These ‘unprecedented times’ have brought up some unprecedented emotions and homesickness. It’s hard to describe this feeling; a deep urge to be in your country, in your place, with sand between your toes and sun burnt skin. To inhale the smells that were imprinted on your from childhood, to speak without altering your choice of words or speed.

Covid in the alps

I guess I feel safe, though more because of circumstance than protocols. I’m young, reasonably fit, healthy, I cook from scratch and eat well, I don’t tend to get sick, though these may not be safe guards I know. Most of us were exposed to Covid when it was rampant in Europe last March, and I didn’t get sick then. With so many people from all over the world here every winter, it traveled to and through ski resorts quickly. Most people I know here have had it at some stage.

Masks are mandatory every where you go, even in the street. There are €130 fines for not wearing one, but it doesn’t seem to be enforced strictly, like it would be back home. There is a 6pm-6am curfew across the whole of France, which is quite surreal for a country that loves its music and it’s nightlife, especially in the ski resorts. There are rapid antigen tests for Covid available in most pharmacies in France for free, which can be reassuring.

Thankfully, as of a month ago, I’m now covered by the French healthcare system. This covers me for almost all medical bills, so I’d be covered if I got Covid, plus I have additional extreme sport insurance that covers me for skiing accidents anywhere in the world – something tells me this is more likely to get used than for Covid, knowing my track record of broken limbs and dislocated joints on the mountain.

But what of the snow?

Because Val is famous for its off piste skiing, on a normal season the terrain gets tracked out quite quickly. But this year you can tour all day and not see another group. We often hike up the same track multiple times per day and simply drop in a few meters to the side of our original tracks to get fresh lines. So many of us ‘seasonnaires’ are saying that in terms of riding, this is one of our best winters ever.

This has been a very snowy season so far, with more snow fall days than blue sky days. January here is usually very cold, often plunging to -20 at night so the storms during those cold days normally have incredible quality snow. It really is like magic when it falls. We had nearly a week where feather sized fluffy flakes kept coming down without stoping. The whole village is transformed when that happens. All of the chalets start to look like gingerbread houses with their white icing on top.

In terms of skiing we’ve had so many powder days already, with plenty more to come according to the long range forecast. While the snow here isn’t normally as light weight as in Japan, it doesn’t tend to transform as quickly as the Japow. The much colder temperatures generally mean that even days after the last snowfall you can still find untouched powder lines to ski.

Val d’Isère’s chairlifts aren’t running due to Covid, though the resort is open for secured on piste ski touring on one sector, plus cross country skiing, snow shoeing and walking on some other tracks. So it’s pretty much been all back country for us – even when we’re skiing on the pistes. Those unsecured pistes are classified as back country this season, and you have to take your transceivers, shovels, probes and abs bags to ride them.

I can’t rave enough about the terrain here too. These are REAL mountains.

When you get snow of that quality, on these faces it really is mind blowing. Even the most advanced skier here can still find things to try that scare the shit out of them. A favourite of mine is called ‘Pisteur’s Couloir’ (Ski patroller’s corridor in English).

It’s a steep 45 degree couloir that’s only around three metres wide. I’ve skied it lots of times, though normally after only a 25 minute hike from the top of the nearest chairlift. It’s on my list to do in the next week, but we’ll see if I’ve still got the legs to manage it after the 3.5 hour tour up from the village.

Two ski resorts in France have already gone bankrupt this year as there are massive overhead costs involved in running a resort even when there is no tourism. Avalanche blasting from helicopters or the gasex and catex systems built into the mountains, it all still has to be done to keep the village safe.

The snow clearing of the roads is a huge task too, and this year there have already been several huge avalanches across the roads. All of this adds up, though thankfully the French government is now offering support to the lift companies.

Brexit has been another huge challenge for French ski resorts, though it’s been overshadowed by Covid. A huge amount of staff are British, there are so many British run companies, especially chalet companies and ski schools. Where staff used to be allowed to be employed under British contracts but work in France due to the EU policies, that will no longer be allowed.

Anyone wanting to work here now will have to be an EU passport holder or resident which is going to have a huge knock on effect on the establishment that is the traditional British chalet holiday, and perhaps on the clientele who visit.