Home The latest AU/NZ Is this the coolest landing bag in the southern hemisphere? 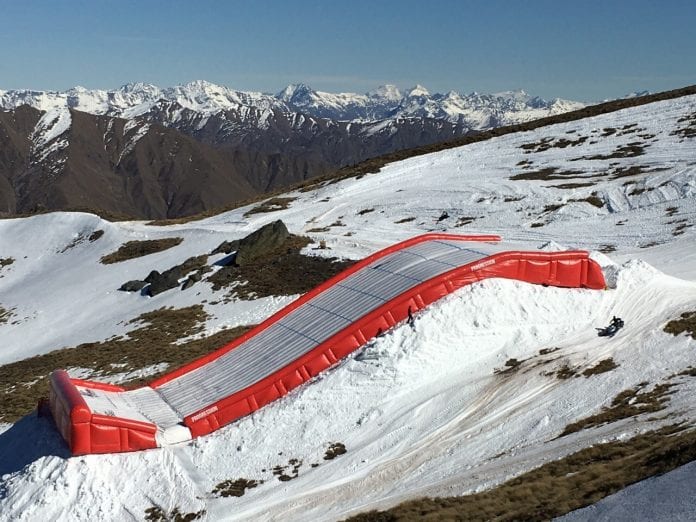 NZ Snow Sports Athletes Focus on Progression with New Landing Bag to be Installed at Cardrona.

New Zealand’s elite skiers and snowboarders will be working hard to ensure they continue the medal-winning success of the 2018 Olympic Winter Games campaign and fulfil their podium potential through to Beijing 2022.

A 70 metre long, 25 metre wide air bag, installed for the entire season at Cardrona Alpine Resort – home to the NZ Park & Pipe team – forms a crucial part of the plan.

Thanks to investment from Sport NZ and a partnership agreement with Cardrona, Snow Sports NZ will be able to provide its park and pipe athletes with world-class on-snow training facilities throughout the entire winter season.

The inflatable landing bag provides a safe learning and practice environment before athletes transfer new tricks to the snow. Freeskiing and snowboarding are progressive sports, with athletes constantly required to upskill and increase their trick repertoires, adding more spins and rotations and – most importantly – landing safely back on snow.

“We love to get behind innovation like this that will help them progress faster and safely. The feature is unreal and we are so looking forward to watching them hit it and throw down the new tricks and get ahead of the competition.

The more successful our athletes are, the more exposure Aotearoa gets. People around the world now consider us a serious ski destination and this has been impacted significantly from these successes.”

The NZ Park and Pipe team is accustomed to training on landing bags; the athletes have used similar facilities in the USA, Canada and Japan. Snow Sports NZ was able to purchase its own bag last year thanks to funding from Sport NZ and it was first used during last October’s Spring Training Camp when the air bag was set up in the Soho Basin, near to Cardrona Alpine Resort.

Snow Sports NZ Performance Director Ashley Light says, “We have seen the impact of the landing bag on the results at the recent Olympics.  With the world-class facility now with a permanent home, the ongoing development of snow sport athletes can continue unabated. Traditionally NZ athletes have chased the progression facilities internationally in Japan and the US.

With the bag in NZ on our home patch the accessibility and much reduced costs will allow even more athletes to develop in the same steps as Zoi and Nico.  We are really excited to see the project and partnership with Cardrona come to fruition.”

This season, the landing bag will be installed – a week-long process involving a core crew of 10 installers – right beside the big air jump at Cardrona.

The proximity to the jump is important as it will allow for an easier transition to snow once athletes have perfected a trick.

As well as high performance athletes, up and coming athletes will be able to train on the air bag. This is significant in terms of creating depth of talent within the sport, with athletes able to work on skill progression at their home resort rather than having to meet the expense of travelling to the northern hemisphere to access facilities.

NZ’s next generation of freeskiers and snowboarders are training on the landing bag alongside the high performance park and pipe team at three training camps this season.

The FIS Junior Freestyle Ski and Snowboard World Championships and Big Air World Cups, included in this year’s Audi quattro Winter Games NZ schedule, will be a focus for NZ’s high performance and national development level athletes this season and the air bag will be an important aspect of their training.

Murase became the first woman to land a double cork 1260 in competition. The highest scoring jump in the women’s snowboard big air at the Olympic Games just three months earlier was a double cork 1080.

“Junior athletes internationally have been benefitting from training on these facilities,” says Willmott. “The landing bag is a crucial tool for New Zealand athletes wanting to fast-track skill progression.”