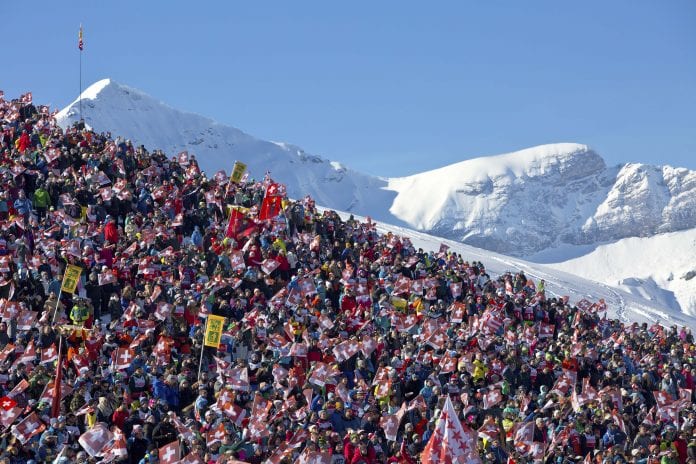 The acrid stench of cigar smoke tangles with the cheesy bouquet of fondue cooking on camp stoves. Terraced seating has been dug into a frozen hillside. Makeshift tables have been fashioned from timber crates. Music blares from Bluetooth speakers. Pretty girls in puffy ski jackets snap pictures with soldiers in camouflage fatigues. One guy is dressed in a cow suit.

All around is a sea of red and white – the colours of the Swiss national flag. It’s visible on fighter jets soaring overhead; it’s on beanies and gloves. It’s draped across the snow, tattooed on cheeks and waving in the air, all because of a downhill ski race.

The place is Wengen and the race is called the Lauberhorn – the oldest, longest and fastest on the men’s World Cup circuit.

The race that stops the Swiss nation

Since 1930, skiers have been testing their mettle on a 4.4km downhill course that descends for more than a vertical kilometre to car-free Wengen, one of the prettiest villages in Switzerland. Downhill racers covet winning it just once in their career, equating it to a tennis grand slam or one of golf’s majors.

It’s where legends are created and careers destroyed.

No other race captures so many aspects of the sport – jumps, turns, straights, obstacles, scenery, history and atmosphere. It takes nearly a minute longer than any other to complete and is considered the most physically and technically taxing race on the circuit, requiring nerve, smarts, endurance and bucket loads of speed.

The Lauberhorn is a big deal here – as big as any sporting event gets in Switzerland. Thirty-five thousand spectators shun the ski slopes for a day to cheer on their heroes, cramming onto 100-year-old rack railway carriages and pumping more than $40 million into the local economy.

Like the Melbourne Cup, it’s the race that stops the nation. More than a million viewers tune in to watch it live on TV each year, making it the most watched program of the year – more, can you believe, than Switzerland’s Got Talent. And, like at the Melbourne Cup, most of those 35,000 spectators get completely trolleyed by the day’s end.

The Hundschopf and the local favourite

I’m watching the race from the Girmschbiel VIP section one-third of the way down the course. Alongside is a hill where members of the public huddle closely to watch. Above us is the most daring and visually spectacular section of the race, the Hundschopf, or Dog’s Head. And towering over us are the Eiger, Mönch and Jungfrau – three of the most terrifying, yet beautiful, peaks in all of Europe.

I’m above the tree line here, my vision of the race only obscured by the number of Swiss flags waving above the heads of the people in front of me. The local favourite is a two-time winner, Beat Feuz, who carries the hopes of the entire nation on his shoulders.

Whenever he or any of his compatriots come flying over the Hundschopf, screeching around Canadian Corner or tearing down the Alpweg, a straight no wider than the length of a racer’s high performance skis, those flags are hoisted above the shoulders. Cowbells ring and horns blare. There’s no mistaking where their patronage lies.

Just beyond our fenced-off area, out in the earthier public domain, the party is in full swing. Booze is the prime upper here, balanced occasionally by the telltale scent of marijuana. They’re downing warm gluhwein to insulate against the cold. They’re tipping vodka down their throats. Champagne corks pop and wine flows like you’ve never seen before.

A guy with a container strapped to his back weaves through the crowd pouring coffee laced with schnapps through a hose.

There are brass bands dressed like Shrek and Aladdin playing drinking melodies and folkloric versions of Status Quo. A turbaned conductor rocks from one foot to the other, moving with the beat of the music. The crowd sways back and forth with him. It’s a stirring sight. And it’s damned good fun.

Six competitors have raced past us to the finish line and Feuz sits in first place. The Swiss are ecstatic. It could signal a big night ahead, down in Wengen. Then an Austrian, Vincent Kriechmayr, whizzes by at 140km/h, shaving fourteen hundredths of a second off Feuz’s time. The Austrian is winning.

“Noooo,” a Swiss girl howls. “Anyone but an Austrian.”

He’ll hold his lead until all 35 skiers have raced. Feuz finishes second.

With the races completed, it’s a long walk down to the after-party in Wengen. For some, it’s a battle to get there. One guy is passed out beside the trail. Others walk arm in arm, holding each other up. Sledders hurtle down, skittling pedestrians in their way. It’s all done in jest and no one is hurt.