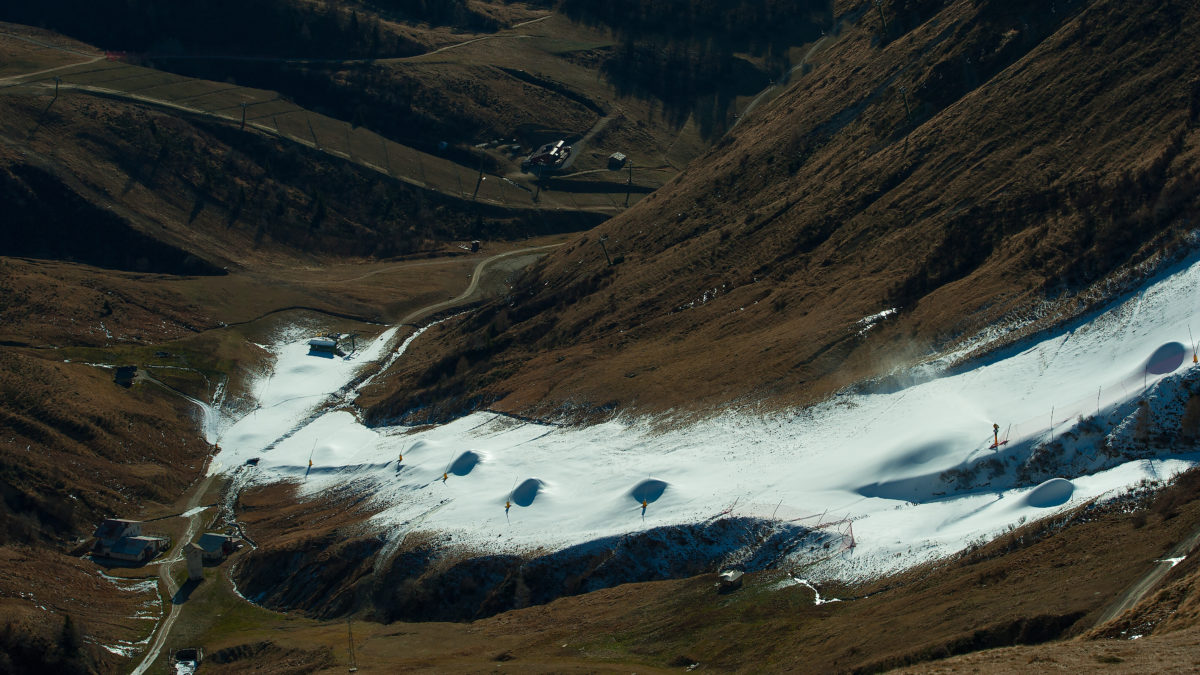 Snow sports, like all sports, are more than the sum of their parts. They give us a chance of surviving a world that can be harrowing by removing us from it and immersing us in nature’s wonderland; another world created by our planet where anything seems possible.

To truly experience this world, we need the thing that gives us the thrill on those steep, deep days; the thing that gets us out of bed on mornings when we look out the window to find the chairlift hidden in a literal cloud. But the way we’re going, ‘the snow’, as we say with affection, may not always have snow.

Climate change is ‘an inconvenient truth’ as Al Gore so delicately put it. But it is a truth.

2015 was the warmest year on record and it’s had consequences. As of 2017, the Horstman Glacier in Whistler has receded by 35 feet since the camp opened in 1989. And the Horstman is just one instance. Since the 1970s, the Northern Hemisphere has lost snowpack equivalent to an area three times the size of Texas.

Global warming is one cause of climate change; it occurs when we burn fossil fuels. The burning produces heat that becomes trapped in the atmosphere and proceeds to act like an increasingly effective oven Mother Nature doesn’t need. The oven increases the Earth’s temperature, which causes snowpack to melt and increasing amounts of winter snowfall to fall as rain. The change in our climate that is a result of global warming means that snowfall becomes more unpredictable and inconsistent the more we heat the oven, to the point that, by 2100 it is estimated that only four of fourteen major resorts will remain profitable.

So, why are snow sports so important in combating the ever more frightening climate crisis? Because the people in the industry can physically see the direct effects of what is happening with our climate, and it affects us on a personal level. We will do anything to fix it.

Snow sports are globally popular and the people within them are uniquely placed to bring real solutions to the forefront of the global consciousness.

Leading the way is Protect Our Winters (POW), led by Jeremy Jones. With icons of the snow sports industry as ambassadors (think Chris Davenport, Jimmy Chin, Ted Ligety and friends), it has the ability to effectively communicate the need for environmentally sustainable practices on the basis of having deep and personal understanding of the issues and effects of climate change.

More importantly, POW carries the social clout to motivate society and mobilise it towards environmentally sustainable practices, by educating youth through school climate assembly programs, advocating the issues and the science to lawmakers, and invoking community based activism.

Like POW, ski resorts and the people within them are in a unique position to communicate the issues of climate change, to provide quantifiable data of its effects, and to set a social example. In 2006 the Australian Ski Areas Association at the time introduced the Keep Winter Cool (KWC) Charter, which aimed to “raise awareness of the relationships between greenhouse gas emissions, climate change and snow conditions” and provided guidelines for resorts to reduce their environmental impact.

Today, eleven years later, all major Australian resorts acknowledge the need to be environmentally aware and aim to manage their operations in a sustainable way. But ensuring sustainability of operations also involves educating the people within the resort about the environmental management plans, and encouraging them to be passionate about helping the resort reach its set quantifiable targets.

Perisher’s annual clean up day combines around 80 members of staff who scour the slopes to find and dispose of approximately 1 tonne of rubbish.  Thredbo has partnered with Greenfleet and, with every lift pass purchase, each guest has the option to buy a tree for $4.00. The purchased tree will then be planted to offset the emission of approximately one tank of fuel on the journey from from Sydney to Thredbo.

Climate change is real, all skiers know it @AspenSnowmass will continue to #ActOnClimateChange. Bad call @POTUS

Like Australian resorts, big players in North America, Vail Resorts and Aspen Snowmass, both have made commitments to reduce their carbon footprint and manage their resorts in an environmentally sustainable way. Their strategies and targets are similar to that of Australian resorts and include utilising solar energy, carpooling, and installing more energy efficient snowmaking systems.

For Aspen Snowmass and Vail Resorts, the main goal is sustainable practices with quantifiable targets, such as Vail Resorts’ ‘Target 10’ and ‘Next 10’ targets. Overseen by the EpicPromise Foundation, they aim to improve the company’s energy efficiency by 10% for each commitment period. 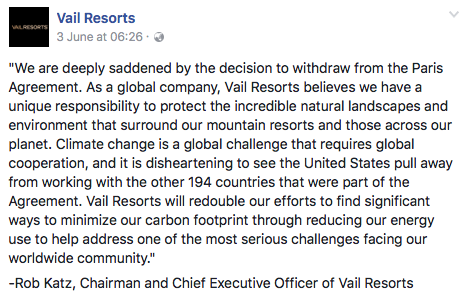 Ultimately, behind the corporate fronts of ski resorts are the humans. The people on the ground who keep the lifts spinning and the smiles flowing are there for no other reason than that they love snow and what they can do on it. They are passionate about being outside in the natural environment; otherwise they wouldn’t be there.

Like us, they’re skiers, snowboarders, hikers, and general outdoorspeople. We all see the slushy, brown, tangible evidence of our changing climate. We all get the same knot in our stomach as we avoid the patches of grass on mid season runs that are becoming ever more present. Snow sports are important because of the people who care so much about protecting what is important to them and, in doing so, who have the potential to make a difference on a global scale.