Get excited, the slopestyle course for the Beijing 2022 Olympic Winter Games has been revealed today and it is epic.

The team at Germany’s famed Schneestern GmbH & Co have created a technical and inspired course. They are the same team behind the PyeongChange slopestyle course in 2018.

“The main challenge we faced was to protect riders from the strong west winds. ‘Where would you like to be in windy conditions?’ I asked myself. Behind the wall, right?

“That’s how Great Wall design came to be a part of the course. Also, the rail features are installed in steps, that go lower and lower towards the right side. We believe this will serve its function and that riders will be able to perform at their best.

“Once the wind issue was solved we put all effort to designing features that allowed for creative lines on the rails, take-offs, and landings, and I hope to see all the lines we imagined – and more – utilised by the riders at Beijing 2022.” 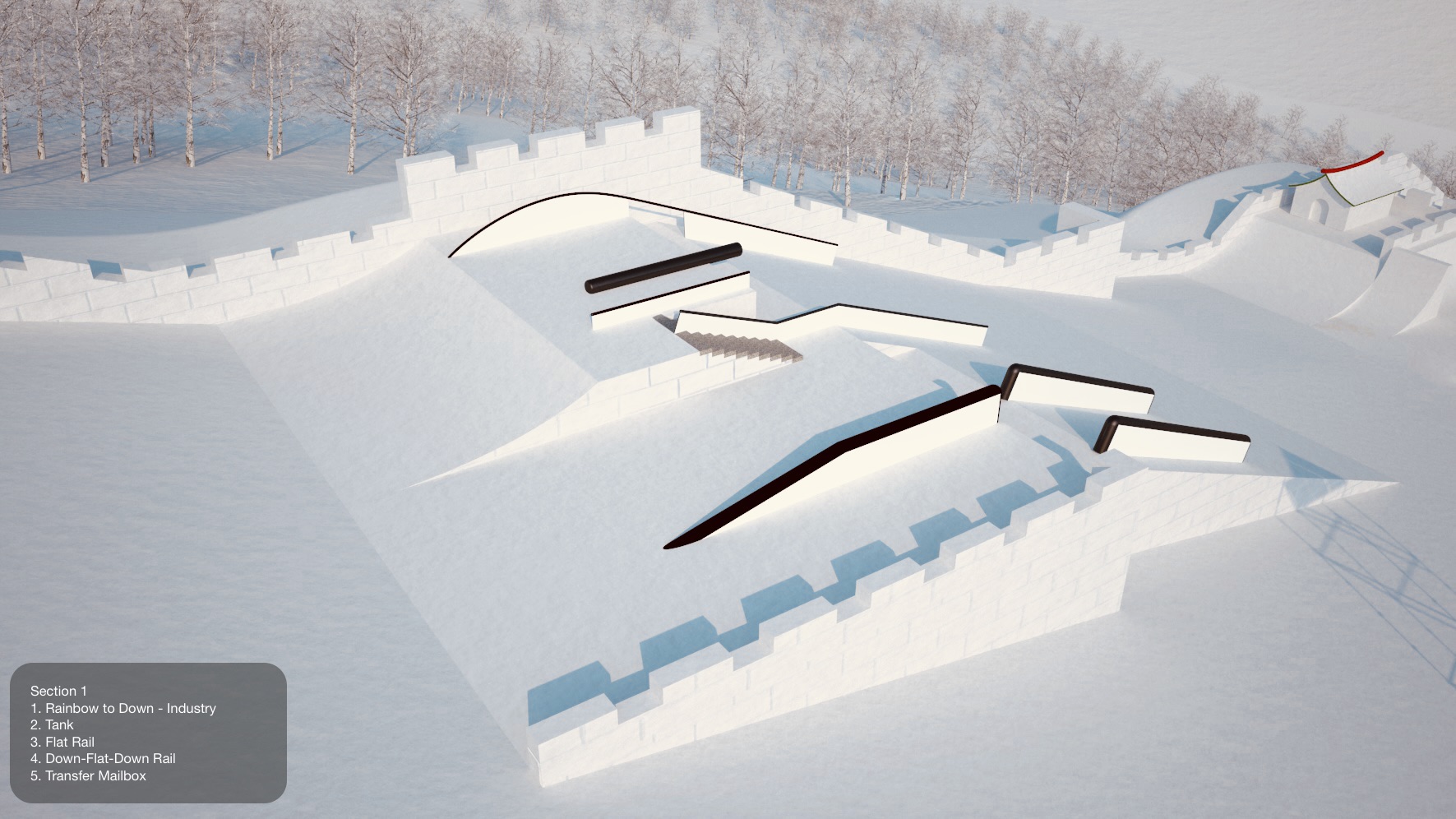 Section one and two have five main sliding features apiece – including a Great Wall watchtower feature in section two complete with slideable ridge beam on the roof. 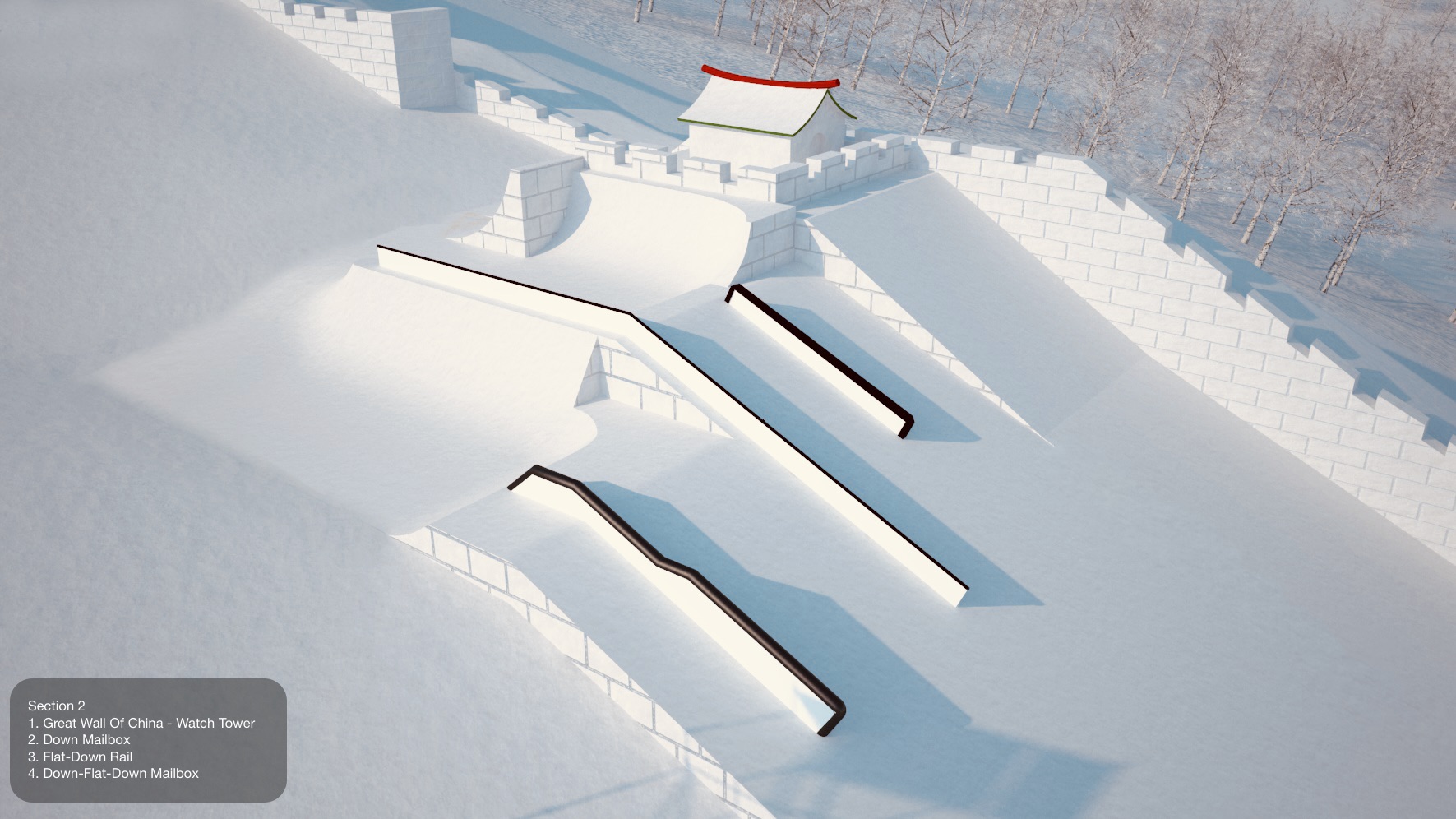 The third jib section is a rail/jump/butter box combo before the freeskiers and snowboarders head into the second half of the course for some airtime.

From section three competitors will flow out to the first of the jumps in section four, which is a redux of the ‘wing’ or ‘skew’ jump that was featured for the first time ever in PyeongChang, four years ago. The two imposing, twin, off-kilter kickers will send competitors over a table top that is 19metres to the landing.

Section five is a monolithic pile of snow that features roller-to-knuckle buttering options, transfer kickers and quarterpipes all leading to the same landing. With 5metre high kickers, a peak height of 9metres at the top of a roller, and a sweet spot in the landing that is some 21metre distance from the kickers.

The Beijing 2022 slopestyle course will finish off with a huge, old-fashioned straight kicker 5metres tall that will launch competitors above a 21metre ‘step-over’ table top.

Scheumann sees the Beijing 2022 slopestyle course at Genting Snow Park as the most advanced build he’s ever been a part of creating, but also just another step in the constant evolution of slopestyle skiing and snowboarding.

“Slopestyle venue design is always a special thing because it’s an integral part of the performance the athletes will put on display,” he says.

“With our current experience and tools, we can unite the functionality of the sport and the story of the host country’s culture. Incorporating the Great Wall of China into the build is a great story to showcase and tell to millions of TV spectators, while also serving functionally and aiding the athletes in telling their story to the world through their riding.”

Russia and Belarus banned from Winter Paralympic Games in Beijing

Can the IOC bounce back from Beijing political games?

The good, the bad and the downright ugly of the Beijing Games