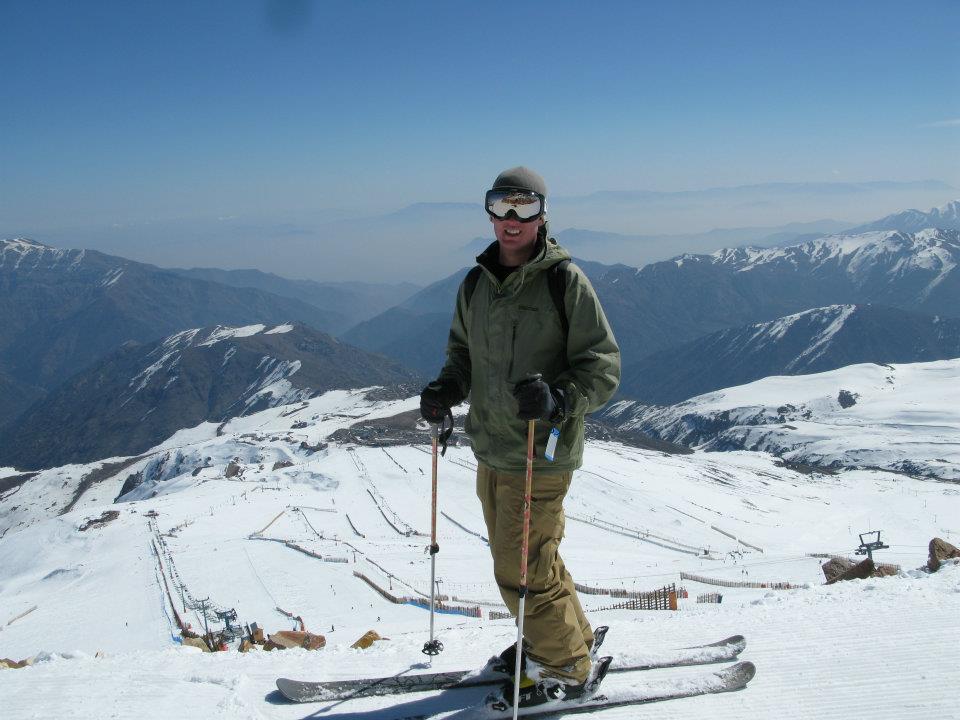 Andrew Snow just ticked off twelve and a half years of monthly skiing. That’s one hundred and fifty months, every month, year round, year in, year out. This is his story.

I worked in marketing at Mad River Glen, Vermont’s throwback ski area, for a few years right out of college. In 2004, an Australian friend who was working there as a seasonal employee suggested that I join him working lifts for a season at Mount Hotham.

At first I thought he was joking, since Australia was one of the last places I ever expected to find skiing. Once I looked into it, I realized that a southern hemisphere winter could be the best “summer” ever.

With plans to work at Hotham, I booked my tickets to fly down under that July, and I realized I’d be pretty close to skiing all 12 calendar months of the year. May was pretty easy, as Vermont’s biggest resort, Killington, regularly had lift-served skiing well into the month. That left June.

Fortunately, Stowe in northern Vermont had enough snow leftover for a late-May rail jam, and the snow lasted long enough to string together about 15 consecutive turns a week later in June. With those slushy turns on a short strip of snow, the streak began.

2004 was a bumper season in Australia and I loved everything about being at Hotham: the interesting ski terrain, the regular snowfalls, the camaraderie with my co-workers and friends, working in the great outdoors, living at the top of the mountain, and the list goes on.

I had only ever planned to work there for a season and then return home to a year-round ski industry job, but when my boss asked me if I’d consider going back to Hotham for another season, I couldn’t say no.

By this point, I figured I’d try to keep skiing every month as long as I returned to Hotham. There wasn’t a particular goal in mind, but it wasn’t too hard to do while I was doing back-to-back seasons.

One season at Hotham turned into two and two into three, and before I knew it, I was working my seventh Aussie season in 2010. There were a couple challenging months along the way: the dry winter of 2006 had me worried about October, but I stuck around the mountain for a week after the season ended (it was a ghost town), I hiked up the Big D, and skied down the remaining manmade snow.

I kept a journal of all my ski days and have pictures that I’ve taken from almost every single month I’ve been on skis (though many of the photos are just scenic shots of the terrain I’ve skied). It hasn’t always been easy.

The next challenge came in 2008, when June brought no snow and very limited snowmaking. Waiting until the end of the month, and realizing it wasn’t going to get better, a friend and I went back to the Big D where we skied small patches of manmade snow with just a thin dusting of snow in between, finishing up in mud at the bottom with Hotham’s mountain manager watching and laughing from his flat just above us.

In the northern spring of 2011, I decided that I wouldn’t be going back to Hotham. While I loved the endless winters of working back-to-back ski seasons, I was ready to stay in one place for a while longer, and I kept hearing how beautiful Vermont was in the summer.

At that point, though, I was at 90 consecutive months and I couldn’t stop short of 100.

Fortunately, there’s snow somewhere in North America all year long, and my job at the time let me fly standby for free on a domestic airline, so I mapped out a plan to take a ski trip each month of the summer. Trips to Colorado (Arapahoe Basin in May and June) and Oregon (Mount Bachelor in July and Timberline at Mount Hood in August) got me through most of the summer, and then I cashed in some frequent flier miles to visit South America for the first time and ski Chile in September.

I went back to Colorado in October when Arapahoe Basin was the first resort to open in the country, and I had successfully survived my first summer keeping the streak alive and enjoyed hiking, biking, kayaking, and trail running too.

In March 2012, I hit my 100th month of skiing. It had been a poor, dry winter in Vermont, but even Mother Nature helped celebrate with a great powder day skiing with friends and co-workers at Bolton Valley, where I worked at the time. We had a party to celebrate and many friends suggested it was time to take a beach vacation, but I wasn’t ready to finish yet.

I had set some rules, of course. I have to make ski turns at least one day in a calendar month to keep the streak alive. The turns have to be on snow (the “dry slopes” in the UK don’t count) and outdoors (Ski Dubai doesn’t count either). I don’t really have a minimum number of consecutive turns that I have make to consider it official, but I need to feel like I’m actually skiing.

A minimum of 10-12 turns would probably fit the bill. 2-3 turns on a pile of ice shavings outside a hockey rink wouldn’t count. The 15 turns I made on natural snow in Tuckerman’s Ravine, New Hampshire, in June 2012 do count (especially since I hiked a couple hours to get there).

Summer skiing was fun and I wanted to keep going even though I had hit my 100th month in 2012. I didn’t set a new goal, but figured I would keep going as long as it was fun. My employer ended the airline partnership that had allowed me to fly for free, so I got a little more creative using my frequent flier miles.

When flying was necessary, I’d make sure I could ski two months on a trip, combining June & July and August & September. Arapahoe Basin became my annual late-spring pilgrimage, Mount Hood the mid-summer staple, and Chile the late summer trip I looked forward to every year.

I mixed it up a bit, checking out Whistler Blackcomb’s glacier skiing one July, and returning to Mount Hotham instead of Chile in 2014, remembering how much I love the place and catching up with lots of great friends.

A couple of weeks ago, on May 1st, I reached 150 months. That’s 12 and a half years of skiing every single month. The streak has taken me to beautiful places like Oregon and Chile that I might not have visited otherwise, to say nothing of the countless ski days I’ve enjoyed in Vermont, Australia, and Colorado.

I’ve met tons of interesting people along the way and re-connected with old friends. I still love skiing every bit as much as when I started, if not more now that I have more places to enjoy it and friends to make turns with!

I won’t quit until it stops being fun. At this point, every time I get to escape the summer heat and go skiing in July or August, I’m excited about it. I’ll be back in Colorado at the beginning of June, and then this summer for something different, I’m planning to explore some of the summer glacier skiing in the Alps. I don’t know if I’ll push all the way to 200 months, but if it continues to be fun and feasible, I very well might.

I get asked if it’s a world record but it’s not even close, unfortunately.

In 2011, I even met a guy who was on a mission to ski every single day for a bunch of years – I rode chairs with him at Arapahoe Basin, Timberline, and Valle Nevado in Chile that same year! He made it to 2,993 consecutive days.

The Palmer chairlift at Timberline ski area on Mount Hood, Oregon, was installed in 1979 (the year I was born) and has helped the ski area offer lift-served skiing almost every month since then. As a result, there are a number of people who have been skiing every month since I’ve been alive.

I know people in Colorado who find snow close to home every month too. So there are lots of people with skiing streaks, but I think I’m unique in living somewhere that doesn’t have snow all year and needing to travel to keep my streak going. I certainly don’t know of anyone else in the eastern US doing this.