Home athletes Adrenaline, depression and death in the snow world 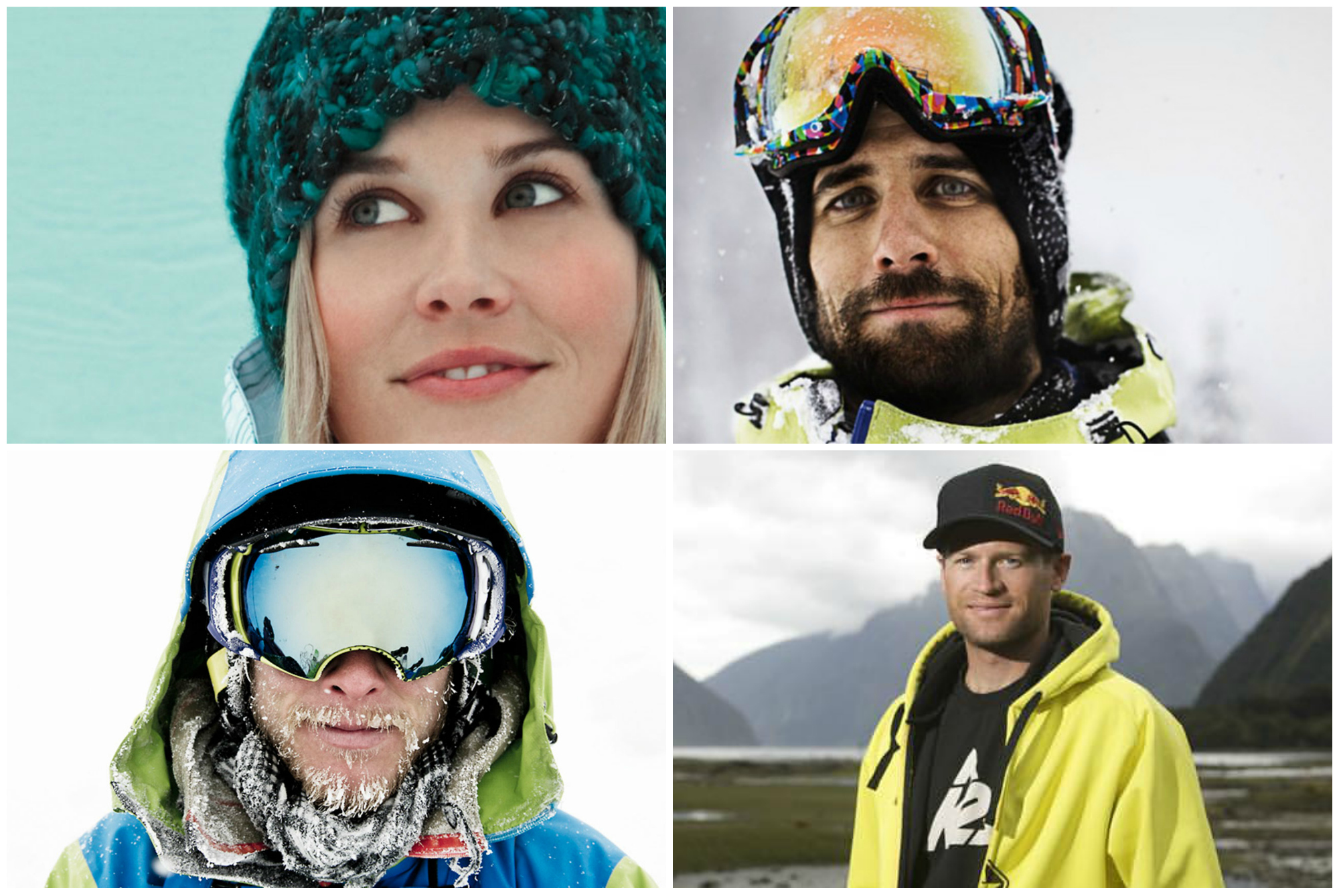 Hilaree Nelson (nee O’Neill) and Mike Douglas know first hand the impact of adrenal highs and lows, death and grief in the world of the extreme athlete. Story by Rachael Oakes-Ash (published in 2016 updated in 2019).

When I first arrived in Aspen for a three month stint a few years back I went in search of a yoga studio. What I found instead was a plethora of yoga classes offering fusion yoga, yoga with a DJ, hot yoga, extreme yoga, don’t stop moving yoga, super fast flow yoga and very little yoga that offered solace, stillness and quiet moments with the self. Why was I surprised?

Ski towns are built on adrenals, all that running up hill in summer and skiing down it come winter. Many residents don’t know how to stay still without planning the next epic endeavor. Some are so wound up tight and carry such little body fat that they look like they need a damn big glass of water, a bear hug and a lie down.

But the trouble with adrenals is they can come back to bite you, hard. Adrenal fatigue happens and when it does it can manifest in depression like symptoms including general malaise, brain fog, short term memory loss, anxiety and difficulty focusing.

Sleep will be impacted with insomnia or a need to sleep for long periods of time at any time of the day. Some, like one extreme athlete I spoke to off the record, may find themselves simply not even wanting to get out of bed for days.

Both stress and over training can lead to adrenal fatigue and burnout and the adventure athlete is not immune. The irony is you can’t run yourself out of burnout because the very act of constant running or skiing or cortisol increasing activities like climbing and base jumping created it. You’re better to go sit outside amongst the forest, by a stream, near the ocean. Just sit.

Then combine hard training with stress created from adrenal activity like choosing to ski a no fall zone line or climbing Everest then combine that again with more stress and fear when close colleagues and friends lose their lives doing what they, and you, love and you have a collapse just waiting to happen.

Not that it’s spoken about. Many athletes fear losing sponsorship, kudos and perceived back bone should they speak about the black dog that follows so many of them. In Australia alone 46% of people are expected to experience some kind of mental health condition at some time in their life and over 6.7% of Americans have depression at any given time. It would be remiss to think that outdoor athletes are immune.

Hilaree Nelson, 46, is an adventure athlete of extreme proportions. She is the first woman to climb two 8000 metre peaks in twenty four hours – Mt Everest and Lhotse. She has skied the Himalayan summit of Cho Oyu in Tibet alongside equally impressive peaks in Bolivia and Argentina and made first descents on no fall zone couloirs of Baffin Island in Canada. Last year (2018) she completed the first ski descent of Lhotse (fourth highest mountain in the world). In short she is a bad ass.

“All my life I definitely thought I was sort of laidback and chill person, I am starting to realize I am not at all, I don’t know why I had that perception for so many years. I am more type A than I thought I was” laughs O’Neill in the gondola in her home town of Telluride when we spoke with her in 2016.

“I think depression in general is still a tough subject to talk about. It’s certainly hard for me to talk about it, I don’t, but I often call it ‘the hole’. I come home after an expedition and I have stayed in my house for two weeks. I’ll go outside but it’s just really hard and I have good friends in town that kind of draw me out slowly.

It’s such a tough transition to go from climbing, to mom, to letting go of that, being a climber and then coming back in to being a mom, there’s no good way to do it, it’s just tough.”

There is a flipside to this though. QUT Professor, Eric Brymer, has spent considerable time researching the extreme athlete, adventure sports and fear. His research has shown that while adrenal sports may be considered both addictive and high risk they may also contribute to humility and calmness. Two qualities I have personally witnessed in O’Neill.

Salomon Freeski TV producer, director and athlete, Mike Douglas, knows all too well both the highs and lows of life in the extreme athlete world. He has won awards for his skiing and filming one day and then experienced the loss of some of his mates in the outdoor world at their own hand and at the hand of the sport the next.

“Dave Mirra, a BMX hero of mine, recently had mental illness and, and took his own life. I can see how that can happen for extreme athletes” says Douglas from his home in Whistler in 2016 after the death of Mirra from CTE related depression.

“Because when those (adrenaline) rushes stop happening it’s tough. It’s like it’s almost like a withdrawal that you go through, and you’re searching for that ski rush again and it doesn’t come normally in regular life. It just doesn’t.”

Nelson agrees. She describes her moments on the edge during expedition as ‘very present survival mode’, a mode she doesn’t find at home.

“I’m not thinking about anything and that’s what I like about, thinking about survival and any time you’re in that survival mode if you’re very present it’s totally an addiction” explains Nelson.

“That’s why it’s so hard to come back to your day to day life sometimes because there are so many distractions and your mind is working in the future and in the past and your phone is ringing.

When you’re in these intense suffer situations you’re really just thinking about one foot in front of the other, you’re taking care of when you’re going to eat and how much water you’re drinking and it’s just an incredibly present, satisfying emotion.”

When I ask Nelson if she would consider meditation instead she responds with “I have tried meditation many times. I would really rather get this serenity from meditation versus two month long suffering expeditions but I’m not there yet.”

When I challenge her as to whether she would genuinely prefer to get the serenity from meditation she says “maybe not, probably not, no, I probably wouldn’t.”

For Douglas those moments spent skiing are ‘the closest thing you can do to flying with your feet on the ground” and explains the hook to keep doing it is the adrenaline rush fueled by dopamine.

“what we’re seeing now is sort of the progression of the sport has gone so far that it’s so dangerous for really good skiers to get those feelings, that I kind of reached a point where I realized like I wasn’t prepared to push myself to sort of that next level.

And I was kind of stressed about that, because I didn’t know what was going to happen, you know, once my skiing got mellower. I mean, am I ever going to get those highs again? And fortunately for me, I found that in filmmaking again. And that’s a huge relief for me, because I was terrified that that wasn’t going to happen again.”

**Mike Douglas talks with SnowsBest about adrenaline, loss & depression in this video edit.

Douglas’ terror is real and not just fuelled by the fear of losing his buzz. He has, in recent years, lost close friends Shane McConkey, Sarah Burke and JP Auclair in separate ski accidents that claimed their lives (and more recently since this piece was originally published, Dave Treadway). Grief is a constant in the world of extreme sports and grief itself can lead to life doubt.

“I think I’ve lost, like, five or six really close friends. That’s what really hits you. Every time this happens, you look at yourself and what you’re doing, and you try to find a way to justify, oh, I do it differently, or you try to learn something from that experience. You try to, to take it away” explains Douglas.

Andreas Fransonn died in an avalanche in South America

Shane McConkey died in a ski base jumping equipment failure

JP Auclair died in an avalanche in South America

Sarah Burke died due to a halfpipe training accident

“But the one thing that I keep coming back to is that there is risk in life. I mean, we’re all going to die. You can’t get away from dying. I’ve got a family so I definitely do whatever I can to minimize the risk, but it’s not going to stop me from going out into the mountains or going on an adventure to a faraway land. At a certain point you have to take some risk, or you never really get to live. “

Isn’t that why we all take up adventure sports in the first place, to live more fully? Perhaps the answer, like all things in life, lies in moderation but try telling that to an adrenal junky (myself included) or the flow yoga addicts in Lululemon on the main street of your ski town.

The good news is depression is slowly being acknowledged within ski town communities. The Aspen Strong Foundation was founded in response to the high suicide rate of Pitkin County and holds regular events to keep community members connected, not isolated.

Athletes are beginning to discuss their own anxiety issues. Olympic medalist snowboarder Torah Bright writes in her autobiography about her depression after the death of her friend Sarah Burke and the breakdown of her marriage. Kevin Pearce documented his own depression during his four year recovery from a tramatic brain injury sustained while snowboarding, in the film The Crash Reel.

Surfer Sean Nee wrote about his for The Inertia and Josh Dueck revealed his own struggle to SnowsBest last year (video interview below).

Some would say it takes more courage to talk about our internal world struggles than it does to summit Everest. Perhaps we’ve been looking at the real courage of adventure athletes all wrong.

If you or someone you know needs help, the following services are available within Australia:

WIN a ski trip for two to Japan!!! Enter here.