It’s been a long anxious day in Jindabyne and surrounds as residents who have stayed to protect property and support the fire and rescue services have waited for emergency alerts and the promised drop in temperatures.

Thankfully the town is not under any immediate threat from bushfire fronts (at the moment, though that could change). Temperatures have now dropped to low thirties and the region has been plunged into dark blood red skies and pitch black conditions.

At the time of publication, there are four emergency warnings in the Snowy Monaro region where the window of opportunity to leave has now closed.  The out of control fire at the Adaminaby Complex, the Peak View area north of Bredbo River, the Doubtful Gap Trail fire in the Snowy Plains Eucumbene Cove, Braemar Bay and surrounding area and the fire in the Inaloy Trail area as well as the Snowy Valleys Dunns Road fire.

A “fire-generated thunderstorm” has formed over the Doubtful Gap Trail fire in Snowy Monaro. The RFS has warned that the weather pattern is “very dangerous”.

There is also a Watch and Act alert for multiple fires burning to the south of Mount Kosciuszko. The fire is currently 200hectares in size and is out of control and if you are in the areas of Thredbo Village, Little Thredbo, Bullocks Flat, Crackenback and surrounds, you are at risk. If you haven’t evacuated already, your safest option is to leave now towards Jindabyne via The Alpine Way.

Please check the RFS Major Fire Alert Updates regularly for up to date and official information.

Thredbo village has already been evacuated except for essential personnel and fire fighters. This is a screen snapshot from the Thredbo webcam this afternoon of the Kosciuszko walking track. 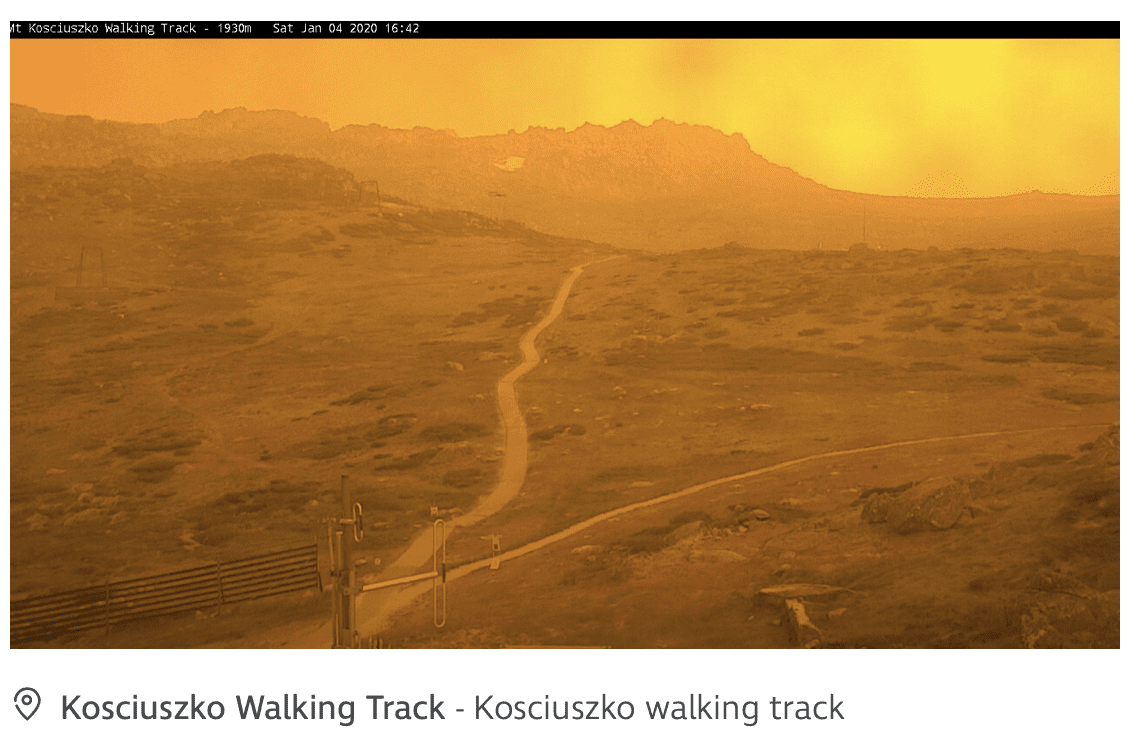 Residents from the lakeside town are posting imagery of the 4 o’clock sky as the world turns red orange with thick smoke and embers.

More orange skies in Jindabyne as posted by Crackenback Farm Restaurant and Guesthouse.

This footage is from mid afternoon.

The shores of Lake Jindabyne now have an eerie glow.

This video is from a pitch black sky in Cooma at 4.30pm from Fiona

“We are in for a long night and we’re still hit to the worst of it” said Premier Gladys Berejiklian at a press conference of the New South Wales bushfire zones today as conditions deteriorated in the late afternoon.

The southerly change is expected at 5pm in the South East region of New South Wales.

“It’s going to be a gusty southerly, volatile southerly with wind strengths up to 80kms or more on the coastal strip with a dangerous few hours” said NSW RFS commissioner Shane Fitzsimmons of the worsening conditions across the state’s coastal areas into evening.