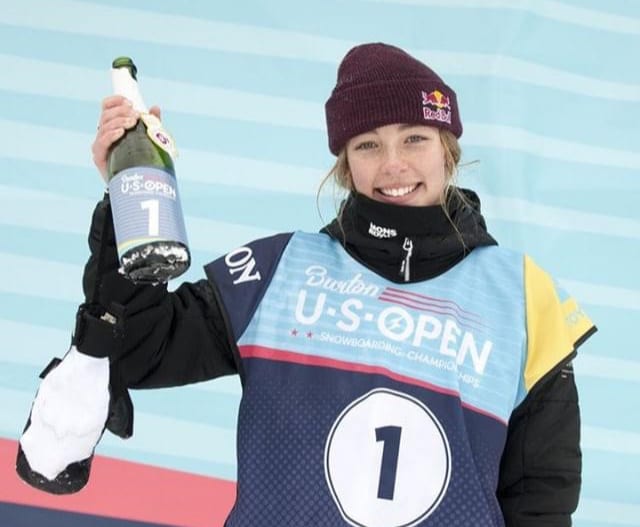 “I can’t even explain how I’m feeling right now,” says Sadowski-Synnott. “It means so much, it was one of the first contests I watched when I started snowboarding and I’m just so happy to be here.

“It’s been an amazing season and I wanted to finish it on a high and I’m just so happy to do it here at the Open.”

Sadowski-Synnott came in to today’s finals as the top qualifier and was the last of the six competitors to drop in to the course. Knowing that she would need to bring her A-game in order to secure a podium finish, the Kiwi had focused on raising the technicality of her rail tricks. The plan paid dividends right from the get-go with an 8.7 from a possible 10 on her very first trick – a switch boardslide 270 out – on the top rail.

Sticking to the same jump combo as her qualifier run, Sadowski-Synnott scored a nine out of 10 for her switch backside 900 off the first jump and her overall score of 82.55 put her straight to the top of the leaderboard.

With the wind picking up and snowfall reducing the visibility, competitors struggled to land their second runs. Sadowski-Synnott had her own dramas to contend with when she took a gouge out of her snowboard by clipping one of the rail features and then took a fall on her first jump. Forced to make an equipment change, she faced the unsettling prospective of taking her final run on a new board.

But in the end, the third run would be a victory lap with second-placed rider Julia Marino taking a fall on her third run and unable to improve her score.

READ MORE
Is Scotty James the funniest snowboarder ever created?
Share with your crew
158FacebookTwitterLinkedInEmailPinterest
158
SHARES