Be safe, they said. Every Japanese person I told I was going to Arai had the same words. Stay safe, be safe, go safe. By the time we got in our taxi for the fifty minute ride from the boutique ski resort of Madarao we were pretty sure we were going to the Japanese version of La Grave.

Arriving after dark in a snow storm only added to the  stories swirling in our heads. Come sun rise, after dreams of death, the mountain itself was hidden in a blizzard outside of our window and my friend was penning her will.

We retreated to the Lotte Arai hotel onsen to soak away our fears in surely the most five star resort in Japan. Others must have been too scared to leave their rooms and we found ourselves wandering the plush carpeted halls to Japanese degustation breakfasts alone.

Lotte Arai is an impressive (and luxe) resort before you’ve even clicked into your ski boots. Originally bought in 1993 by Hideo Morita, the son of the founder of Sony, Aki Morita, the resort was then run into the ground and eventually closed in 2006. It lay abandoned for ten years before the Lotte group bought the resort complete with gondola, chairlifts, hotels and more for Yen 1.8 billion (AU $20.5 million) and then invested another fortune restoring the resort to it’s original glory and then some.

What followed was a refurb that only big Korean money can buy. Think lounge bars, bakeries, whiskey bars, private karaoke rooms, indoor swimming pools, day spas, a zip line and five star accommodation from standard rooms to private penthouses. That’s before you’ve even arrived at the gondola building across the snow laden courtyard.

There you can expect a shiny new ski school from the names behind Myoko Snowsports, complete with child care centre, indoor climbing wall, trampolines and a purpose built beginner groomed ski run with chairlift. Take it in, as this is not a resort known for groomed runs, though the 5.2 kilometer groomer from gondola top to bottom is both a thigh burner and an exercise in immaculate chorduroy that the Japanese worship.

It is the rest of the resort we fear the warning came from. Lotte Arai is 70% ungroomed. Translated? The resort has 10 avalanche controlled backcountry style terrain zones and over 1000 meters of vertical from peak to base. The zones are open and rolling with some trees and some bigger lines towards the peak.

To us this didn’t spell danger, it spelt heaven (pun not intended) especially on day two when the sky cleared and we were presented with a bluebird powder day. Sorry, so not sorry. Nope, not sorry at all.

Lotte Arai Resort has employed one of the best avalanche forecasters in the business, Dave Iles from Whistler. He and a team of highly trained local and international patrollers spend their days working on the terrain after big snow falls (and there are a lot) to ensure it is safe to open. When they do it is pure powder paradise for those frustrated by the more rigid resorts of Japan where off piste is still considered a no go zone. Hence the ‘be safe’ comments. It’s all relative to what you are used to skiing.

But don’t take it lightly, either. Yes there is plenty of off piste terrain but there are also terrain traps that funnel into avalanche gullies. Do not go under the ropes into strictly off limit terrain, no matter what. 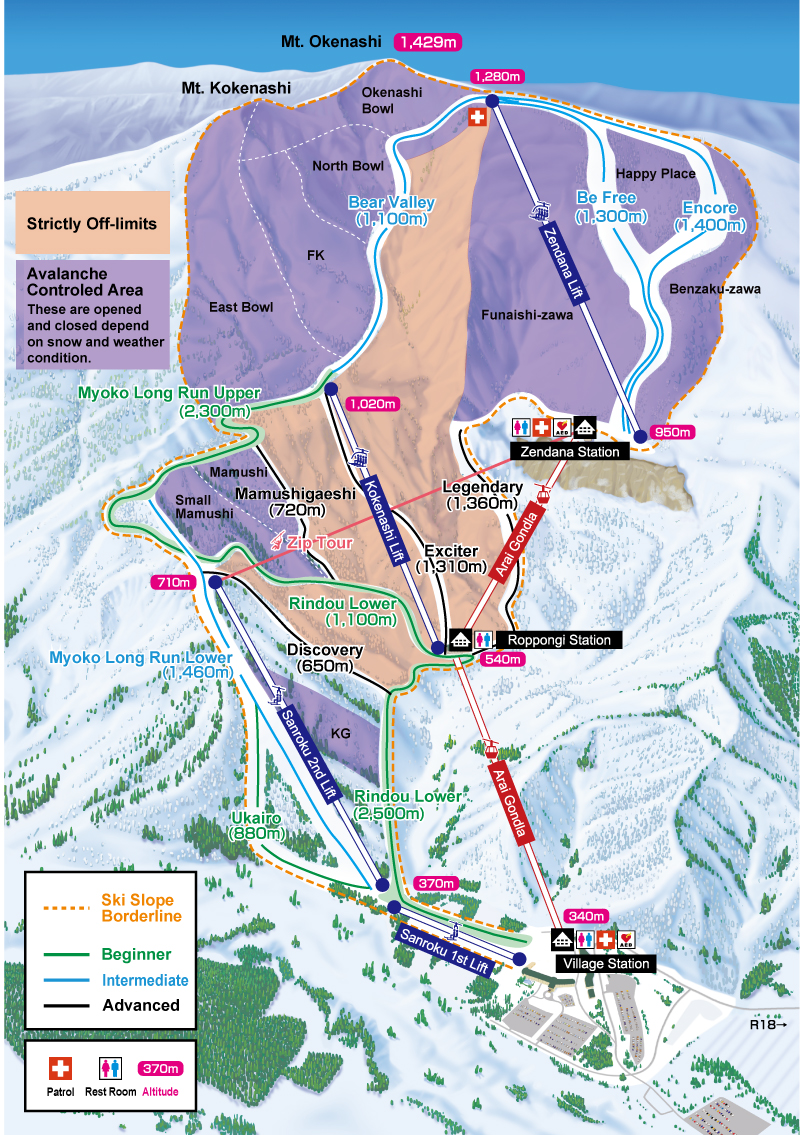 Like most of Japan the runs are not super long, nor are they super steep. You’ll find enough pitch in the Small Mamushi zone to fuel the powder joy and get some rhythm to those turns and the hike up Okenashi will reward you with big wide open bowls ready for some loving.

All of the zones channel back onto a groomed cat track that loops the resort and takes skiers and boarders back to mid gondola station or the Kokenashi and Zendana chairlifts to go back up and do it all again. We got there in time for first lifts with our guide, Charlie, from Myoko Snowsports and the resort marketing manager, Tomoyuki ‘Tomo’ Yasuda who is a former pro snowboarder. What followed was a good two hours of first powder tracks every time before coffee then another three hours once more zones started to open up high.

READ MORE
I skied Japan before you did, no really, I did

The beauty of Arai is, like Niseko, it is close to the coast so it receives plenty of snow (over 15 meters a season). The resort had already received 12 meters in December and January combined by the time we arrived and the snow is traditionally light and dry.

If you are not comfortable skiing off piste or in powder then this may not be the resort for you, however the way the mountain is laid out it also makes it a perfect place to try powder skiing as you are never far from a groomed cat track. A lot of the terrain is also above the treeline which makes it easier for some. Plus Myoko Snowsports pretty much employs the Falls Creek ski school of instructors so you’ll have English speaking guides and teachers to get your powder legs ready.

Lunch was, as expected, a dining delight (try the beef on rice) in the gondola cafeteria and the rest of the day was spent inhaling pastries to replenish the energy lost before an hour onsen soak and prized sashimi presentation from the chef at Hakobune Bettei. Just one of seven plus restaurants on site.

This season is clearly a soft opener with time spent ironing out any kinks, not that we saw or found any on our visit. Though some AllPress coffee from Tokyo headquarters would be nice to see there.

Word on Lotte Arai is already out amongst those in Honshu. Every Australian we met in Madarao and Myoko spoke of Lotte Arai and had either been or were going. All of them begged us not to write about it.

But here’s the thing, the resort will need the rooms filled to keep the mountain going and even if all of the guests staying at full capacity all ski the mountain, then we are talking of only 500 skiers based on 2 per room on any given day.

Rooms at Lotte Arai start from around Yen 26 000 though we expect package deals will soon be revealed when the new rates are announced in March. Lift passes are Yen 6000 for a one day ticket but the hotel has accommodation and lift pass options as well as western or Japanese half board options with breakfast, dinner and onsen.

Most skiers this season have been taking day trips from nearby Myoko Kogen, Nozawa Onsen and Madarao resorts and timing their trips around powder laden storms. But we think the new hotel rates and offers coming out this March for next season may change that and fill the halls with more people. Not too many, just enough.

LOVE JAPAN? CHECK OUT OUR JAPAN FEATURE ARTICLES & INSIDER GUIDES ON ALL THINGS SKI AND SNOW IN THE LAND OF THE RISING SUN.

SnowsBest was a guest of Lotte Arai resort