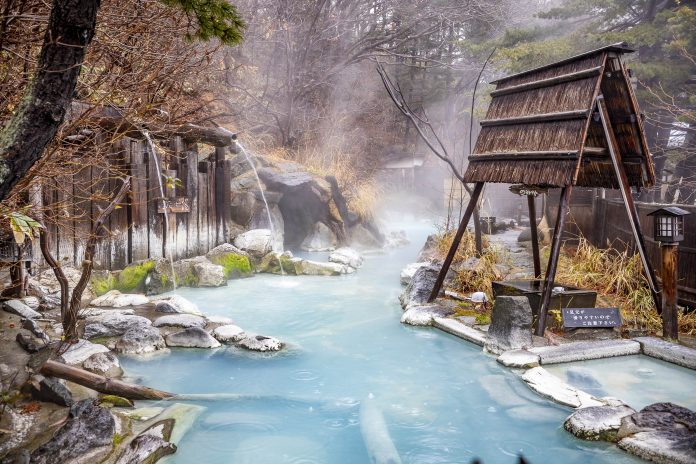 After my first visit to Japan 12 years ago, I instantly fell in love with the quirky Japanese culture combined with the bottomless Japow and decided to call this country home. I met my partner Darren soon after and we spent the first years of our life here riding waist deep turns all day, soaking in onsens and gorging ourselves on cheap Izakaya dinners.

There is a nostalgia to “old Japan”, those heady snow days before global popularity created international resorts and softened the culture we love. But then, we discovered Tohoku, with a recent trip to the north of the main island of Honshu where my partner, Darren, and I explored Yamagata Prefecture. 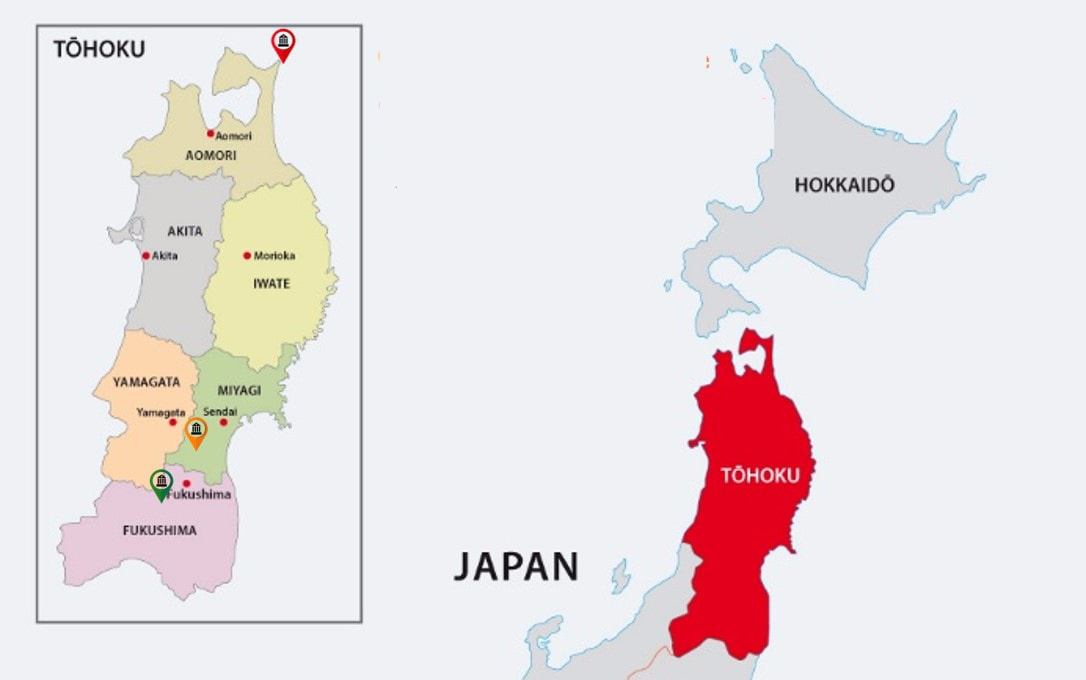 After a full first day spent eating every delicacy available, on route from Fukushima City to Takuyu Onsen hot springs resort, I knew instantly that this trip was going to be something special.

We were off the beaten track and in the thick of Japanese culture once again, the reasons why we had originally settled in Japan.

Tengendai Resort was one of our first ski and snowboard stops. It reminded me of skiing at the New Zealand club fields, only with better infrastructure (thankfully not a nutcracker in sight). We boarded the bright pink cable car and instantly brought the average passenger age down by about 30 years.

On reaching the top it was evident that the resort probably hasn’t changed a day since they were our age either. Retro orange bathrooms, bright purple lockers and a hand made Ski Patrol sign, I knew we had just landed in heaven. Along with the other 20 people visiting the resort we proceeded to have top to bottom, fresh, blue bird turns, the entire day.

Tengendai’s tagline is ‘100% Powder Snow’ and they delivered on this promise.

And with beginner to expert slopes, never ending views from the peak and some fun side hits along the ridgeline, it has something to offer for everyone.

The resort is also light on the pocket, with lift passes still less than ¥5,000 for a day pass and lunch for a mere ¥1,000. It was a huge serving of curry that got us prepped to return to an afternoon of fresh turns (well actually I wanted a sleep post curry but managed to pull it together).

Our accommodation was at Shirabu Onsen, the 700 year old village situated at the base of Tengendai. Imagine an ancient water wheel, thatched roof ryokans, steamy onsen water and wait for it, snow monkeys. I felt like we had walked onto a film set for an old Japanese movie.

On our arrival we were greeted by the super friendly family who run the ryokan with full body/floor bows and huge smiles, a gorgeous traditional Japanese room and a never ending dinner. Literally. Never. Ending.

Fresh local produce (including the famous Yamagata Beef) was served to us for over three hours. After seriously over-indulging, we retired to a private onsen. All these years in Japan and I didn’t even know ‘private’ onsens existed.

Next was Zao Onsen, with a sneaky stopover at Takahata Winery for a few sips of their multi-award winning produce. I am a massive wine lover, but usually very skeptical of Japanese wines. So, I was pleasantly surprised with one of the nicest chardonnays I’ve tasted and some delicious oaky reds. It also has a beautiful vista and I could have stayed all afternoon. But the slopes were calling.

When we arrived in Zao, it was literally LOVE at first sight. It is vast – with over 14 different slopes and 12 courses, serviced by 34 lifts. There is so much terrain it’s overwhelming with loads of tree skiing and further backcountry skiing afield for the highly skilled.

You can even ski deep pow between the famous snow monsters (snow covered trees) whilst admiring uninterrupted views over the sea of clouds (unkai) and mountains beyond. To top it off they have a 250-year-old, 2.3-metre-high Buddhist statue at the peak of Zao Onsen Ropeway which marks the top of their 10km run appropriately named “Utopia”.

I didn’t think it could get any better, until we finished on the slopes. We started with a healthy vegetarian set lunch at Shiba Mama’s for approximately ¥1,000 (AUD$11).  Shiba Mama herself greeted us – a local woman who has taught herself multiple languages just so that she can make her foreign customers feel more comfortable.

We strolled the narrow, smokey onsen streets, admiring and visiting all the trendy modern cafes, bars and gift shops Zao has on offer. We are not talking junky gifts – these were reasonably priced, quality, bespoke and handmade items. My favourite store was Zao Onsen Yutabiya TAKAYUDO, solely dedicated to creating beautiful onsen products to remind you of your time at Zao.

After going on a shopping frenzy and loading my pack with gifts (mostly for myself) we visited the Yamagata Sake Museum and Bar, in the centre of the village, where we embarked on a cultural journey into the history of the local sake. There was tasting of course. I was also skeptical of sake until this point (clearly I had only been trying the type served at those dingy bar parties years ago). These were light, sweet, delicious, and extremely drinkable.

This was all topped off with a hilarious night at Kiraku Sushi, watching the chef/owner slice sashimi with surgical precision and the Mama-san proudly provide us freshly picked mushrooms from the local mountain. Not to forget some pats with the restaurant neko–chan (cat) and of course more sake (yikes).  We finished up with a compulsory pre bed onsen back at the Hotel Lucent Takamiya.

Despite having a scoring headache, we were able to ride it out with some all time lines and early season Japow. This is undoubtedly the best ski holiday we have had in a long time. I highly recommend it for those who want a budget friendly ski trip with complete Japanese immersion.

Thanks Tohoku – see you again soon.


READ MORE
Hakkoda ski resort and beyond, the best of Aomori in Japan
Share with your crew
394FacebookTwitterLinkedInEmail21Pinterest
415
SHARES