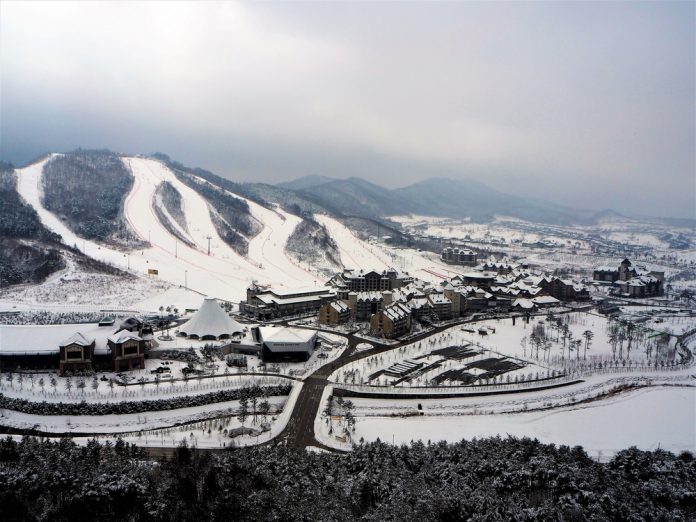 SnowsBest sent veteran snow journalist Robert Upe to PyeongChang prior to the Winter Olympics to assess the host nation’s progress.

Two months out from staging the PyeongChang Winter Olympics in South Korea, officials have painted a rosy picture for the event that will attract 50,000 athletes from about 100 countries.

Among the athletes will be a contingent of 50 Australians, including medal hopes such as mogul skier Britteny Cox and snowboarder Scotty James.

Most venues are finished, or near finished. And, according to officials, sluggish ticket sales have started to take off since the Olympic Torch started its journey around the country on November 1.

They say the constant threat of hostilities from North Korea, including the firing of another test missile last week, have not affected the Games.

“The provocations of North Korea are not a new event and the tensions are between the military forces of the two Koreas,” says Korea Tourism Organisation chief executive Jung Chang-soo.

“There have never been any terrorist acts against civilians (by the North Koreans) and we intend to run a safe and peaceful Games. There have been no countries, or athletes, who have expressed any safety concerns to us.”

Just days ago, Snowsbest.com attended a press conference in PyeongChang, where the world press was briefed on the latest Games developments by the PyeongChang Organising Committee.

The Games will be on from February 9 to 25, followed by the Paralympic Winter Olympics from March 9 to 18.

Officials says that 52.5 per cent of an allocated 1.07 million tickets have been sold.

“Korean people are most interested in ice sports and (domestic) ticket sales are highest in these areas,” Yeo says.  “The foundations for winter sport in South Korea are relatively weak, but they will be increased significantly with the Winter Olympics,” he predicted.

Snowsbest.com inspected some of the venues last week, including the Phoenix Park ski resort, the Alpensia Ski Jumping Centre and Gangneung Olympic Park.

At Phoenix Park, the venue for freestyle skiing and snowboarding, the scaffolding is up for the grand stands and there’s already a 50-centimetre snow cover with 21 of the resort’s 22 slopes open. However, if you are intending to go to the freestyle competition, don’t expect to get any skiing done in between events. The resort will be closed to public skiers during the Games.

Early snowfalls, and extensive snowmaking, have allowed South Korean resorts to open a week earlier than usual (in the last week of November).

“The early snow is a good omen,” says the mayor of PyeongChang County, Sim Jae-kook.

The Alpensia Ski Jumping Centre, built in 2008, is also covered in snow and ready to go, while the final construction work is being done to the interior of Gangneung Olympic Park, where South Korea is expected to dominate short-track speed skating in front of massive crowds. This is the pet event of Aussie Steven Bradbury who famously won gold in 2002 when his opponents fell over on the last corner.

Ian Chesterman, the chef de mission for the Australian Winter Olympic team, has travelled to the competition sites multiple times and says they are in “good shape”.

“The field of plays are very good,” he says. “Successful test events have been conducted and the venues are close to where the athletes are staying. It’s great for athletes to be close to the venues.”

In other developments to coincide with the Games, a new terminal is due to open at Seoul’s Incheon Airport on January 18, a new cruise terminal has been built, and a high-speed train will start running from Incheon to Winter Olympic venues (about two hours and 300kmh) at the end of the month. During the Games, there will be 51 trains daily.

A veteran US journalist, who has been based in South Korea for more than 50 years, told Snowsbest.com that he hadn’t noticed much hoopla about the Games yet. But he thought things may start to hot up now that the Games are imminent.

South Korea has a good track record in staging big events, including the 1988 Summer Olympic Games, the 2002 FIFA World Cup and the 2011 World Athletic Championships.

Bookmark our SnowsBest PyeongChang site for all the Winter Olympics action.

Another medal for Australia and Simon Patmore at the Paralympics

Perrine wins her second medal for Australia at PyeongChang