If you’ve ever considered heli skiing but think it out of your skill level or league, think again. You can now build confidence, technique and off piste skills with dedicated ‘prepare to heli ski’ camps that culminate in a day of heli skiing to put your new found skills to the test.

Say what? This magic idea (it’s a no brainer, people) has been packaged up in a two week Ready to Heli camp by the innovative folks at Nonstop Snow who run a variety of different  improvement camps for all ski and snowboard types in Fernie in Canada.

The concept for the Ready to Heli camp is simple, sign up for two weeks, receive daily tuition and a host of extras, cat ski at the end of week one with your new found off piste skills then up the ante the next week with more tuition and finish with a heli ski day with your tuition group.

So they did and we (being me) went along to experience the bulk of the camp and see if it lived up to the hype.

Lay me down to sleep

One of the cool things about Nonstop Snow is that everyone doing a camp or course beds down in the same lodge in downtown Fernie in British Columbia, Canada. No, it’s not school camp, but it does provide a community feel and instant friends if you’re traveling alone.

Some folks choose to share a room but I took a room for myself (I’m an introvert extravert). All the rooms are spacious with two queen size beds, fridge, ensuite and balcony and plenty of space to get away when you want some ‘me time.’ The Red Tree Lodge has a communal lounge area, a bar and a dining area for breakfast daily.

The courses do include three dinners in the week that are also held in the lodge. Nothing is ‘compulsory’ we are adults after all but it’s nice to have the mix of course dinners and free nights (again, introvert, extravert). There’s also an après program with ice hockey matches and the like.

One of the dinners is the first night welcome dinner when everyone descends upon the bar for drinks, sizes each other up and makes assumptions of each other’s skiing or snowboarding ability while in civilians clothes. The ‘ready to heli’ camp folks are divided into their groups and dine with their ski instructor.

I end up in a group of women and one male of varying ages from twenties to sixties, from various corners of the globe including Switzerland via Scotland, England, America and Australia and we dine with our female instructor, Bridget ‘Bee’ Hempsted, who is a complete long time dynamo.

The usual hustle of who’s skied where and when and how many times is thrown across the table over three courses as we settle our nerves about being in the right group. It’s all good fun and some stay up gas bagging with wine and others crawl to bed with jet lag.

With the ice breaker done and dusted we rise early and take the yellow Nonstop snow bus (it’s an old school bus) to the mountain. The shuttle goes several times a day so you can get up early and leave late or vice versa. If you have a car, like me because I like my freedom (detecting a theme here) then you can go at your own pace.

Day one pretty much sets up the pace for the rest of the week. From 10.00am (civilized start) to 3.00pm (or later depending on your group’s desire) we ski with Bee like a mother duck and her ducklings, following her into the woods, over rollovers, down mogul fields. All the while she’s giving us tips and encouragement and video analysis that makes us all hang our head in shame.

You think you look like Lindsey Vonn in your head then you realise you’re more like a giraffe, albeit a short stumpy one, all legs in the wrong places, bum out to the world. 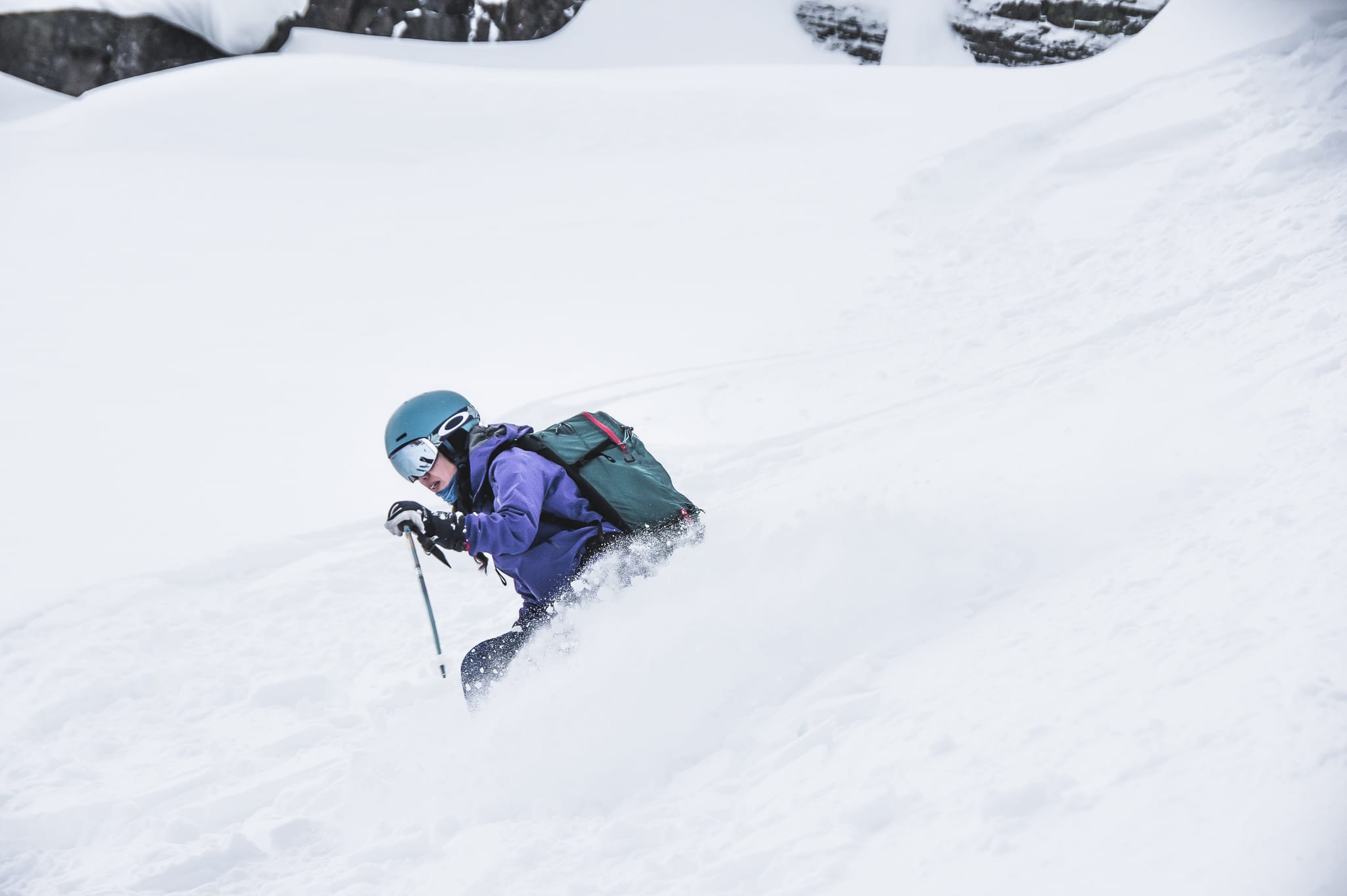 The male in our group has departed for another posse more ‘suited’ to his abilities (they don’t talk so much) so we end up all women who share a love of snow and a chat. They are overall a supportive bunch and while one is a total natural at moguls, as fluid as a dolphin in the waters, another is an expert on the groomers, carving them up like a roast on a Sunday.

One loves trees, another speed, another likes to get air. It’s an eclectic bunch that high five and support each other with every run. Mother Duck shakes her head at our incessant chatter but secretly smiles as she skis off in front. Each day we progress to more technical terrain or when the powder comes we play in the off piste.

Fernie is made for improvement courses. The ski area serves up over 2500 acres of seriously good skiable terrain across five alpine bowls . It has over 1000 metres of vertical with 145 named runs and a hell of a lot of off piste and the resort is divided into 30% beginner, 40% intermediate and 30% advanced so you won’t get bored as you progress.

All of our group is fluent in off piste experience, though some haven’t skied trees before. A couple have heli skied and cat skied and others have not done either and openly discuss their anticipation of what’s ahead.

One morning is dedicated to Nonstop first tracks when all the groups on different Nonstop courses take to the mountain before the general public. It’s a bluebird day, the slopes are like velvet and we get to open up the skis and let them rip past Mother Duck (if we dare). 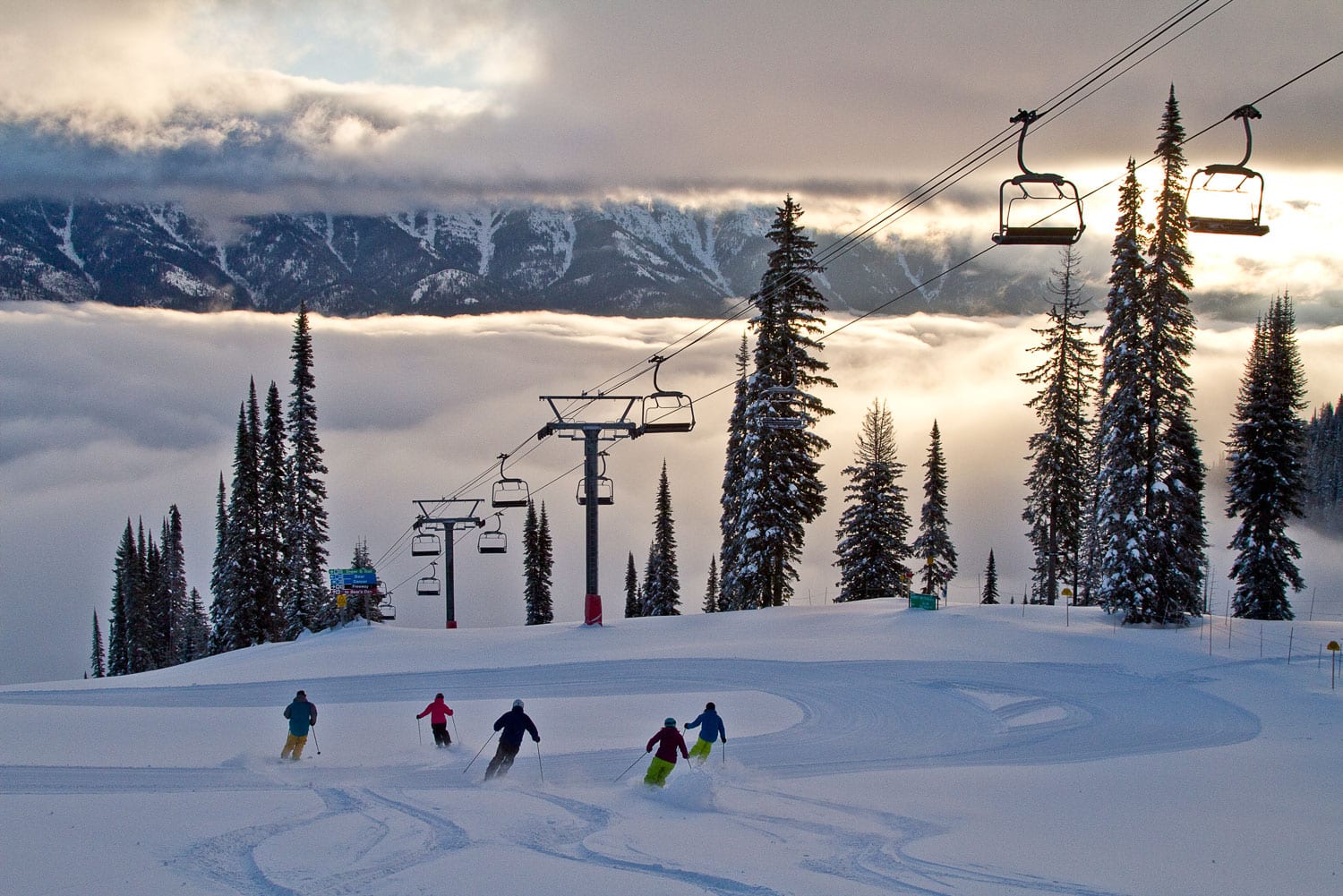 The week is filled with lots of laughter, education and confidence building plus lunch at one of the 9 on mountain restaurants each day. Wednesday is a free ski day without your instructor so you can leisure ski and put your skills to the test. Weekends are also tuition free so you can rest your legs with some town time after your cat ski or heli day or keep burning those thighs. Those wanting to extend their skills further can sign up for a one day avalanche course on offer during the two weeks.

Check out our Instagram Story from our Fernie Nonstop week.

Come Saturday and the group is piling into a cat at Fernie Wilderness Adventures. Lucky for us a surprise 50 centimeters plus of powder has fallen from the sky overnight so we are already frothing. I watch as my comrades take their first turns in backcountry powder and I bask in the glow of their beaming smiles when they realise ‘they’ve got this.’

A week ago they would have doubted themselves, but not now. Far from it. I have to push them out of the way for my first tracks they’re that eager.

The following week repeats the process of the first week only the cat is replaced with heli and the group is shuttled over to Panorama Mountain Resort for a night followed by a three run heli ski day with RK Heliski. No, you won’t be jumping from a chopper with skis strapped to your legs, no you won’t be clinging to sixty degree spines akin to Alaska. Only the fools and Red Bull experts do that.

The terrain is ideal for first timers wanting to get their heli legs and the crew at RK Heli have a top notch operation complete with cooked breakfast in their base lodge, professional heli ski guides and a stunning panorama (see what we did there) of mountain peaks in which to make your first turns.

We love the mix of course time and free time, the late morning starts, exclusive first tracks on one day for Nonstop course members, Mother Duck (Bea) and the downtown lodge that is dedicated to Nonstop. The location of Red Tree Lodge is ideal for those wanting to wander into town for the best Latin American fare in a ski town ever at Nevados.

The price. We think the dollar cost provides exceptional value for what you get out of it.

Breakfast was, at times, a tad challenging with food and crockery shortages (yes, I had slept in so, my bad) but with a Main Street filled with cafes a block away for Australian food and coffee snobs (yes, that’s me) it didn’t prove a long term problem.

Fernie gets cold, really cold, so take hand warmers, buy some boot warmers or the boot socks (these are a wet suit material that go over your boots and work a treat) and prepare to spend some time in the warming huts dotted over the mountain if you feel the cold.

Do it. If you have every wanted to heli ski but think you’re not good enough, or you don’t want to do it alone, then this course will give you a mix of ski improvement plus a rocking snow holiday in a stellar location filled with beauty and a heritage town. By the time you take your final heli ski run you will wonder why the hell you ever thought you couldn’t do it.

The need to know

Rachael Oakes-Ash was a guest of Nonstop and Destination British Columbia.