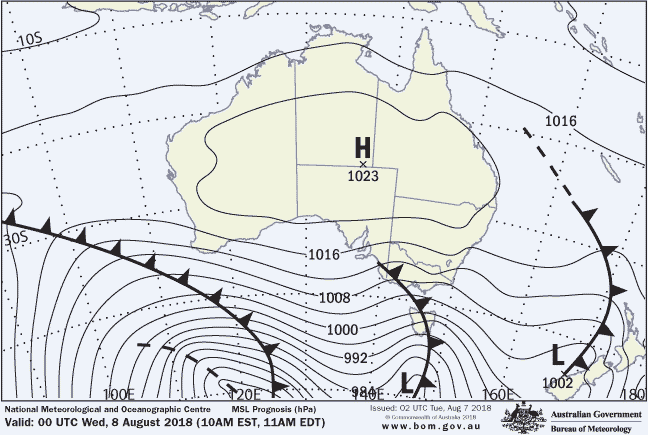 The second week of August brings with it a mixed bag filled with snow possibilities for Australia and New Zealand according to our resident meteorologist, Alex Zadnik, in his weekly report.

The snow base has cracked 1.5 metres at multiple Australian resorts, so make the most of it before warm and windy weather hits on Friday.

Gale-force winds are easing in New Zealand after today, so improving conditions for the end of this week with substantial snow falls possible on Tuesday.

For today (Wednesday 8th August) we have strong winds about with the passage of a cold front across southeastern Australia. Heavy snow showers are likely through the day but may ease during the afternoon.

A slight warming trend into the afternoon does bring the risk of wet weather for the lower runs of Victorian and NSW resorts but it could remain cold enough for snow.

Backcountry adventurers should check on the avalanche risk given the recent heavy snow falls.

A large high pressure system should bring more settled weather to the resorts for Thursday morning, with a temporary break in the recent strong winds and some blue sky about. The morning will be great on the groomers and there still should be some very good off piste skiing on the higher runs.

Temperatures will probably climb a little above zero during the afternoon and winds may start to increase again late in the day (particularly in Victoria), as a significant cold front over the Bight starts to make its presence felt.

Winds may reach gale-force at times on Friday, so some chairlifts may end up wind hold.

Melbourne has a forecast top of 20 degrees on this day, as an indicator of just how warm this airmass is for early August. Sydney is forecast to reach a spring like 25 degrees on the Saturday before the front arrives.

Colder air behind this front will start to push across Victorian resorts during the day on Saturday and reach NSW resorts by the evening. Winds will also back off a notch in the wake of the front but it still looks like a challenging day in this regard, particularly in NSW. A brief period of rain is possible ahead of the front but should quickly tend to snow during Saturday night.

Most resorts should wake up to 5-15 centimetres of fresh snow on Sunday morning, so this is looking like the best day of the weekend.

Southerly winds will remain fresh on Sunday but not be as extreme as previous days, while some blue sky is possible during the day at Hotham and Falls Creek.

A large high pressure system will bring blue skies to most resorts on Monday while winds should be relatively light. Therefore it’s looking like a great day for skiing and boarding, particularly on groomers.

Mild and windy weather may return midweek with the approach of another cold front but there is the chance of further snow falls in the following days. More on this in next week’s update. 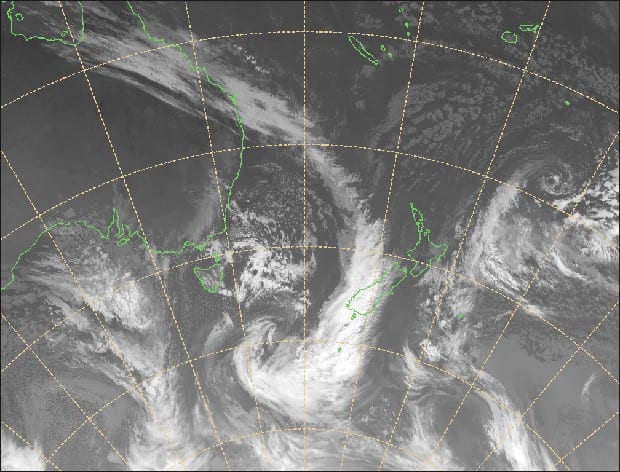 This frontal system will bring heavy precipitation to the North Island during Wednesday afternoon, with the snow level dropping to around 1700 metres at Ruapehu. Over 30 centimetres of fresh snow is likely by Thursday morning. As a side note, damage to the High Noon Express chairlift at Turoa is still being assessed following an avalanche on Monday.

A developing ridge of high pressure will help weather conditions to moderate across the North Island on Thursday, with snow showers and winds both easing. The Queenstown and Wanaka resorts will see a renewal of snow showers and fresh to strong winds during Thursday with the approach of a cold front from the west.

At this stage snow totals from Thursday into Friday will probably only amount to five centimetres or so, but the higher peaks of the Remarkables, Cardrona and Treble Cone could do a little better.

Cold winds and snow showers will spread north across the remainder of New Zealand on Friday, with falls of around five centimetres for Mt Hutt and Ruapehu. A developing high pressure system will bring easing winds and clearing skies to the Wanaka and Queenstown ski fields, so it looks like being a good day on the slopes.

This high pressure system will keep skies mostly dry across New Zealand on Saturday, although there could still be some lingering snow showers fro Ruapehu in the morning. Northwesterly winds may start to freshen across the South Island during Saturday but it looks like another good day in the Alps.

Strong to gale-force northerly winds are likely for the South Island during Sunday with the approach of a strong cold front from the west. Some rain showers are possible during the afternoon but more likely into the evening.

The North Island will remain under the influence of a high pressure centre, so Ruapehu will see relatively pleasant weather with mostly clear skies and lighter winds.

Snow showers should develop into Tuesday with the potential for heavier falls across the ski fields of both the North and South Islands. It is a little too early to be sure of totals with this next weather system, but it certainly holds promise for a boost to the snow base.