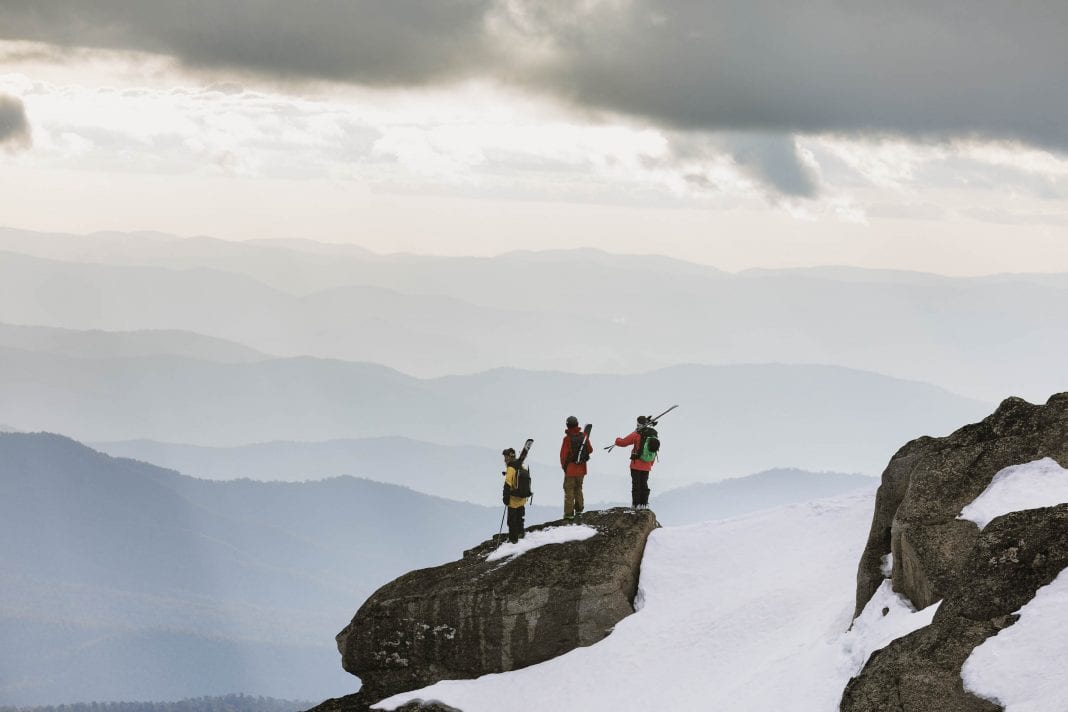 Making a film takes time. Making a ski film takes even more. The idea for even a short ski film may take years from first thought to first frame.

It was in the high peaks of Chamonix, a backcountry mecca for ski touring enthusiasts, that Australian film maker Lachlan Humphreys first heard about the Western Faces in Australia. While he was taking on the easily accessible yet high risk off-piste descents of the French Alps, his mates back home were going deeper and deeper into the Snowy Mountains on split board adventures and keeping him up to date with their adventures.

Chamonix may provide serious kudos, to those who survive, but Australia’s Western Faces provides gravitas to those who make these steep chutes and couloirs of variable snow their mission. Make a wrong move in Chamonix and rescue is close at hand, in the Western Faces of Australia, not so much.

“I clearly remember my first sight of the Western Faces. As I approached and peered over to get my first view of what lay beyond, I was gobsmacked. It’s a view you don’t expect to see in Australia” reminisced Humphreys.

“There is some crazy looking terrain out there – not only are the runs steep, but when you peer over the edge you often can’t see the bottom, let alone the next three meters that lays ahead. Having terrain like this at home in Australia was a complete surprise to me. It was something special and right away, I knew I wanted to capture it on film, that experience, that feeling you get while showcasing the natural beauty this place offers.”

It would be another five years before that film would enter pre-production and it would take a collaboration with long time outdoor film maker, Rob Norman, and support from The North Face to make it happen. Add five professional athletes and a trans Tasman rivalry for the film “hook” and the result is Western Faces, a 20 minute adventure film shot in spring 2019 and released this year.

The North Face are known globally for big expeditions caught on film but they had never made a film in Australia. The three day mission into Australia’s remote backcountry made sense for their first down under film foray.

“The North Face seem to attract the the real no-frills adventure enthusiasts in Australia and their product and equipment is second to none for harsh conditions that we would knew we would most likely be facing in the Main Range backcountry,” said Norman of the colab.

Two Wanaka locals made up Team New Zealand. Young gun, Fraser McDougall is what you’d call a multi talent – glider pilot, climber and professional skier. You may know his colleague, Hank Bilous, for spread eagling naked over Jackson Hole’s Corbett’s Couloir. We know him as a Freeride World Tour podium placer in his 2020 rookie season.

“All of our athletes were amazing out there. There was no attitude or bravado. Everyone worked as a team to get the job done and also managed to have a lot of fun while doing it” said Norman of the expedition.

“I find that with trips like these the personalities are just as important as the level of skill. When you’re stuck in unfavourable conditions and really having to work hard to earn your turns, a good sense of comradeship and fun make all the difference.”

“Tim Macartney-Snape was amazing to work with,” added Humphreys. “He has incredible knowledge about the mountains and his attitude was awesome. He was doing laps between shoots just to fit in some more vertical meters.”

“Tim’s knowlege of the backcountry is incredible” echoed Davis Meehan of her time in the backcountry battling 100km winds with the legend. “Having him off 100m in front of the pack shows that age truly is only a number!”

Macartney-Snape kept the crew entertained with yarns while sitting out the massive storm the team found themselves in and trying to stop the camp from blowing away. The 64 year old, in turn, found the team inspiring in individual ways.

“Hank for his studied nonchalance in shooting and just holding the boldest lines. Fraser for his clinical precision, Anna for her graceful style, Michaela for undaunted determination.”

It’s a sentiment echoed by McDougall who “can still envisage Tim Macartney-Snape standing outside his tent in 100km winds drenched head to toe with a massive smile on his face absolutely in his element, it’s pretty tough not to be inspired.”

Western Faces has showcased Australia’s adventure skiing to the world and has featured in the IF3 Festival in Montreal and the Backcountry Film Festival in Australia.

It’s hard to convince Kiwis who are traditionally loyal to their home terrain that Austalia has a thriving ski culture. The expedition certainly swayed Macdougall, for one.

“Australia has a mountain culture and scenery that’s uniquely its own, from the gum trees to the 100km/hr desert-sand wind storms to the legendary mountaineers and seasonaire skiers filling the bars and cafes in the township- it’s awesome.”

Film makers Humphreys and Norman aimed to create a film to ensure the rest of the world would get a glimpse of what’s on offer down under and make them appreciate their own easily accessed mountains more, and they’ve done just that.

**The Western Faces and SnowsBest acknowledge the First Nation people of the Snowy Mountains Country. The Walgal people and the Ngarigo people who are thought to have occupied the mountain range for 20,000 years with summer intertribal gatherings to feast on the Bogong Moth.

Your guide to 3 new Ikon Pass destinations in France, Utah and Idaho