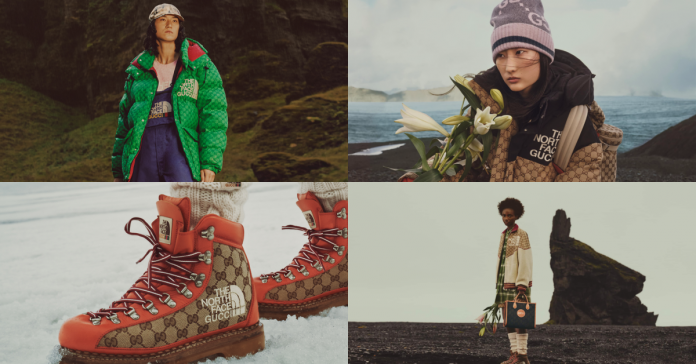 Sooooo our most loved adventure friends at The North Face have gone and hooked up with the swanky folks at Gucci, AGAIN. This time for the Chapter Two collection.

Who can forget the first collab last year shot in the mountains nor the funniest person in farshun, Fashion Critical, and her hilarious critique of the 70s inspired sustainable collection. If you missed it, you can view it here.

It would be rude not to ask her to do it again with this second collab, right?

The new farshun spread was shot in Iceland by French twins Jalan and Jibril Durimel and is all whimsical and intrepid, or so the blurb goes.

So in the name of good fun, enjoy.

FC: GUCCI and the North Face are at it again, collaborating for some nonsensical outdoor frolicking in un-nervingly expensive outerwear. 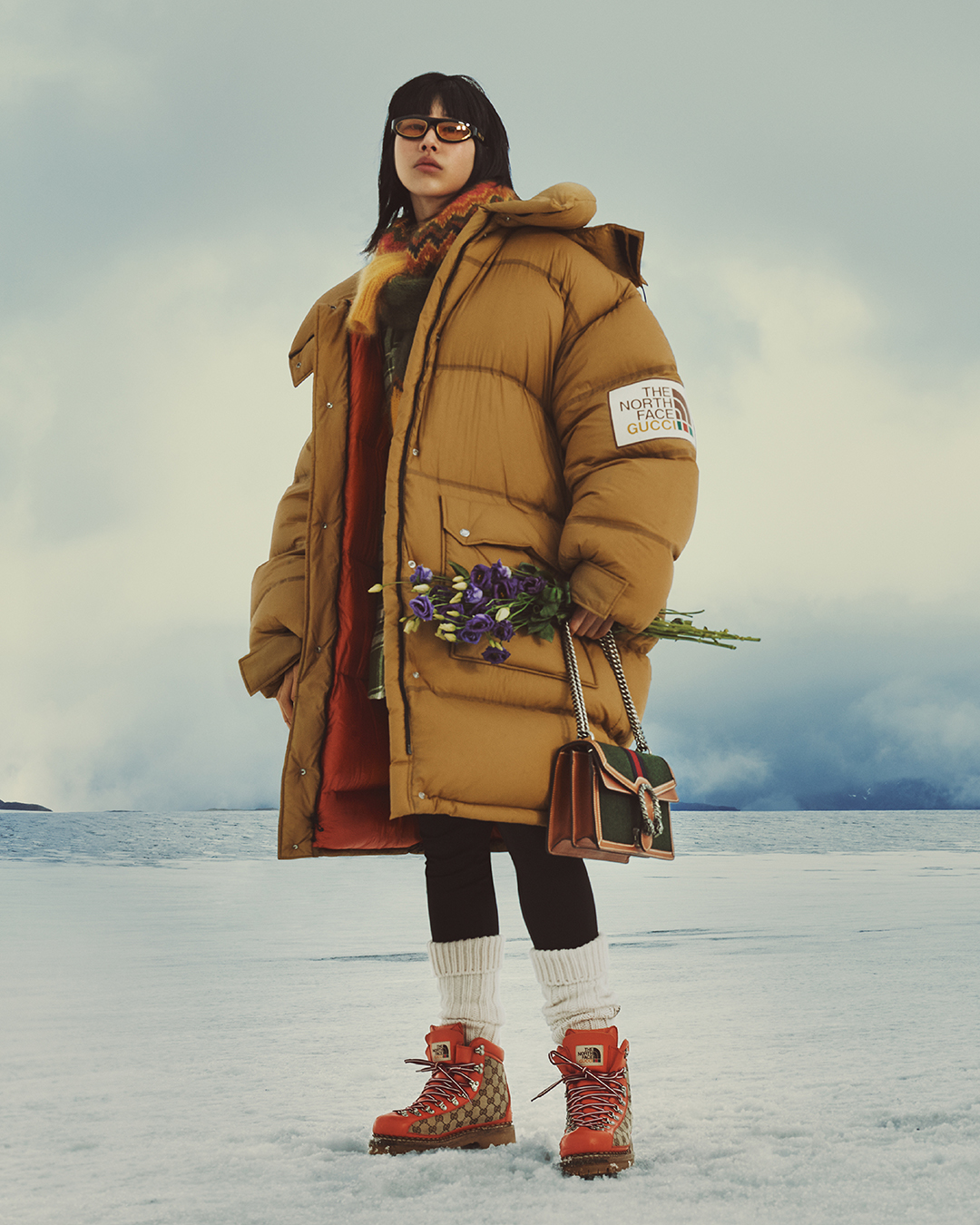 I call this “The Uncle Buck” special.  Wouldn’t Uncle Buck love this?  This puffer coat will expand your arms to the girth of a sumo wrestler in mere seconds.

While I find wearing any designer brand’s logo offensive, is it bad that I kinda like the boots? The delicate handbag adds a comical touch. 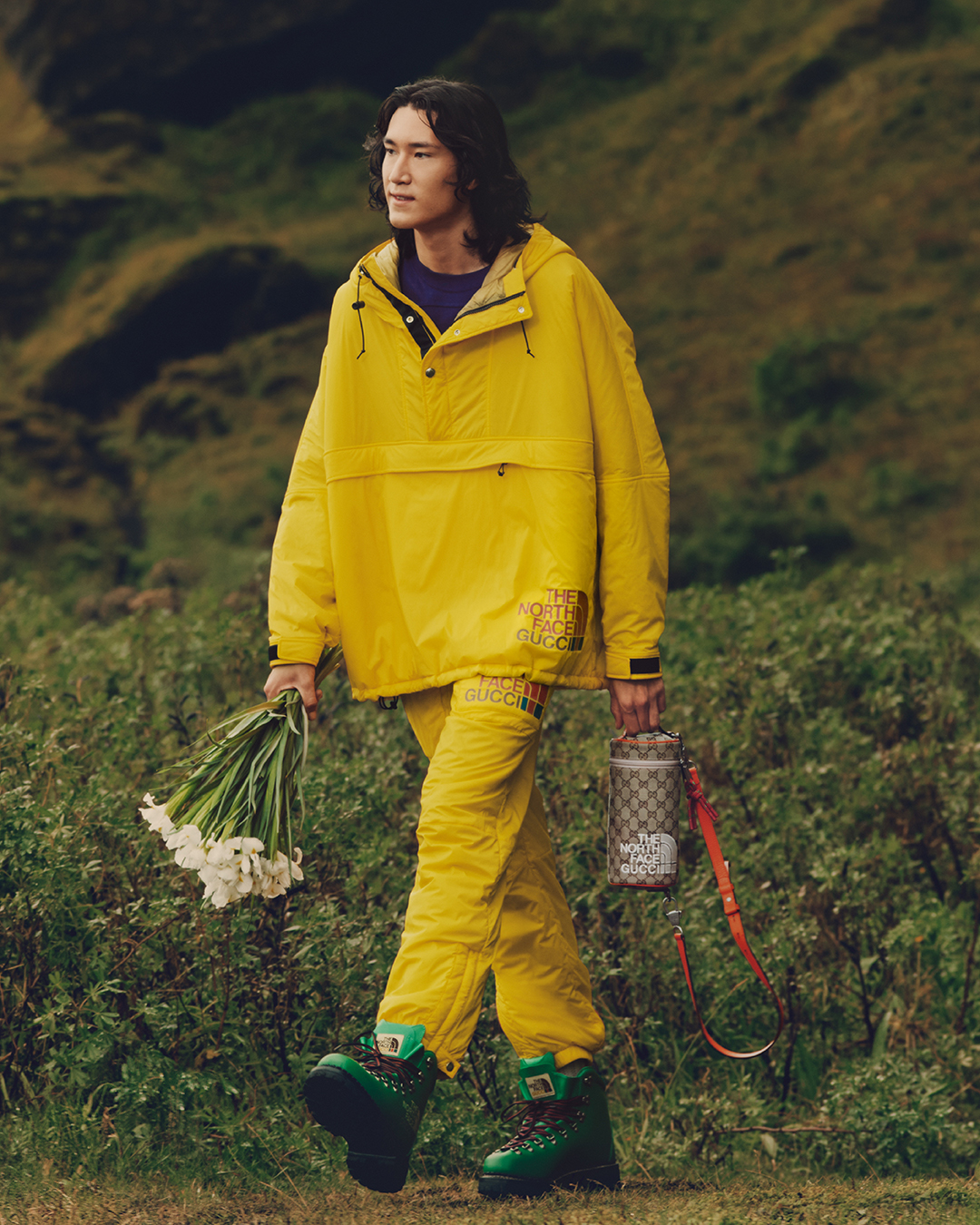 When you’re doing roadworks at 3pm, and shooting a GUCCI campaign at 3:01pm.  Don’t forget your water bottle insulator  too, for a mere $1,200USD because now even your water needs to be designer.

His green Gumby boots are fun!  And he looks like he’s feeling very optimistic about the recipient of his bouquet. 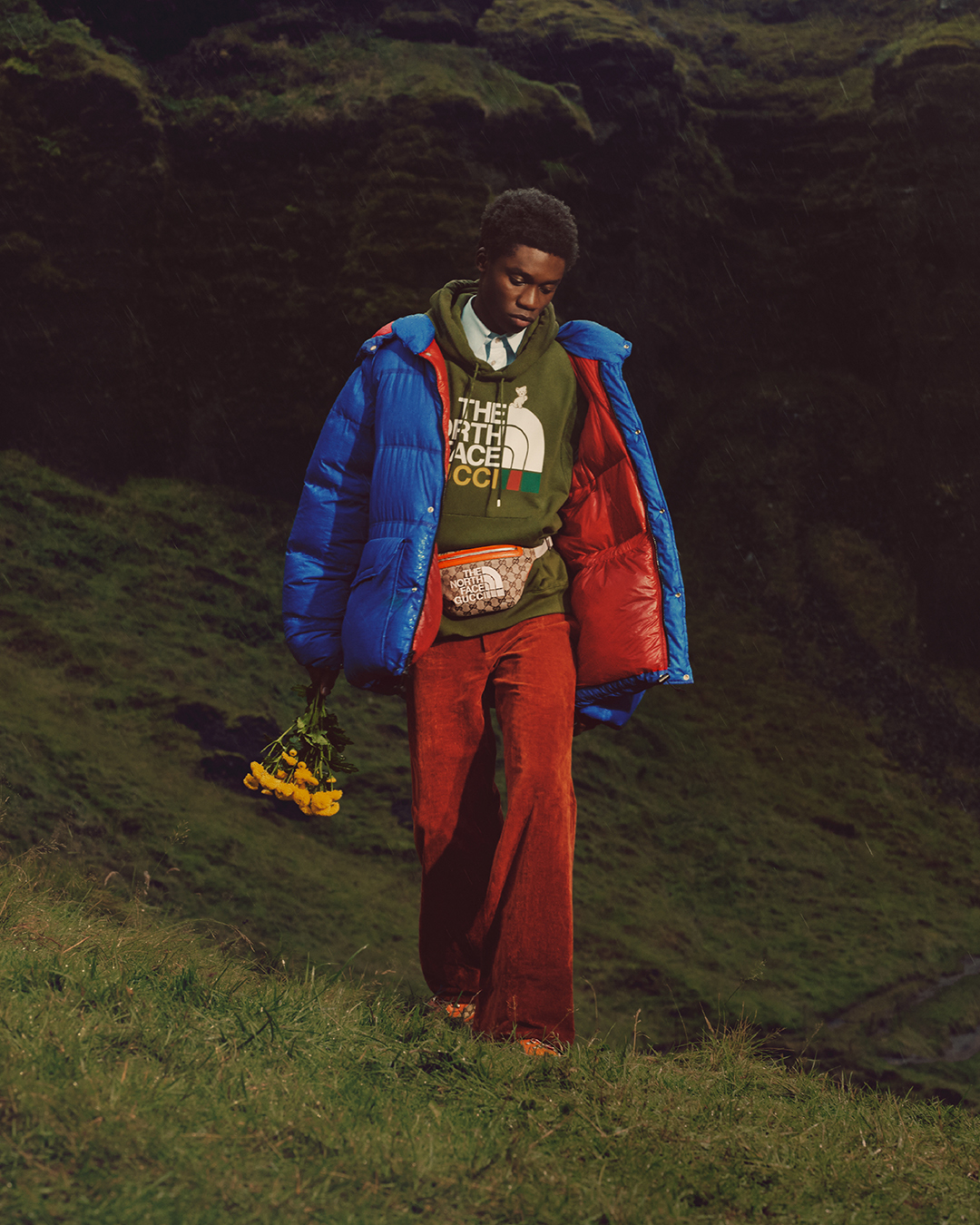 “You don’t bring me flowers…. or anything good to wear,” laments this male model as he glumly traverses the grassy slopes of Iceland. 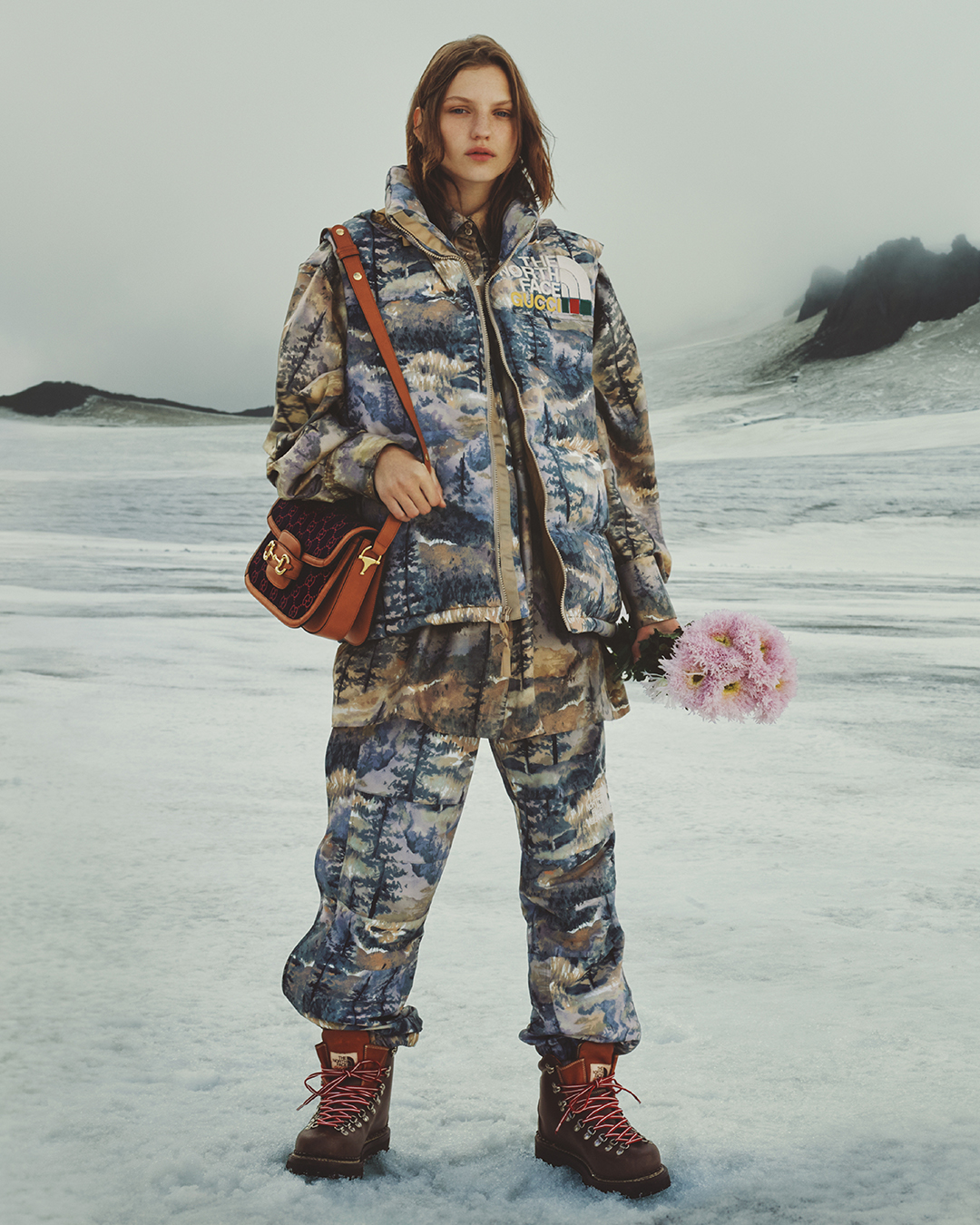 Okay I’m feeling this vibe!  It’s like snow camo but if you look closely, the print is a whimsical alpine setting.  Delightful!  If I was forced to choose one of these outfits, I would wear this one.  And leopard crawl around with a shotgun. Which is very American apparently. 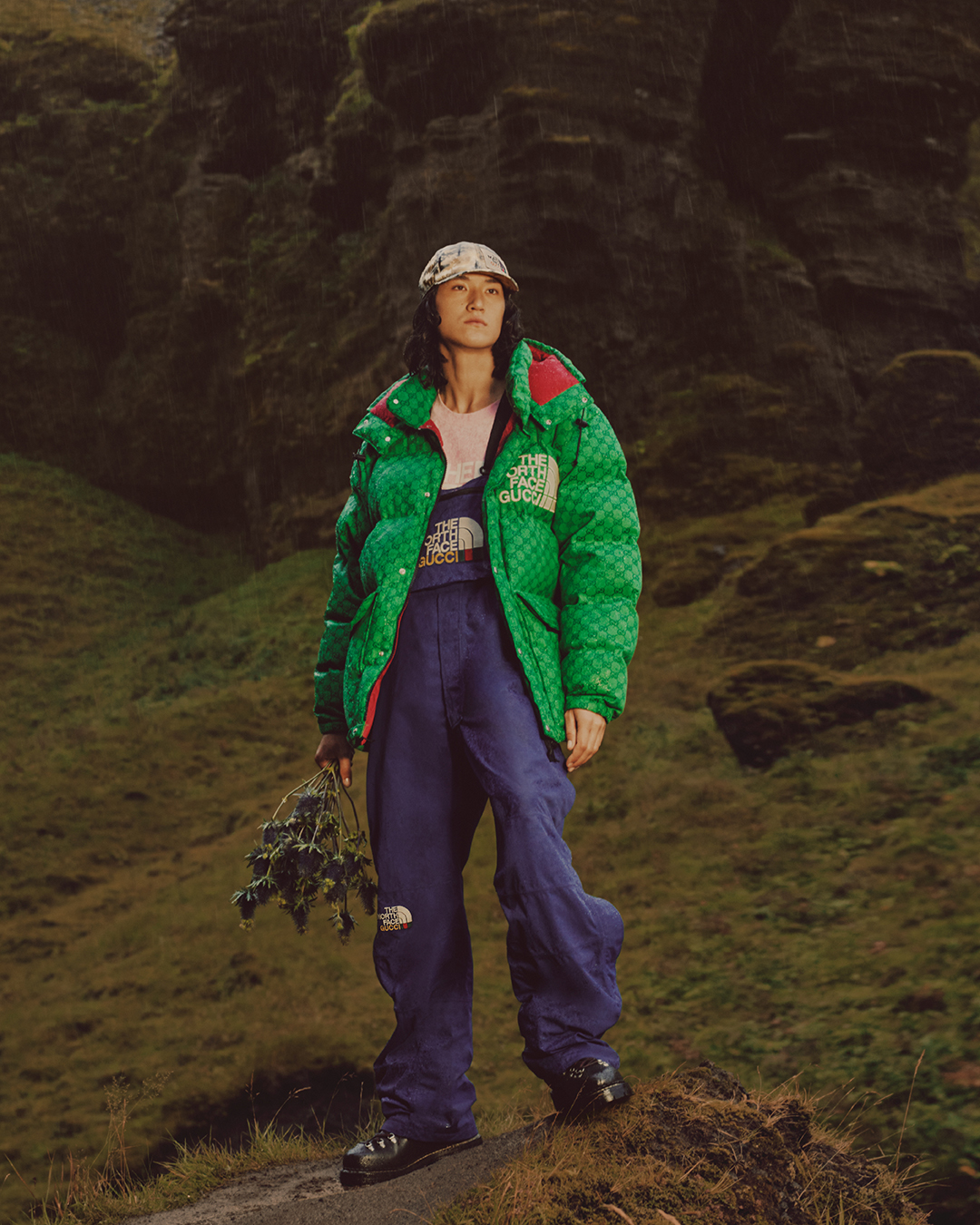 These Janitor’s overalls will set you back a cool few mortgage payments, leaving you feeling both working class and disgustingly extravagant all at once. The dead flowers reflect my feelings about the green parka. 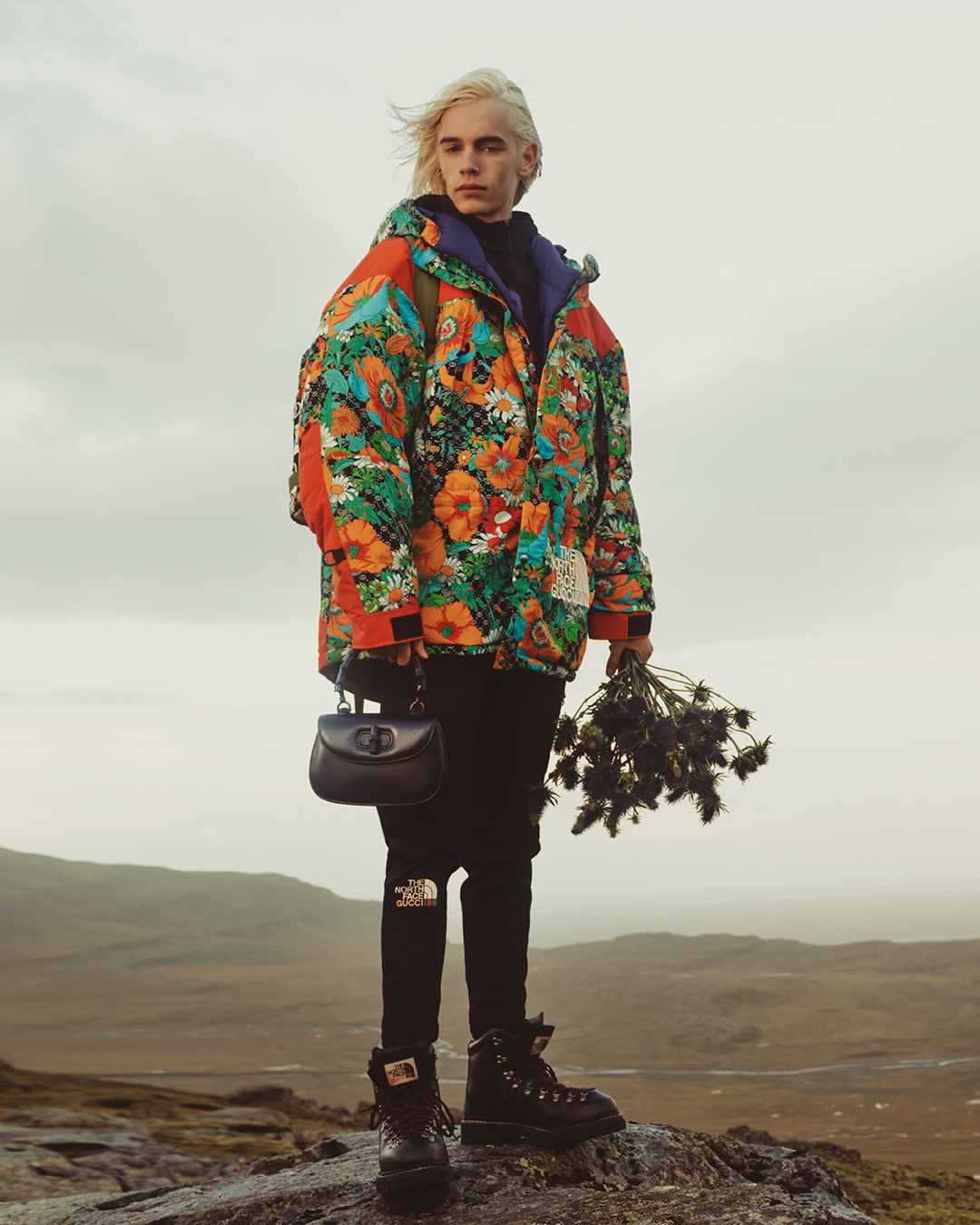 These flowers legit SUCK.  But no mores than the floral print on this jacket.  I feel like it’s something we would have seen on an occasional chair in the Golden Girls.

The teeny bag is good for carrying, um, a glove and one single breath mint. GUCCI is nothing if not practical. 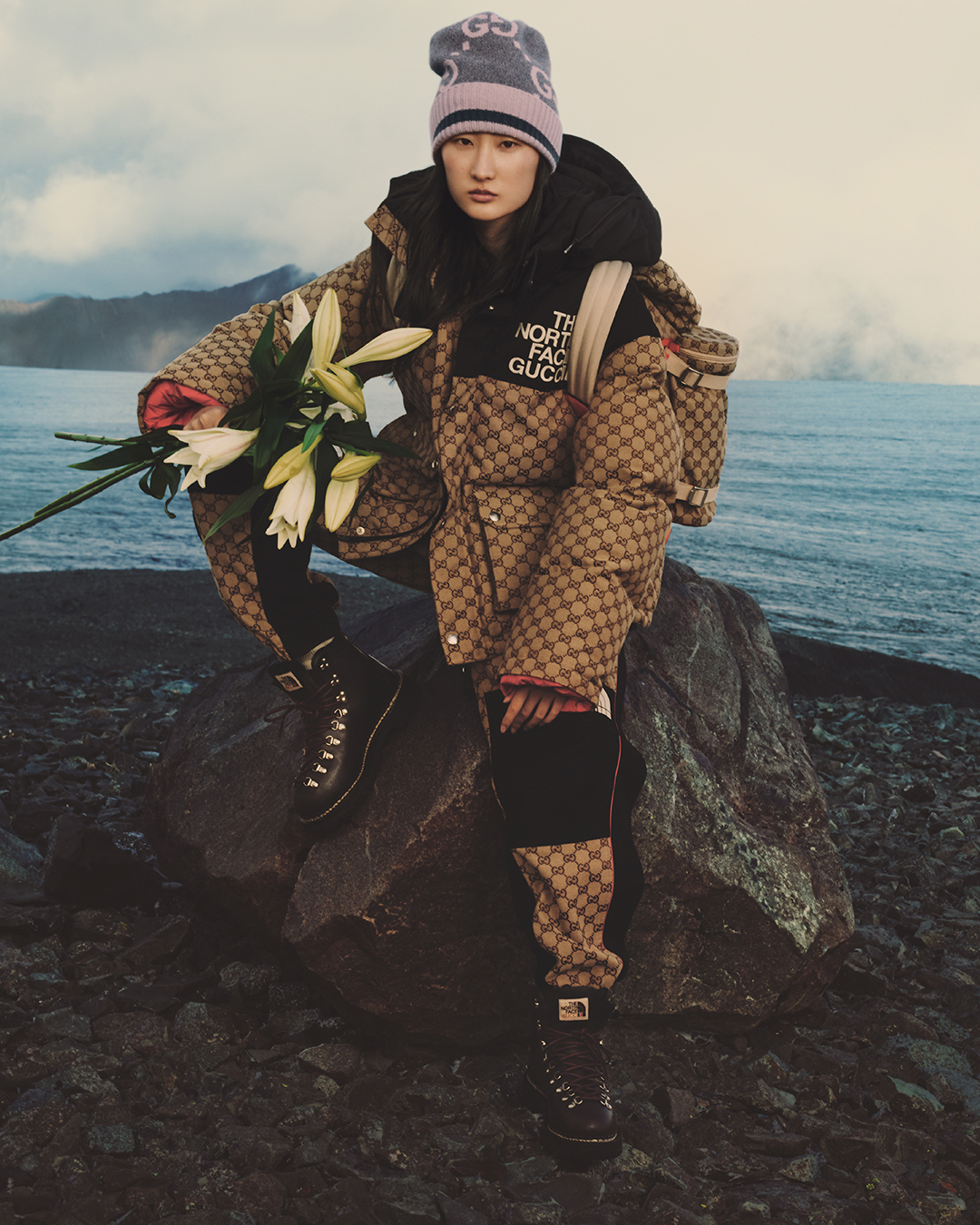 Despite my feelings re overt displays of designer logos, I think this gal looks sick!  10/10 would hang out with her on that perilous rocky outfall. 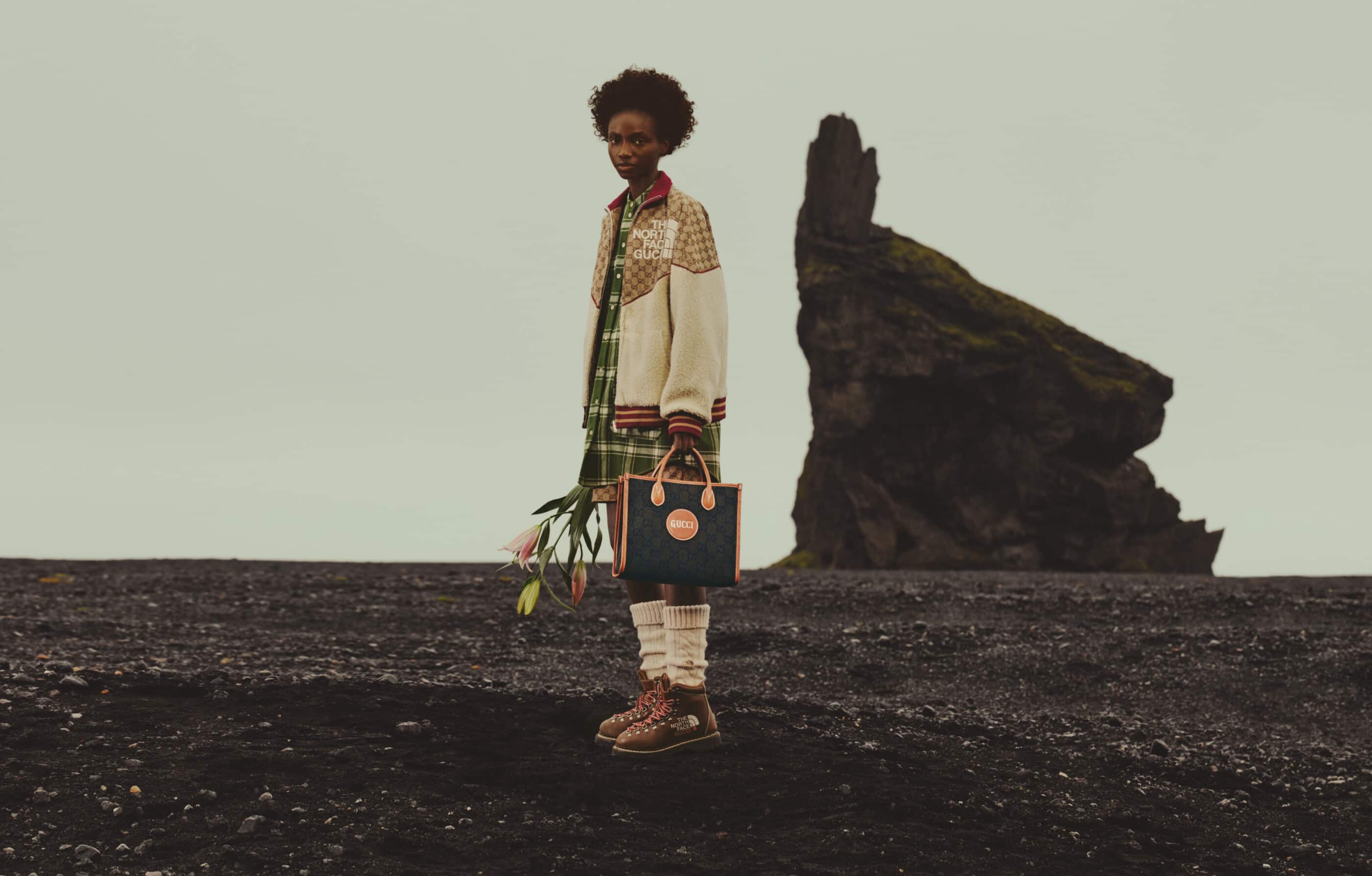 The cheese stands alone.  She looks humiliated and rightly so.  You finally score a major designer campaign and this is what you get to put in your portfolio?  #forshame 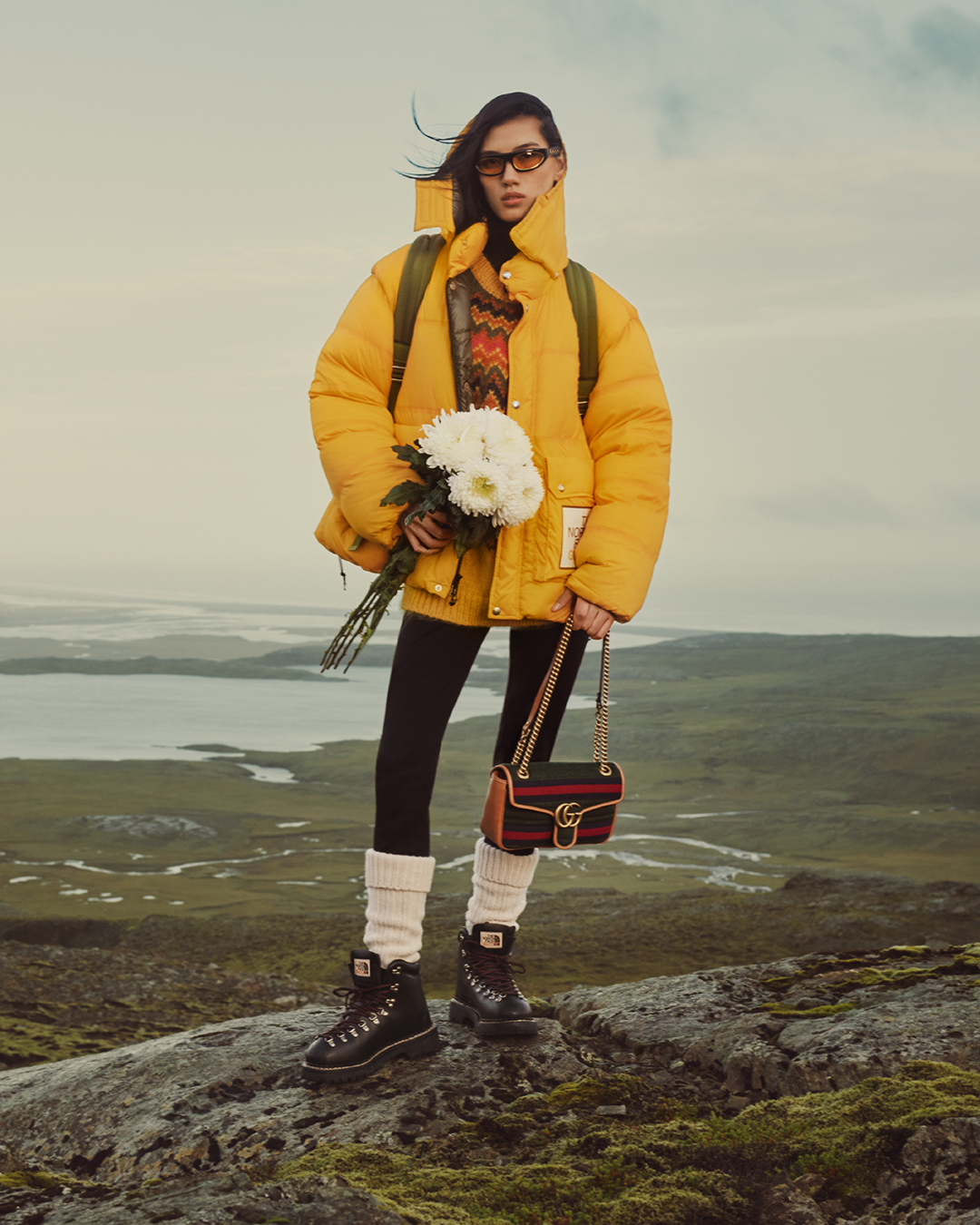 Well strike me down, I actually love this look!  It’s cute as a button!  A sunny yellow parka, a cute knit, some leg warmers and regular looking’ boots.  And another designer purse to carry the remnants of whatever doesn’t fit in your giant backpack. 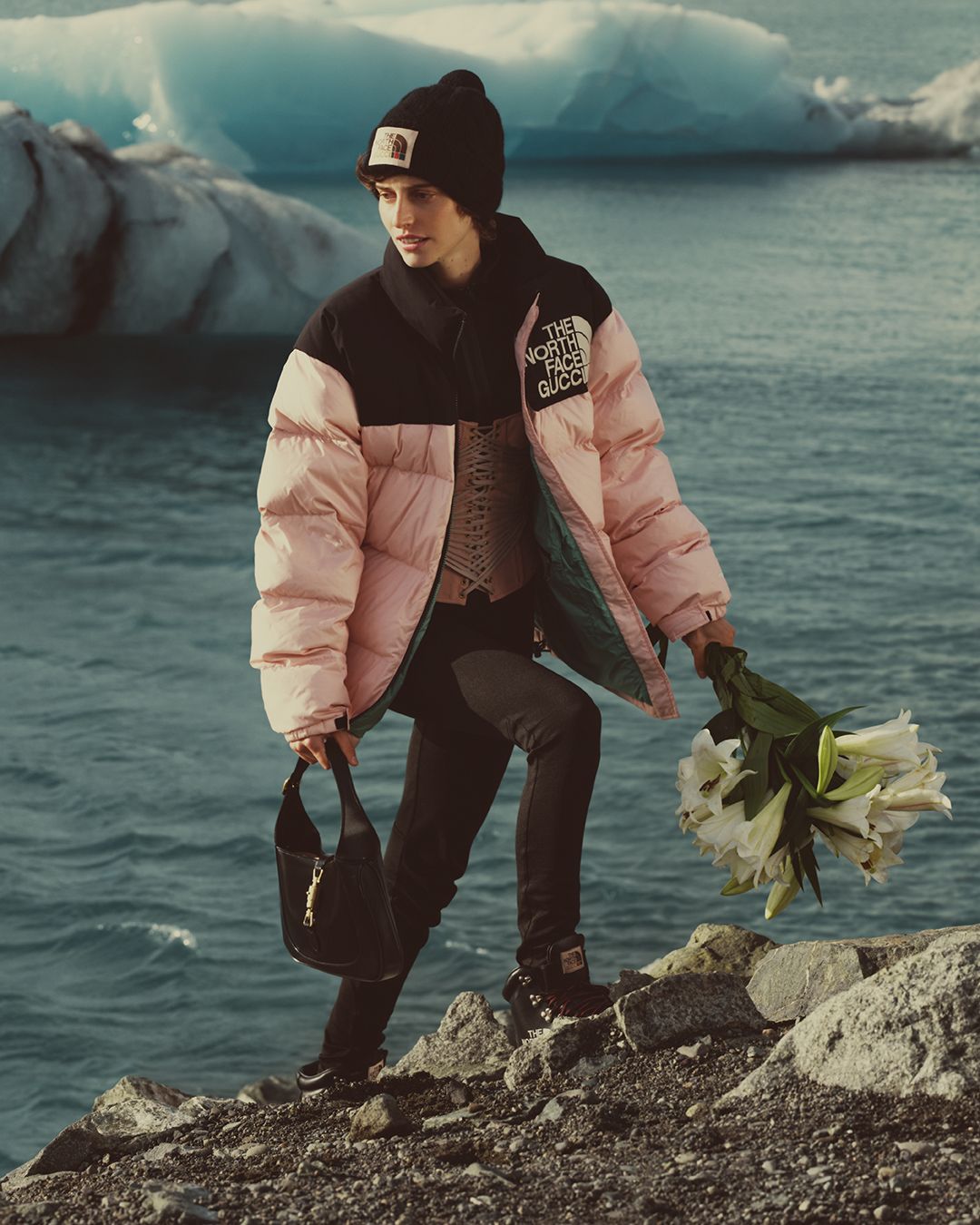 Yet another example of GUCCI proving that couture can also be practical and useful in adventure situations.  Take this lass, as she climbs a mountain with a bunch of lilies and a purse that MUST be hand-held, (leaving nary a claw free to stabilise herself should she slip on that worryingly loose gravel).

See how they’ve paired her otherwise normal attire with a corset?  Think of the core stability it would provide.  Sure, you can’t breathe and are already at high altitude. And sure, you’re in as much discomfort as am 18th century concubine, but at least you won’t be putting your lower back out.  Not on GUCCI’s watch! 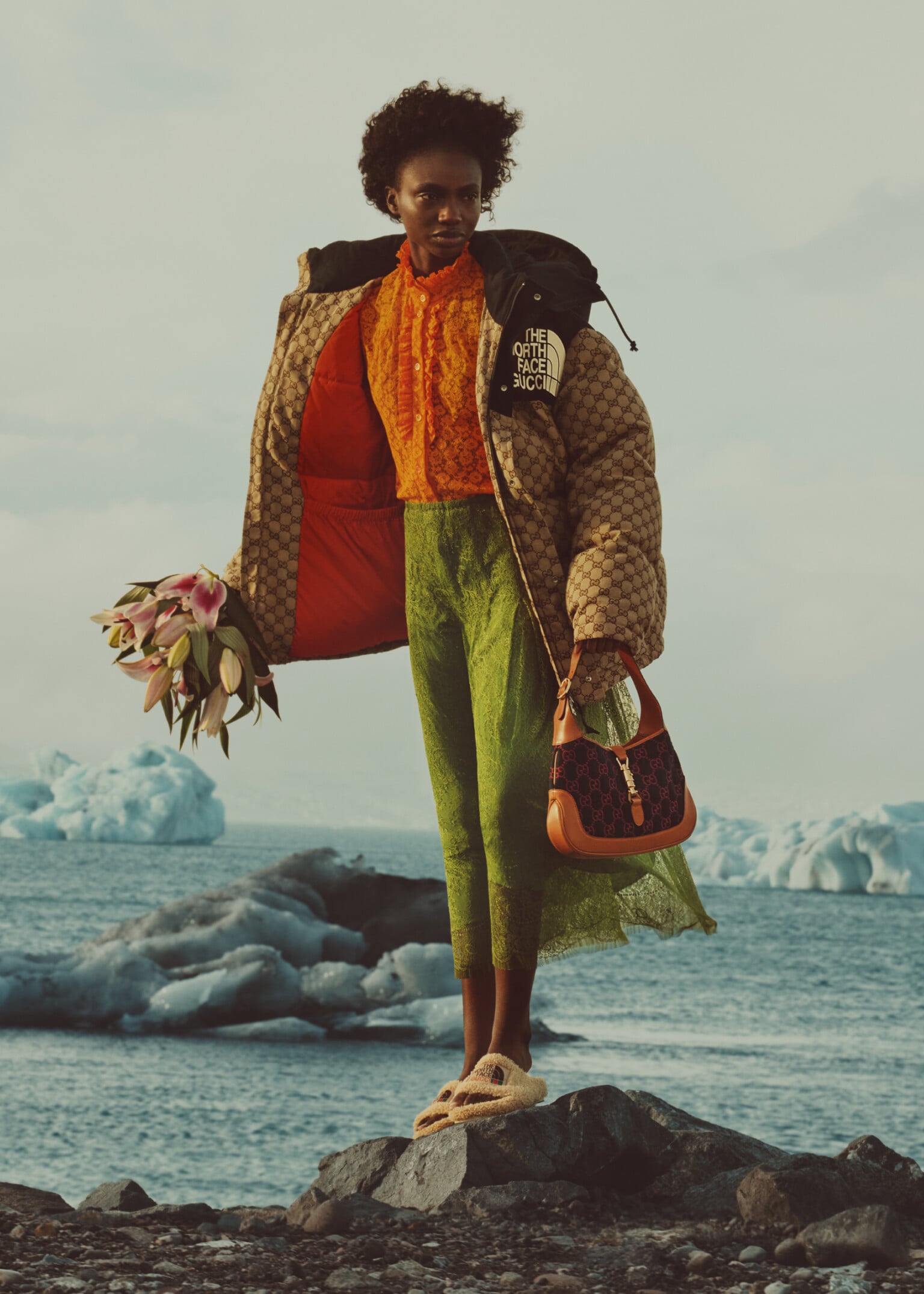 This orange and green are exact colours that your nasal mucous can turn under different viral and bacterial conditions, and thus, make perfect sense as a pairing.

I don’t even know how to admit this to you guys, but I don’t even hate this.  I think the more you look at this nonsense, the more normal it becomes. 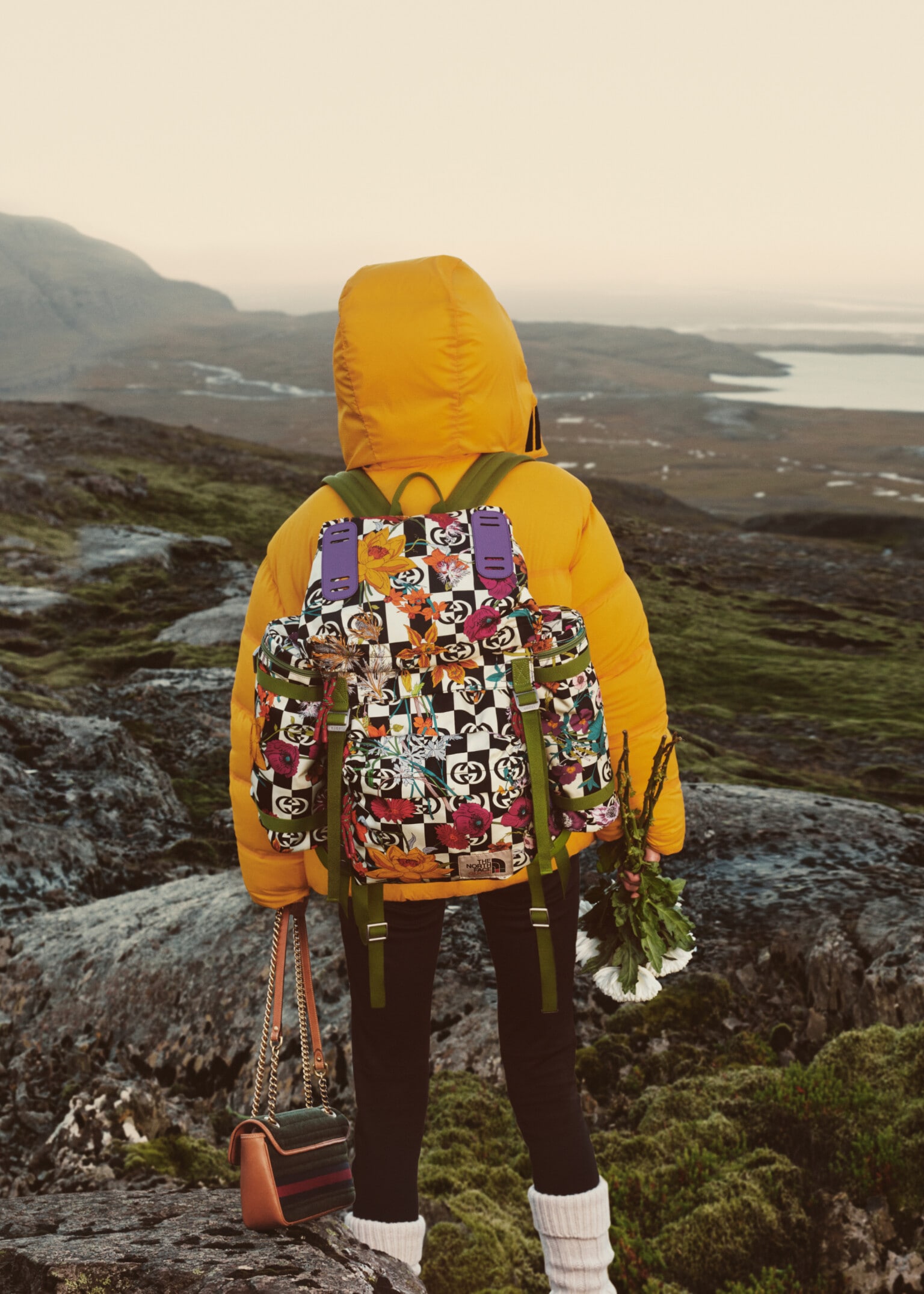 How apt that we finish off with this frivolous backpack and the fairly depressing view.  It summarises the nihilism with which you’ll contemplate your existence when you realise your life choices have lead you here:  Eleventy thousand dollars poorer, and yet, you still look like a clown. An outdoorsy clown though.

Love the collab? Check out the collection here.