Home fit2ski Skiing versus snowboarding, which is more dangerous? 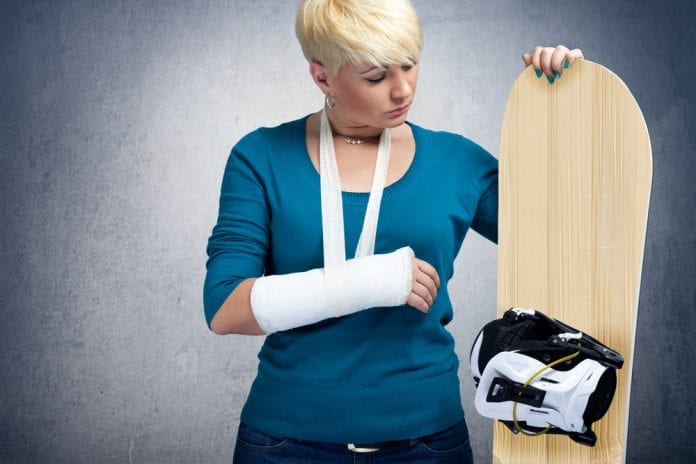 The rivalry between skiers and snowboarders is longstanding. We all love a good argument about ‘which is better’ – but reaching an agreeable conclusion on the topic is like trying to ski through a brick wall.

‘Which is more dangerous?’ is surely a more impartial debate. After all, there are injury statistics and medical experts who can attest to this kind of thing.

I tracked down those experts to help find the conclusive answer.

Skiing or snowboarding – which has more injuries?

The consensus seems to be that while snowboarding results in a greater number of injuries, the actual impact of (relatively fewer) skiing injuries can be far worse.

An analysis of ski and snowboarding injury records published in the American Journal of Sports medicine in 2012 found snowboarders studied in Vermont over 18 seasons from 1988 to 2006 had higher rates of injury.

Snowboarders enjoyed an average 345 days between injuries, compared to an average 400 days injury-free for skiers. According to the data, the most accident-prone people on the mountain were snowboarders that were young, inexperienced and female. Do what you will with that stat – but prepare to be sleeping on the couch if you use it in an argument against your shredder girlfriend.

Another study published in 2011 by the National Ski Areas Association (NSAA) in the US found that, although snowboarders were between 50% to 70% more likely to get injured, they were also about a third less likely to be killed on the slopes than skiers.

Skiing injuries were far more likely to be serious and deadly.

Skiers and snowboarders – who gets what injuries?

James Raphael, a radiographer of 10 years who spent the 2015 and 2016 seasons working in the medical centre at Thredbo, says he has seen “all sorts of injuries” from both skiing and snowboarding.

“Dislocated shoulders, hips and elbows, to compound fractures where the bone pierces the skin, legs, wrists, collar bones and more” Raphael says. He notes that skiing and snowboarding have typical injuries that are more common in each sport, due to the way a participant usually falls.

“For a skier, a torn ACL is definitely the most common injury” he says. “Broken wrists are the most common injury for snowboarders. I must have seen upwards of 200 broken wrists in one season alone. Lots of falling forwards and backwards onto outstretched hands sometimes even results in both wrists being broken. It’s unfortunate for the partner who possibly has to wipe the patient’s bum while they’re in casts.”

“While not exclusively the case, snowboarders are more prone to head and wrist injuries whereas skiers are more likely to suffer knee and shoulder problems” says McCutcheon.

What injuries are most common in Australia?

This study found 1,114 Australians were hospitalised due to injuries from snow sports in the 2011-2012 financial year – the equivalent of 803 people per 100,000 people who participated in snow sports. It also noted the most common way to get hospitalised on snow was with a simple fall.

Despite the familiar story that we’ve all heard from skiers about some hoodlum snowboarder careening into them at high speed, ‘Contact with another person’ caused relatively few hospitalisations.

The other fascinating revelation in this study was that city kids were far more likely to get injured than skiers or snowboarders who hailed from country towns and remote areas. The rate of injury among city folks at the snow was about 7 per 100,000 city dwellers – compared to 3 or 4 out of every 100,000 outer regional and remote Australians who went skiing or snowboarding.

What about terrain parks and off-piste?

If you’re wondering about injuries sustained from off-piste and backcountry skiing, you may have to keep wondering. Comprehensive statistics don’t really exist because it’s impossible to know how many people are skiing off-piste or in the backcountry at any one time.

A six-year study of the largest ski resort in Finland, published in 2014, found just three per cent of recorded injuries occurred in off-piste areas, but there was no data to show what percentage of the total chose to ski off-piste. The injury rate could be so low simply because only three per cent of skiers and snowboarders actually ventured off the resort map.

According to the Colorado Avalanche Information Center, 11 skiers and snowboarders were killed in avalanches in the USA in the 2017-2018 season. This fatality rate has remained relatively stable over the past decade despite most indications showing backcountry skier numbers have increased dramatically in recent years.

SnowSports Industries America reported a 200 per cent year-on-year growth in sales of backcountry touring equipment between 2016-2017. It could indicate better safety awareness among skiers, but equally could be attributed to improved communications, rescue equipment and avalanche prevention tactics among ski patrollers.

One thing all the experts seem to agree on is the danger factor in terrain parks – for both skiing and snowboarding. A study published in the Journal of Injury Prevention in 2010 found terrain park injuries were far more likely to be severe and involve head or spinal injuries than injuries sustained on standard runs.

Injuries were also more common among young men than women (girls – your turn for argument ammo). Most were aged 13-24 years and had a level of confidence that perhaps exceeded their abilities: they rated themselves as intermediates and experts rather than beginners.

It’s why radiographer Raphael has changed his personal use of terrain parks since working at Thredbo’s medical centre.

“I no longer use them” Raphael says. “Some of the worst injuries I’ve seen have been from both inexperienced and experienced riders hitting the jumps. From spinal fractures to multi-traumas with fractured pelvises and upper limbs mixed together.”

The takeaway? Go skiing if you like your wrists injury-free, choose snowboarding if you’d prefer to keep your knees intact, and only head to the backcountry with the proper equipment and training.

Oh, and don’t hit the biggest jump in the terrain park unless you really know what you’re doing (not just hoping you do).