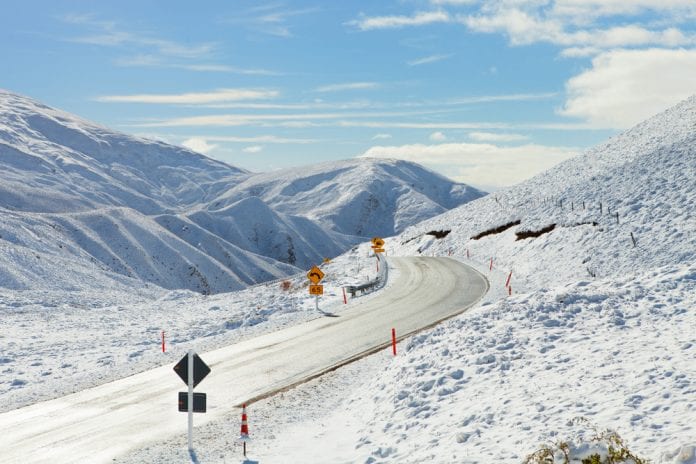 Now the resorts have all opened, the winter solstice has passed and we settle into the ski and snowboard season ahead, we look at the week of snow forecast ahead. It’s a mix of rain and snow ahead for Australia and New Zealand, the question is how much? Meteorologist Alex Zadnik reports.

After the big snowfalls of last week, temperatures have remained cold enough to maintain a good cover on the groomed runs. Night time temperatures have also been conducive for snow-making activities at the resorts.
A developing low pressure trough over eastern Australia is expected to bring a mix of rain and snow to the New South Wales resorts during Wednesday night and Thursday. Snow may fall down to around 1800 metres, with rain a risk on the lower slopes.
One to five centimetres of fresh snow is likely on the upper slopes of Thredbo and Perisher, but there is an outside chance of a little bit more. Most precipitation will stay north of the border, so the Victorian resorts should remain mostly dry. 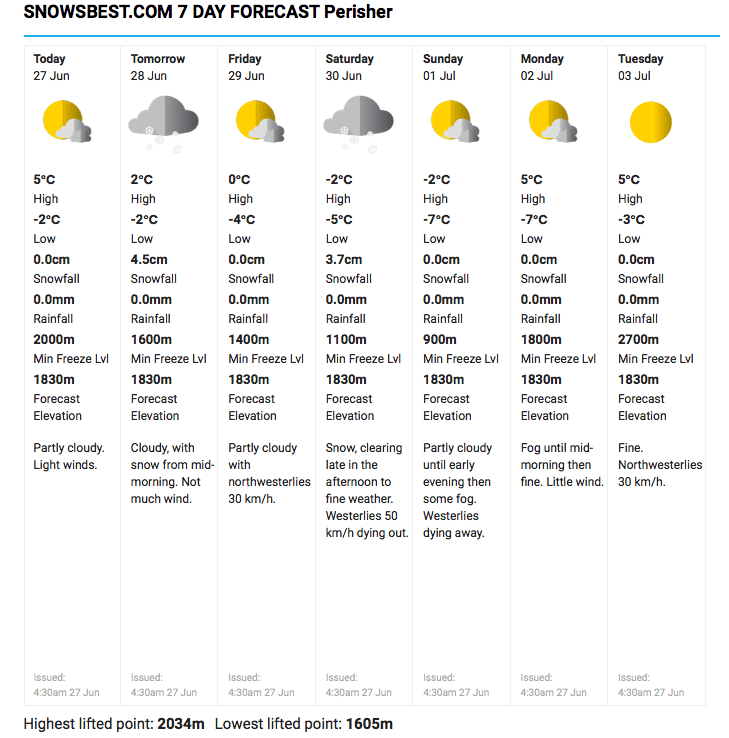 A better looking cold front is due across southeastern Australia from Friday evening into Saturday. Fairly widespread five centimetre falls are likely through this period, although Buller, Falls and Hotham could pick up a little more.
Sunday is probably the pick of the weekend following this fresh snow. A building ridge of high pressure should bring some improvement in weather conditions on this day, although there will probably still be some cloud around as the prevailing airflow remains from a general westerly direction.
This newly established ridge of high pressure looks like keeping skies clear and dry through the first half of next week, so it looks like we are a some way off seeing a big top up of natural snow. The longer range charts are hinting at a renewal of frontal activity from July 5 onwards, but more on this next week.

Winter arrived in full force this week, with low level snow falling across New Zealand. Sleet was reported in Dunedin on Tuesday, while on the North Island the Desert Road was closed.
A bitterly cold southwesterly airflow brought over 40 centimetres of fresh snow to Coronet Peak and the Remarkables between Sunday and Wednesday morning, while Ruapehu resorts picked up approximately 25 centimetres through Tuesday.
A large high pressure system is now edging towards New Zealand from the Tasman Sea, helping winds to ease and skies to clear.  Therefore it’s looking like a great week to hit the slopes.
Weather conditions will deteriorate again this weekend as another frontal system approaches from the west. This system looks like generating some rain at first during Saturday but this should tend to snow on Sunday as colder air arrives.
10 to 20 centimetres of fresh snow is possible from Sunday into Monday, with the Queenstown and Wanaka resorts best placed to receive the coldest and driest snow. Monday and Tuesday look like being good days for hitting the mountains around Wanaka and Queenstown as winds ease in the wake of the front. 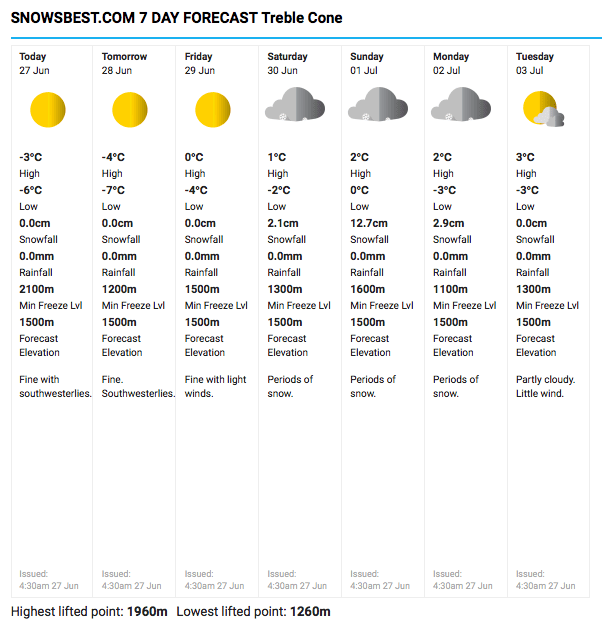 A second cold front may bring further snowfalls to the South Island during the second half of next week but it’s a little too early to be sure of this. Keep an eye on the Snowsbest 7-day forecast over coming days as the computer modelling firms up on the outlook for the second half of next week.
Enjoy the fresh snow in the meantime.
Check in weekly with Alex Zadnik’s Snow Forecast blog here and join our Miss Snow It All Australia Deals group here and our Miss Snow It All New Zealand deals group here.
Share with your crew
15FacebookTwitterLinkedInEmailPinterest
15
SHARES