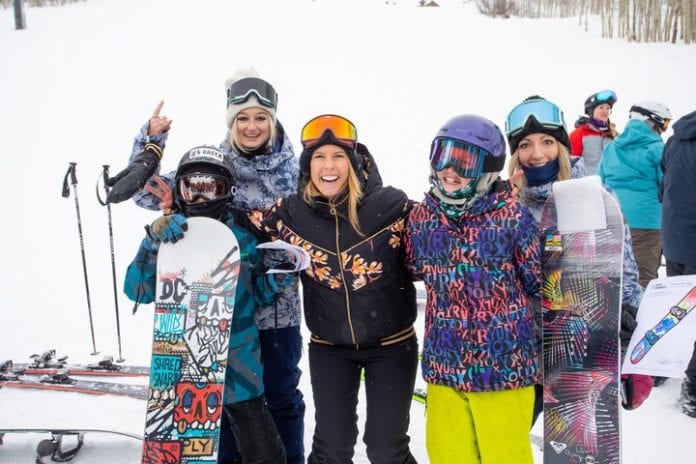 There was no doubt who was the most popular Australian in Aspen Snowmass this past weekend, with over fifty 7 – 17 year-olds signing up to the first international Torah Bright Mini Shred at Lowdown Park at Snowmass.

The gold and silver  Olympic medallist and five-time X Games Aspen medallist started her free clinics in Thredbo five years ago, but this is the first time she’s brought the Torah Bright Mini Shred overseas.

“The Mini Shred for me is all about the grassroots, giving back, but it’s also about connecting them as a community and maybe making new friends and learning new tricks” said Bright.

“The Mini Shred is making sure they get a start in the right place, it’s about the joy and the fun.”

This isn’t the only way Bright is giving back while in the resort, either. Originally hailing from Cooma, she’s been keen to be involved in fire fundraising and teamed up with the Australian Accountants, Lawyers and Directors Conference (AALDC) in Aspen, to offer a half day “Ride with Torah” as a silent auction prize.

Another half day was added after the auction closed when another conference delegate offered to match the final dollar amount. These funds will go to the Australia Wildfire Relief Fund set up by the Aspen Skiing Company, which is collecting donations though January 26 and will match the first US$12,500 donated.

Donations can be made here.

It’s been an action-packed Torah Week – apart from the Mini Shred and two Ride with Torah donations, Bright has visited the Aspen Youth Centre to talk with after-school care fourth graders and up, has featured in the Aspen Times and chatted with TV Aspen 82.

But it is while the resort is full of holidaying Australians that Bright’s bushfire efforts are making the sweetest of  tracks.

“Livelihoods are all being lost and absolutely devastated. To see the Aspen community, and the U.S. community, want to support and raise some funds is pretty beautiful, to be honest” said Bright.