Home Guest blogger When snowboarding gets you through the tough times 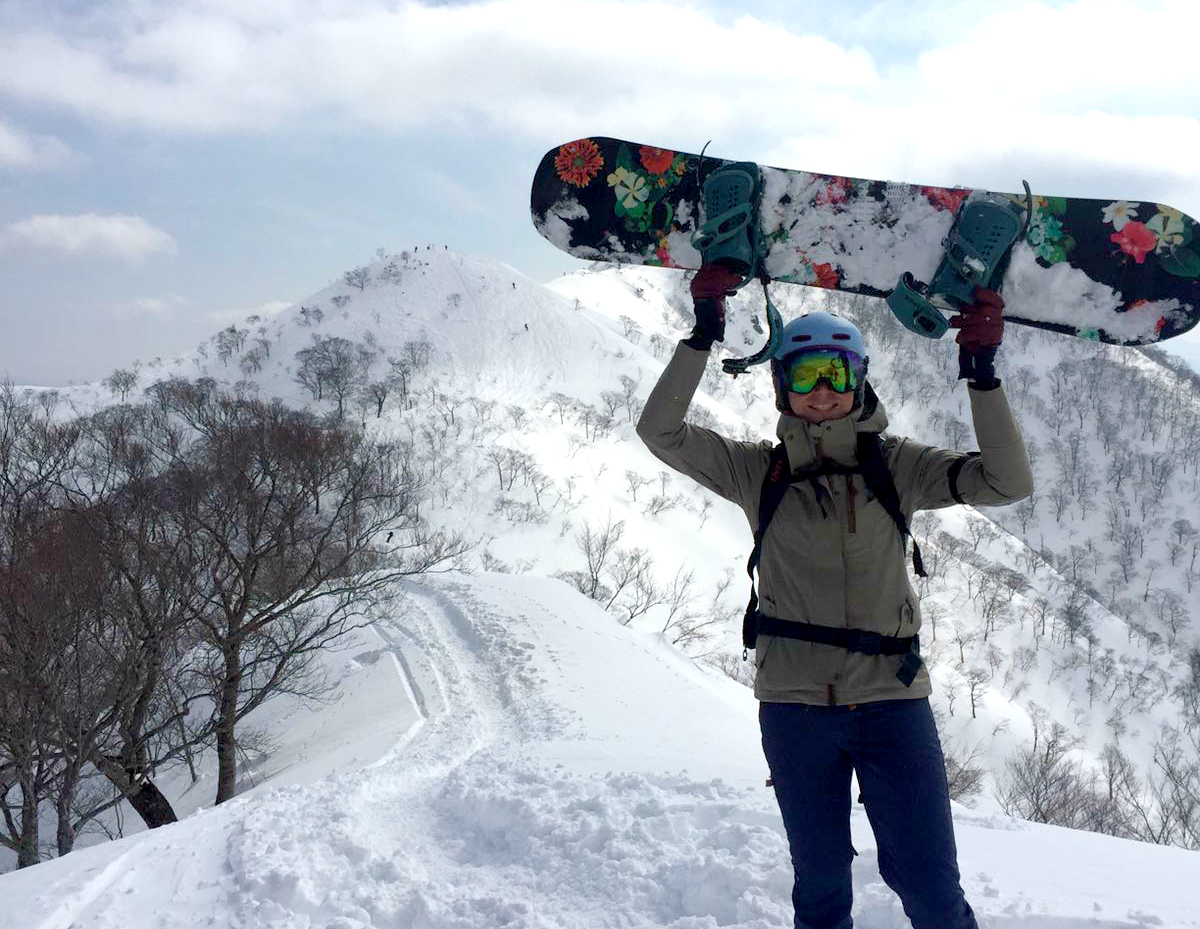 How snowboarding got one transgender woman through the toughest times of her life. Dale Sheridan shares her story with SnowsBest.com.

Throughout the 34 years of my life, I can’t think of a point in time where I haven’t questioned or felt uncomfortable about my gender identity. One wouldn’t normally associate the terms ‘transgender’ and ‘snowboarding’, but snowboarding has both marked the most pivotal turning points in my life and helped shape who I am today. This is my story.

I am sitting in the lounge at Geneva Airport after a snowboarding trip to the French Alps. It’s 2014 and Piers Morgan is on the TV interviewing Janet Mock, an American author who transitioned from male to female.  Watching this interview, I had an instant and heartbreaking realisation that my feelings of being the wrong gender wouldn’t go away and that I needed to transition if I was going to live my true life.

Almost a year later I took leave from my government job in Canberra and went trekking to Everest Base camp to contemplate what this all meant for me. I had been taking female hormones for about 7 months by that time and was sitting firmly in that space in-between genders that was awkward and uncomfortable for me.  Since I was on leave from work, I figured I’d pass the time by heading to Japan for a snowboarding trip.

When you’re transitioning from one gender to the other there is no rulebook or pre-defined path to follow.  It’s not like recovering from a broken leg where you have to rest and undergo rehab in order for your leg to heal; a gender transition (well for me anyway) involved a physical change, a social change and internal psychological change in how I viewed myself.

Looking back I can’t believe I had the courage to go snowboarding in Japan six weeks after I started presenting as female.

I grossly underestimated the difficulty and personal strength it would take to survive a gender transition, but I didn’t have the luxury of ‘choice’ in this matter.

One has to be willing to lose everything and everyone as a result of transitioning to live in the correct gender. I lost my marriage, family members and many friends.

I also had to withstand uncomfortable stares, mis-gendering and abuse from random strangers in the street.  The simple exercise of going to the shops to get groceries had become a major ordeal that resulted in stress and anxiety from stares and comments I would receive from other shoppers.

I felt so isolated and dejected, and couldn’t yet see how I would ever be accepted in society as a woman.  The isolation was so excruciatingly painful, it felt like it had manifested into physical pain.

I had been snowboarding from about the age of 12, and I had always found it incredibly cathartic and liberating.  Racing down the slopes, tearing through the powder and dodging trees, over the moguls and the sneaky jumps that form on the side of a run – that is my happy place.

In my state of physical pain from the anxiety and loneliness, I hoped that the therapeutic effect from snowboarding in the fresh mountain air would be the perfect treatment, and if nothing else, it would give me a pretty good reason to get out of bed each morning.

I changed the gender marker in my passport, bought new women’s snowboarding gear, booked my flights and accommodation – and I was off to Japan.

However, I didn’t get very far before the wheels started falling off.  Straight up I had a disastrous encounter with the flight attendant.  As the flight was slightly delayed, the flight attendant was coming through the cabin to introduce herself to each passenger and apologise for the delay.  However, when she got to me she couldn’t work out whether to use ‘Mr’ or ‘Ms’, stumbling over her words for what seemed like an eternity for both of us, despite holding a passenger manifest that clearly stated ‘Ms’ before my name.

Needless to say, much embarrassment ensued.  I felt so ashamed and just wanted to strap on a parachute and get out of there as quick as I could. The 10 hours of flight time up to Japan could not pass quick enough.

I was also really nervous about potential issues with Japanese Customs due to being transgender. Thankfully, I survived the flight and my passport was stamped – I had made it.

I headed out to Hakuba to a little family run pension.  They were so lovely and accommodating, but weren’t quite sure what pronouns to use, so defaulted to using male pronouns much to my disappointment. Other guests were also using male pronouns, despite my best efforts to correct them.

I was getting pretty down about the fact that I wasn’t ‘passing’ as female. I got so depressed I couldn’t bring myself to even sit in the communal lounge area out of fear of someone using the wrong pronoun or reacting negatively to the fact I was transgender.  I spent most nights alone crying in my room, and it got to the point where I was seriously considering paying an exorbitant amount of money to change my flights and head home early.

However I pushed on. Being the powderhound I am, I just couldn’t bring myself to run away from the unrelenting powder just puking down every day. I’d never snowboarded in snow so light or deep. Carving a perfect turn in the deep untracked powder was such a delight. For a brief moment my worries would disappear as I relished in the perfect powder wake that would blast up into my face and behind me.

I decided to stay on in Japan and after a week I moved onto my second destination, Madarao. Again, I stayed at a small Japanese family run pension. One night I managed to pluck up the courage to sit in the lounge area and talk to a group of fellow Aussies who looked about the same age as me.

I was pretty scarred from my experience the previous week in Hakuba, and was praying they would accept me. After chatting for a while about our respective snowboarding adventures in Australia and abroad, they extended an invitation to snowboard with them the next day. This continued for the next 5 days. In fact, I continued to snowboard with some these new friends in the subsequent Australian and Japanese winters.

They didn’t care that I was transgender and just accepted me at face value. They just saw me as a snowboarder who could shred and who was silly enough to attempt the odd trick or impossible jump. I was so relieved. I even shed a few tears of relief.

It was the first time since losing so many people in my life that I’d actually gained some friends as my true self. I had endured painful and heartbreaking moments coming out to friends and family, and dealing with the radio silence that would ultimately follow.  I didn’t think I was worthy of friendship or love. But I was able to forge these friendships though a mutual love of snowboarding.

That snowboarding trip was such a turning point in my life and kick started the beginning of my passage to self-acceptance, self-love and confidence in myself as a woman. It has taken quite a bit of time and a truck load of tears to get to a place where I am finally happy with the person that I am and where I’m not afraid of putting myself out there to meet new people.

Snowboarding that winter in Japan started that process and provided me with a common ground that enabled me to humanise myself to others. I often find for many people I am the first transgender person they have ever met, and often have to undo the perceptions they have about the transgender community – which is achieved by simply existing as myself.

I have since developed other great friendships through my love of snowboarding from my subsequent trips to Japan and in Australia. I even befriended another transgender snowboarder – and here’s me thinking I was the only one!

My recent trip to Japan was such a contrast. People used she and her without being prompted and my Japanese backcountry guide exclaimed ‘good girl!’ when I made it down the piste in one piece.

Most people wouldn’t consider this remarkable at all, as gender is usually a given and not an issue for most people.

However, for me it was incredibly affirming.  I was elated by the fact that I was accepted as a woman, and it resulted in one of the best holidays I’ve had.

Now I can’t wait to plan my next snowboarding trip, and look forward to the people I will meet and the adventures I will have.  Before I started my transition I thought about the most important things in my life that I couldn’t cope with losing.  I ended up losing most of those things, but life still goes on and the sky hasn’t fallen in.

After making it out the other side of my transition, albeit somewhat scarred, anything else like a steep face covered in fresh powder or chatting to a few friendly travellers should be a cinch.

If you are experiencing grief through gender identity then there are support lines to help you feel less isolated, support you through the process and give you a sounding board of acceptance.