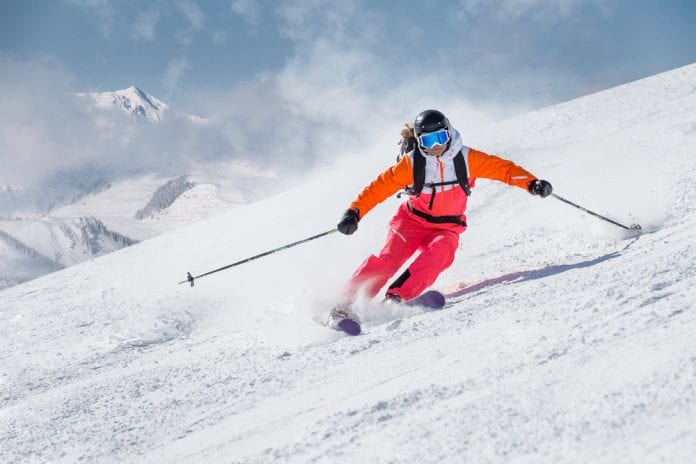 As the ski resort marketing went into hyper drive with a 70 to 90 centimeter snow storm over the last few days, you’d be forgiven for thinking the women were at home baking and cleaning and waxing hubby’s skis. Why? Because I sure didn’t see many of them in resort skiing and riding footage and images.

We receive daily images and both raw and edited video content from resort offices around the world when a snow storm is in full swing, even more so when that snow storm is the first real blizzard of the season. These are used as PR and marketing collateral by resorts in the hope media will pick up and publish them.

However there was a common theme I noticed in my inbox from June 15 to 17 and it wasn’t the truly epic powder shots so early the season, though there were soooo many good ones – it was the lack of women actually skiing and boarding. Yes, there were quality lifestyle images and family shots, but I’m talking about actual action skiing and boarding.

A quick calculation and based on actual skiing and riding images and footage sent to me from all five major Australia resorts, a mere 5% would be female. That’s not a clear representation in my book.

Some resorts, who will for this post remain nameless, actually sent entire media photo and video series intended for press with not one woman in a pair of ski or snowboard boots actually riding the snow. Not waving their hands in the air looking pretty or wandering through snow laden roads on their way to a latte but actually grunting, whooping and cheering in their own snow given right with a lift pass they paid their own money for and skis they carried themselves.

Last I looked women made up over 40% of the skier numbers and over 30% of snowboarding. To not have them represented at all in real time marketing during a snow blizzard when eye ball numbers are high is just insulting.

READ MORE
When She Skis Better Than You Do

Yes I’m peeved. I write about the lack of real female representation over and over and over again and yet little changes. God help me if I suddenly get a flood of female only content instead. That is not the point. Nor is it how young girls and future female ski industry consumers want to consistently be targeted either. For women’s only ski clinics or women specific ski days, yes, but for enjoying the mountain over a season? No.

Yet it is so ingrained in the cultural psyche. A person came up to me after a screening of Anna and Nat Segal’s Finding the Line ski documentary in Australia recently, a film that has a strong narrative and the best storyline editing in any ski related film that has come out of this country (Will to Fly may be the exception). It’s a film about fear first, siblings second, sisters third and gender comes in and out of it.

Really? So I clarified “don’t you mean the best ski film you’ve seen in Australia?”. He thought about it and then said, “yes, actually it is.”

A ski sales rep has been trying to get me onto the ‘girl ski’ in their range. I asked him what was the difference in ski, he said ‘the graphics’. Cue head into hands.

You get the drift.

Hey @perisher_resort & @thredboresort , I’ve noticed you’re open for winter, but are your lifts exclusively open for males this season?? How come all your promotional videos are 90% male riders, and women are only seen walking, drinking and high-5ing. The few females that you do actually film are pole planting perfectly down groomed runs and not ripping through trees, slashing powder like the dudes. What type of message is this sending to the our groms? I know there are amazing female riders on your mountain; they are preparing your parks, loading your lifts, and teaching your guests how to shred. So why aren’t you representing them appropriately on social media?? #shredthepatriarchy #showusdagirls

I’m loving the social media coming out of many Aussie ski resorts this season. Thredbo are being super creative with high quality content and Hotham have been leading the Victorian way with beautiful footage but all resorts are not representing in the female department when it comes to actual skiing and boarding.

Of course I expect a barrage of emails saying “but we don’t have any female ski models they are so hard to find” or “we need to film quickly and our mates ride faster” or “the female ski instructors are booked on lessons and we need to film now” or whatever. It’s all white noise to me, though I do understand the challenges involved.

One regular snowboard film production team once told me that girls aren’t as good at pushing themselves to which I responded, go find them, seek them out, make them count. Don’t leave it up to them, leave it up to you, ’employ’ an intern with the precise focus to find the chicks to film when you need to film them.

If you had daughters wouldn’t you want them to be empowered or at least be included by brands that you love?

We all just want to put ourselves in the picture and imagine ourselves on that powder snow. Men and women. Powder and groomed.

I’ve made mistakes, misread my own audience, objectified others in a moment of shame, we’re all human. Consider this me just not so gently pointing out something you may not have even noticed yourselves. At the end of the day we all want the same thing, a damn good season with lots of snow.

As you were. Well, actually, no, not as you were. #showusdagirls (use it)