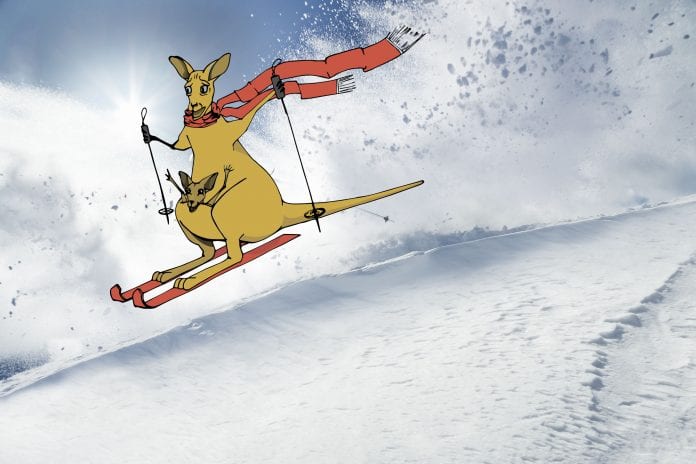 In 2019, pre Covid, I kicked off my own Snowsbest Aussie Tour hitting up Perisher, Thredbo and Falls Creek. I hadn’t been in any Aussie ski fields for years, having been preoccupied with becoming a snow snob in Canada and Japan.

But that was about to change. I was off to reacquaint myself with the gum trees, my old favourite runs, the overpriced hot chips – and I was KEEN. AS.

Not everyone shared my sentiments. The overwhelming response I got – particularly my fellow ski snob friends – was, “oh, that’s going to suck.” Whether it was the snow, the drive time, the activities or the food, people were ready to put it down.

And then I had a lesson with an instructor who spends half the year in Perisher, the other half in Whistler. He was lamenting about the dissing making its way over the Pacific ditch; the amount of skiers and boarders who turn up for a lesson in Whistler, talking about how incredible it is compared to Australia. When he asks where they’ve skied in Australia, they say they’ve never been. They just know it’s ‘shit’.

He’d had enough. And I’ve had enough. My time in the snow this southern winter reminded me how much I’d loved my days on the mountains of our great sunburned land, and all the perks that uniquely come along with Aussie ski fields.

But is this just an extension of our old favourite tall poppy syndrome? Are we being spoiled brats, full of unnecessary negativity?

At the risk of coming across as someone who’s drunk on VB-flavoured Kool-Aid, here are just a few reasons why the haters need to stop honing in on Australian ski fields.

The variety of terrain

That same instructor and I sat on a chairlift together, watching a mogul championship on the run below us. He spoke about growing up travelling to the resorts in New South Wales, and how even when he skies around the world, there’s still a part of him that always misses home.

“The truth is that growing up skiing in Australia prepared me for skiing terrain all over the world,” he said. “And I’ll always be grateful for that experience.”

It’s true. Australia has a reputation for being mellow and flat, but if you know where to go, you can find it all: the steeps, the chutes, the powder bowls on a really good snow day. Hotham has the double black Mary’s Slide, Thredbo has the side country Dead Horse Gap, Buller has the Buller Chutes that have undone many a skier.

And all the rest too – the long, cruisy, perfect groomers; the quick laps on rollercoaster-like bumps; the longer blues that get your legs really burning. The progressive terrain parks, and the epic ones too, so good that the world’s best riders travel from across the world to train here in their Northern Hemisphere off-season.

Louis C.K said it best: “Everything is amazing and nobody’s happy.” He was talking about Wi-Fi on airplanes, but the same goes for snow here in Aus.

Because really! You guys! You are in a nation known best for Bondi Beach, Uluru and really odd-looking animals like the platypus. And we still have some amazing mountains that you can ski here. Which is pretty damn cool.

Some seasons are better than others, and the Aussie season can be short compared to others; but whether it’s a (not so) rare powder day or spring slush, there’s still opportunity to have a great time. Plus we have the major benefit of the resorts having invested big bucks in snow guns, essentially guaranteeing a bit of a snow base once the temperatures drop.

Après in Thredbo at the Denman

Après in Thredbo at Kareela Hutte

Après in Thredbo at Kareela Hutte

It’s no secret that Aussies are fond of a tipple or two, and the right après environment can even give Europe a run for its money. Particularly when it’s Schnappy Hour and they’re pouring shots of Wild Brumby, served up with a side of fondue.

You can drive there

Try driving to Canada from Sydney. Won’t happen. Unless your car also happens to be a submarine,

And while it might take a few hours, you have major benefits – petrol generally costs less than a flight, you can cram in all five of your snowboards and extensive snacks for the week into your car, and you can make a road trip out of it, stopping at cool places along the way.

AND once you’re there you can stay on mountain and ski in ski out in European style villages with an antipodean twist.

You can get a crew going

It’s tough to convince a huge group of people to head overseas together. Everyone’s busy, everyone’s broke, no one can wrap their heads around the logistics of renting a giant Japanese chalet.

Luckily, it’s way easier to rustle up a bunch of mates and head down the road to an Aussie resort. And Aussies are friendly people; even if you’re riding solo, it’s still easy to get on Facebook and find a riding buddy should you be seeking one for the weekend.

Because you can’t go to Alaska and see a wombat or an echidna meandering their way down a ski slope or an emu in a blizzard or drive past a herd of wild brumbies on your way up the mountain. Or admire the efforts of the national park to protect the local pygmy possums.

On-snow concerts with epic artists. Terrain park competitions with really unique features like this year’s Holy Bowly. If it’s worth celebrating, watching or enjoying, an Aussie ski resort probably has it scheduled in – the only tough part may be finding the accommodation for that particular weekend, because everyone else knows that the epic events make it all well worth the trip.

There’s a reason why backcountry in Australia is going through such a serious boom: there is great terrain to be discovered out there, including plenty of heart-stopping steeps to appease even the most hardcore of adrenaline junkies, or cruisy runs to suit even the most nervous of beginners.

Add some of the best views to be found anywhere in the land, plus unique experiences offered up in resort like the Intro to Backcountry Thredbo tours – and you have a mecca that’s just waiting to be discovered.

Anyone who grew up staying in lodges, or who opts to stay in a lodge now, will tell you the same thing – there’s nothing quite like it.

Get up to have a nutritious brekkie before making the most of every single run across the mountain, and roll back in, ready to share your tales from the day with all your lodge mates over a bulk spag bol dinner before cracking out a board game.

It’s simple yet glorious, and unlike staying in lodges in other countries, you can do it every weekend from June through to October if you so choose.

Let’s keep the positivity going… what’s your favourite thing about going to the snow in Australia?

READ MORE
How growing up in a ski lodge shaped my life
Share with your crew
1.4kFacebookTwitterLinkedInEmailPinterest
1.4k
SHARES