Home AU/NZ Snow forecasts Rain and snow, the week ahead for Australia and New Zealand ski... 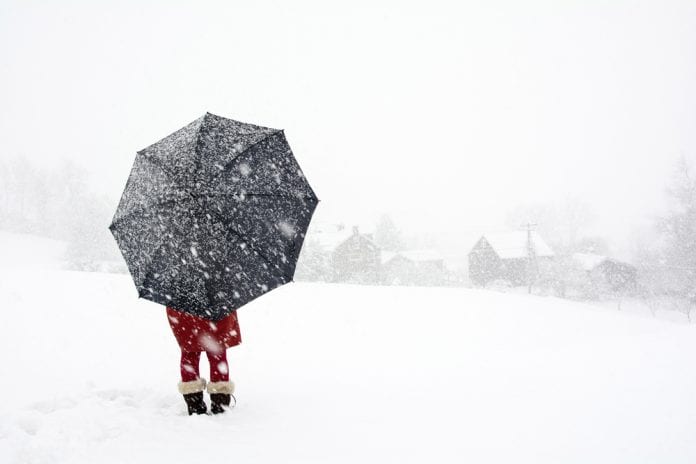 Share with your crew
60FacebookTwitterLinkedInEmailPinterest
60
SHARES
It’s a mixed bag for the Opening Weekend for Australian and New Zealand resorts this long weekend ahead as Alex Zadnik reports.

The ‘R’ word. Rain. No one wants to hear it but it is on the way for the Australian resorts ahead of the opening weekend (don’t shoot the messenger).
A mild northerly airflow is set to develop across Victoria and NSW through the second half of this week, pushing daytime temperatures up by around three degrees on the June average. Snow is a possibility on the higher peaks but for the most part all signs point to rain.
The mild northerly airflow that is expected through Thursday and Friday will be generated as weakening frontal system approaching from WA encounters a large and slow-moving high pressure system over the Tasman Sea. Warm air and moisture with tropical origins will be carried from the Indian Ocean across Victoria and NSW, setting up a rain event for the ski resorts.
The rain with this weakening system will start to fall during the day on Friday and increase at night before an easing takes place on Saturday. This easing should occur for Victorian resorts during Saturday morning and then later in the day for NSW, which is good news for opening weekend festivities that evening.
Rain totals during Friday and early Saturday are likely to be in the 10-20mm range, apart from at Baw Baw which will be in the shadow of the Dividing Range. There is a chance of snow on the higher peaks of the Victorian and NSW resorts but with the freezing level hovering around 2000 metres during Friday night, rain looks like the most likely outcome for the majority of the slopes.
The milder air is highlighted in the chart below from the Australian Bureau of Meteorology, showing above zero temperatures on Friday at a height of around 1600m above sea level. 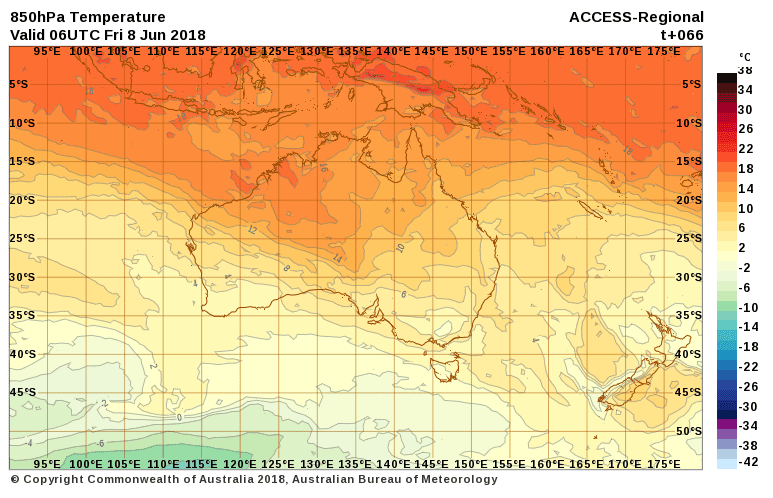 More pleasant weather is likely for the resorts on Sunday, with lighter winds and some breaks in the cloud. However, there is the chance of isolated rain showers redeveloping over the NSW resorts during the afternoon.
Monday should also be a decent day in the mountains with a high pressure system creating fine conditions. Northerly winds will however pick up during the afternoon with the approach of a cold front from the west.

Rain will probably return to the alps on Tuesday ahead of this next front before colder air brings snow into Wednesday. At this stage snow totals on Wednesday do not look overly significant but 5-15cm is possible. There is nothing in the crystal ball to indicate any big snow falls in the week beyond this, so it looks like we’ll be waiting until at least late June or beyond for a decent natural base.
READ MORE
SnowsBest seasonal outlook for the Australian ski season 2018

There’s better news across the ditch this week though it’s been a mixed bag of weather across New Zealand over recent days. A low pressure system brought heavy rainfall to parts of the North Island over the weekend, before a blast of cold air from the Southern Ocean arrived during Tuesday. Snow was observed to low levels on the South Island this morning, with Queenstown and Arrowtown under a blanket of white.
Snow showers will continue across the Southern Alps during Wednesday and become heavier for Ruapehu. A further 5-15cm is likely for South Island ski fields on Wednesday, whilst Ruapehu should see 30-50cm by close of business on Thursday.  A high pressure system will bring a brief break in the weather to New Zealand on Friday, although winds will increase across the lower South Island due to the approach of a cold front.
This front will only delivery a glancing blow to the South Island, with cold air only briefly making an appearance. The result of this will be a burst of rain into Saturday morning, before snow develops at night. The Wanaka (Treble Cone, Cardrona) and Queenstown resorts (Coronet Peak, The Remarkables) should pick up 10-20cm by the end of the weekend, but will have to endure some wet weather to begin with.
The North Island won’t see the impact of this front until early next week, However there is the possibility of occasional snow showers for Ruapehu on Monday and Tuesday, as a cold southeasterly airflow becomes established. A high pressure system is expected to bring clearer skies and cold nights to the South Island through much of next week.
READ MORE
Early ski season snowfall outlook for New Zealand 2018
Check out our snow-forecast page for more detailed snow forecasts for your favourite resort and bookmark Alex’s weekly snow forecast blog for the season ahead.
Share with your crew
60FacebookTwitterLinkedInEmailPinterest
60
SHARES