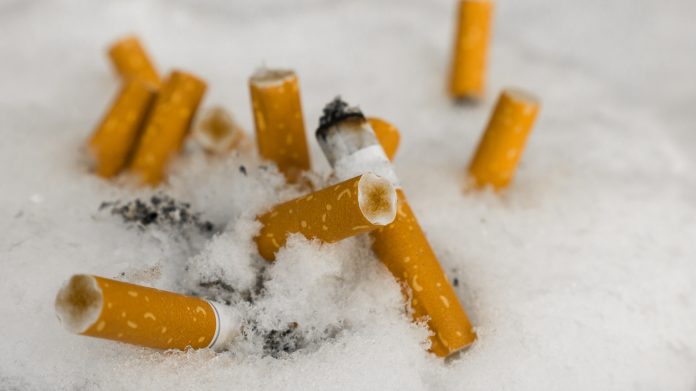 Smoking is now prohibited in the entire communal ski area, both on the ski lifts and on the slopes. Only five smoking areas will be set up for those who still wish to take a “cigarette break”.

“We want to showcase our number one asset which is the clean air of the mountain, which is why thousands of visitors visit us every year,” explains Benjamin Mugnier, who is in charge of the project.

More than 3000 cigarette butts are collected annually on the Les Gets ski area, each representing 150 substances that are toxic to the environment, nearly 4000 pollutants (mercury, lead, arsenic, DDT, butane, ammonia…), up to 300 litres of polluted water or 1m3 of snow (equivalent to 3 bathtubs) and 10 to 15 years taken to break down.

For several years, the resort had been distributing free pocket ashtrays. However, there was a desire to take the approach further in order to drastically reduce this source of significant environmental pollution.

Beyond the environmental aspect, health is also at the heart of the concerns. Indeed, passive smoking is a significant phenomenon on ski lifts, with some skiers occasionally smoking on the same seat as other non-smokers or in queues, sometimes alongside children.

Smoking areas are set up on the ski area to allow those who wish to do so to have a “cigarette break”. Located at the top of the ski lifts, they are marked by banners and equipped with “survey” type ashtrays, made from recycled skis by the cooperative company Skitec. The cigarette butts gathered in the various smoking areas will be collected and recycled into energy, all in partnership with the association Tree6clope.

In line with this comprehensive approach, Sagets (company operating the Les Gets ski and leisure area) has set up a “tobacco way out” programme for its employees. During the employee welcome days, awareness-raising has been put in place in partnership with occupational health, and the company has undertaken to support volunteers who wish to quit smoking, by financing the remainder of the treatment.

READ MORE
Prettiest ski villages for a white Christmas in Japan, France or Italy
Share with your crew
152FacebookTwitterLinkedInEmailPinterest
152
SHARES